Alistair J. McGowan
Graduated from the University of Glasgow in 1994 with a B.Sc.. (Hons) in Geology and Applied Geology. Returned to full time study in 1997 and gained a MSc. in Palaeobiology from the University of Bristol in 1998, during which ADAPTS was written as a research project. Currently working towards admission to Ph.D. candidate status at the University of Chicago. Currently involved with the evolutionary dynamics of Triassic ammonoids, with particular reference to mass extinctions and associated biotic recovery episodes. 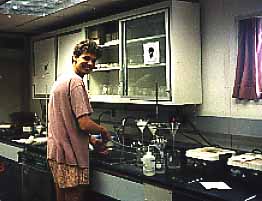 Paul Pearson is a Royal Society University Research Fellow in the Department of Earth Sciences at the University of Bristol. His main research interest is organic evolution in the context of environmental change. He specializes in the study of microfossils from the deep sea, which provide an unrivalled record of evolutionary change over many millions of years. He is particularly interested in questions like: How can fossil species be recognized? How do species originate? Do they have characteristic lifespans? Does the tree of life have a "random" shape, or are there patterns and biases within? What causes extinction? How does evolution interact with processes of environmental change?