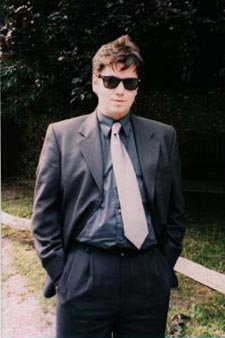 Jon Adrain is a native of Northern Ireland, and was transplanted early in life to the wilds of western Canada. He received a BSc from the University of Alberta in 1989, then a PhD in 1993 on trilobite faunas of the Canadian High Arctic. Moving to the University of Western Ontario for a two year post-doc, he continued with what has become six years of fieldwork in the 24-hour summer sunlight of the archipelago of islands near the magnetic north pole (polar bear, or rather POLAR BEAR! count: 13). 1995 saw a move to the Natural History Museum to work on the role of trilobites in the great Ordovician Radiation. He has for the past three years traded summers that were too darn cold for ones that are too darn hot, and now spends his time wandering around the Cambro-Ordovician of the Great Basin, in Nevada and Utah. He does empirical work on silicified Lower Paleozoic assemblages and describes trilobite species as a hobby. Current research areas include global diversity trends and taxonomic databases, high-level trilobite phylogeny, and trilobite evolution and development. This summer he is marrying Tiffany Foster, Curator of Fossil Plants and Bryozoans at the NHM, and the couple plan to set sail for the USA, city, institution, and position TBA.