Borja Cascales-Miñana is a biologist working on several evolutionary aspects of vascular plants and on experimental botany. He works on the plant fossil record, focusing on the main episodes of plant life, with special interest in Devonian floras in relation to the evolution of early terrestrial ecosystems and in the Carboniferous seed ferns. In these fields, his scientific activity is focused on digitization and construction of palaeontological databases and the use of inference methods and kinetic modelling in palaeobiology to elucidate the diversity dynamics of vascular plants through geological time together with fieldworks to provide new data and evidences. 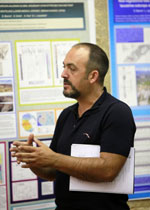 José B. Diez works on several aspects of palaeobotany. His research is focused on taphonomy, biostratigraphy, palaeogeography, and palaeoclimatology. He graduated from the University of Zaragoza (Spain), where he also obtained his Ph.D. in Geological Sciences. In addition he received a PhD in Palaeobiology from the University Pierre et Marie Curie, Paris-6 (France). Since 2001 he has held a teaching position at the University of Vigo.