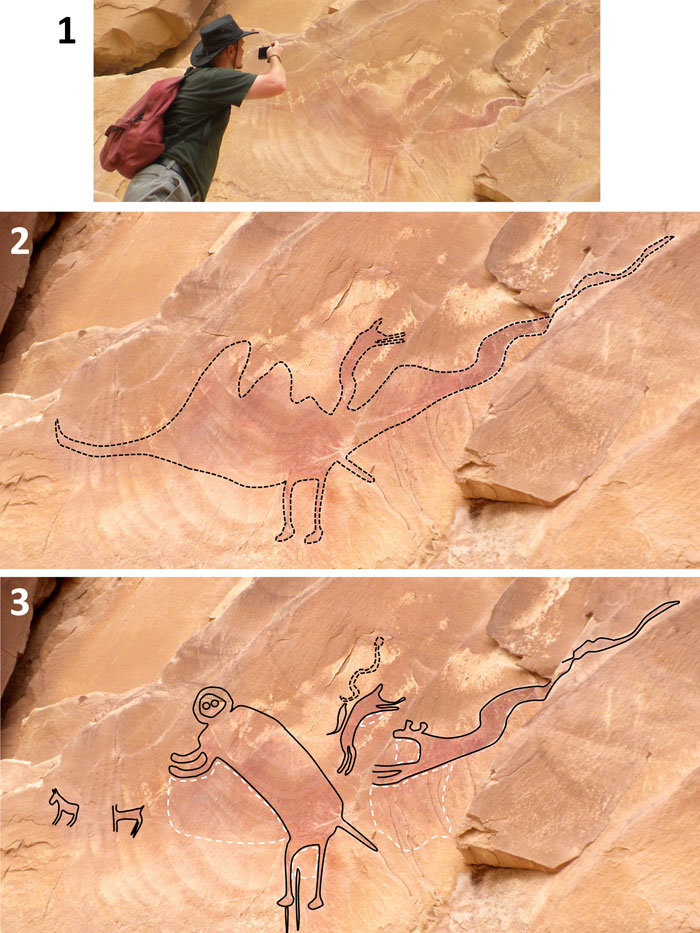 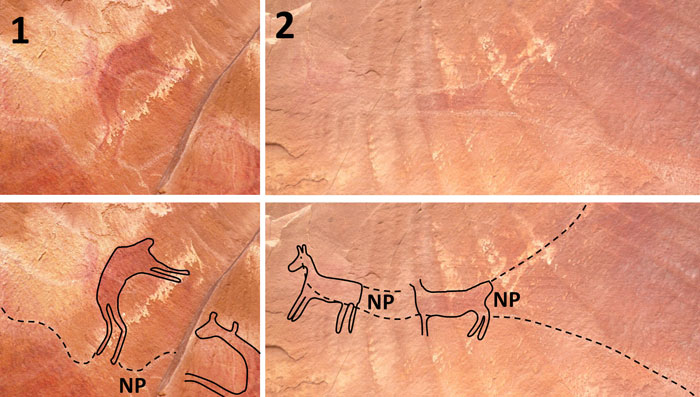 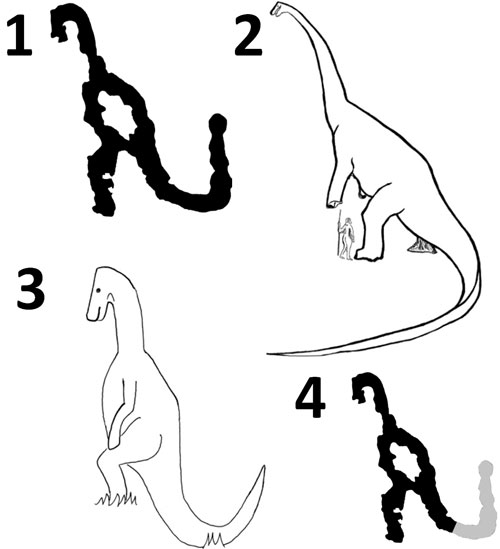 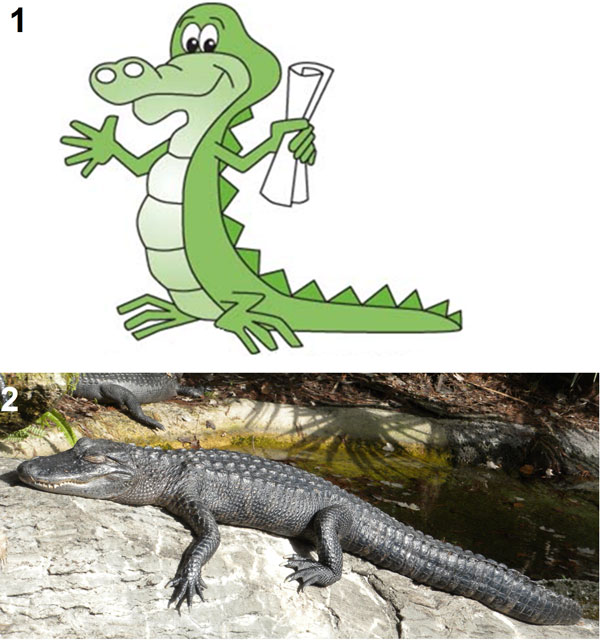 FIGURE 5. Southwestern rock art images, illustrating stylistic conventions that show that the petroglyph in Figure 3.1 is not a quadruped but a bird with a foot extension. 5.1. Petroglyphs from lower on the same panel as the "dinosaur" in Figure 3.1, showing an upside-down, J-shaped crook (indicated by red arrow) and bighorn sheep with all four limbs shown (from Hubbard, 1927). 5.2. Bighorn sheep painting at Kachina Bridge, Natural Bridges National Monument, Utah, with all four limbs shown. 5.3. Petroglyphs at Pictograph Point in Mesa Verde National Park, Colorado, showing an anthropomorph with an extension on one foot (left), two anthropomorphs connected by foot extensions (middle), and another anthropomorph with an extension on one foot (right). 5.4. Bird depictions in southwestern rock art, showing that a hooked line represents the head and neck of a stylized bird and that a stylized bird may have an open ovoid shape for a body; sources (clockwise from upper left): photo by author, taken at Pictograph Point; Turner 1971, fig. 20; Turner 1971, fig. 99; Schaafsma 1986, fig. 87; six bird images from Cole 2004a, fig. 4; Cole 2009, fig. 91; Cole 2009, fig. 99; all but the one from Schaafsma (1986) are from the Pueblo II – III periods.

FIGURE 6. A second alleged dinosaur petroglyph from Havasupai Canyon (from Beierle, 1980). The animal is actually a rabbit or a bighorn sheep drawn in a style peculiar to the Pueblo III period. 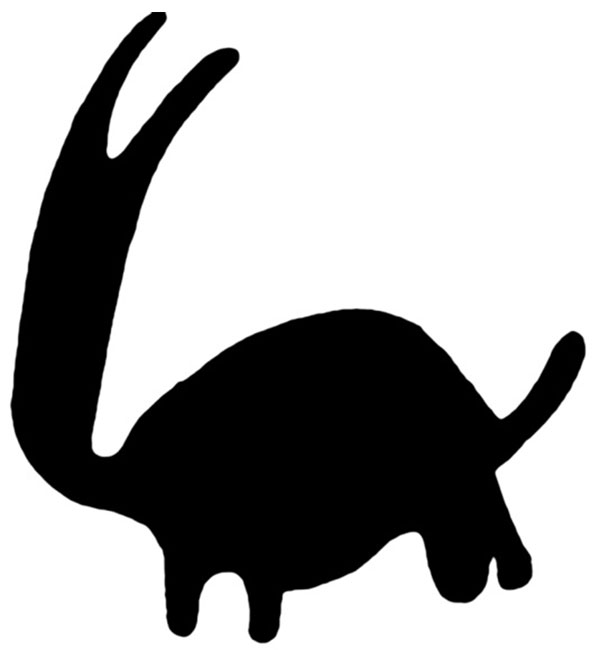 FIGURE 7. Tanzanian rock art depicting giraffes, from Kohl-Larsen and Kohl-Larsen (1958). 7.1. A giraffe that Mackal (1987) considered a sauropod dinosaur. 7.2. Other giraffes from Tanzanian rock art, showing that the alleged sauropod is actually a giraffe; of these three, the one on the left is from the same panel as 7.1.

FIGURE 8. A group of three paintings of short-necked quadrupeds, probably lizards, from Clark (1959). Mackal (1987) called the animals long-necked and implied that they are sauropods. 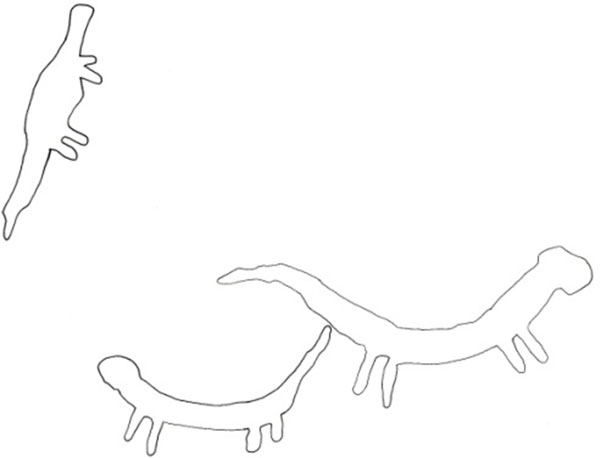 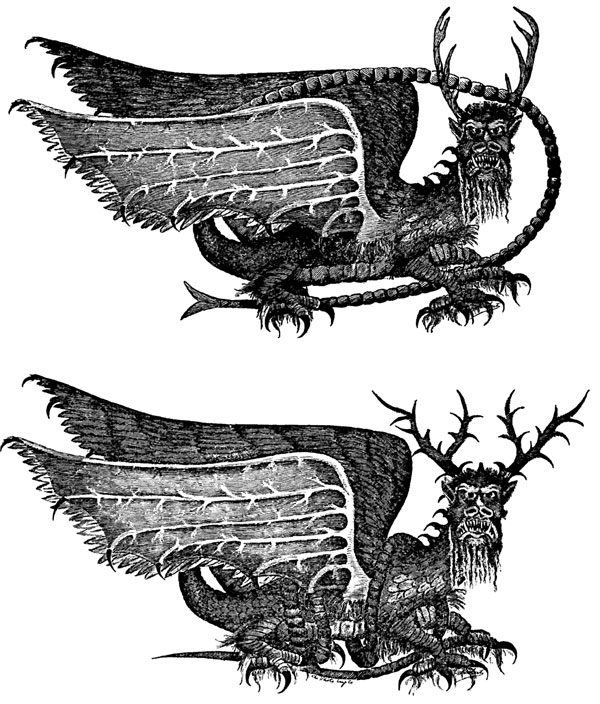