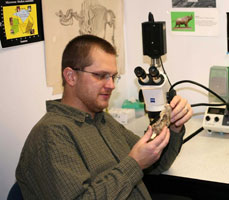 Matthew Mihlbachler’s primary career interest is the evolutionary paleobiology of Cenozoic mammals. He has conducted field research in Asia, Africa, and throughout North America. His research is focused on the systematics, dietary paleoecology, biogeography, functional morphology, and paleopoplulation demography of perissodactyls, with particular interest in understanding the role of climate change in biotic evolution. However, his interests in climate change and evolution has led him into investigation of other groups such as Quaternary proboscideans, rodents, artiodactyls, and early condylarths. Presently, Mihlbachler is focused on understanding dental wear as a proxy for animal-environment interaction to test hypotheses about climate and morphological adaptations. He is also currently involved in field activities in the late Eocene-Oligocene transition in Mongolia and northwestern North America to better understand intercontinental faunal dynamics during that time interval. 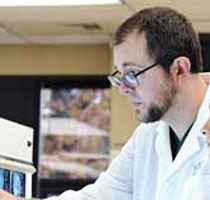 Brian Beatty's research is focused on exploring paleobiological methods, especially on secondarily aquatic tetrapods as model systems to explore the nature of functional morphology and convergence. He is especially interested in variation and the physical interactions of animals with their environment as manifest in their feeding ecology, tooth function, enamel microstructure, dental microwear, and oral pathology. Work refining paleobiological methods has led to a focus on modern aquatic groups (including Sirenia, Cetacea, Pinnipedia, Lutrinae, Crocodylia, and Chelonia) as well as terrestrial groups (Artiodactyla, Perissodactyla, Rodentia, Squamata). Fossil groups in which he is exploring how these methods can be applied include such disparate groups as Desmostylia, Embrithopoda, Multituberculata, Phytosauria, Metriorhynchoidea, Placodontia, and Mosasauria.