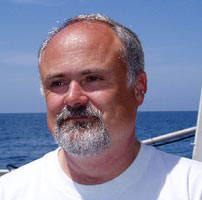 Greg currently works as the Deputy Sanctuary Superintendent and Research Coordinator for Gray's Reef National Marine Sanctuary in Savannah, Georgia, where he coordinates scientific investigations into the ecology and oceanography of hard-bottom reefs. He worked for seven years with Dr. Joe Pawlik in the Chemical Ecology Laboratory of the University of North Carolina at Wilmington where he studied the ecology of tropical sponges. He served as the Assistant Science Director for UNCW's National Undersea Research Center for a year after receiving a M.S. degree from UNCW's Marine Biology program.
Prior to graduate work, he obtained a B.S. degree in Biology from West Virginia University. Greg spent five years as a commercial diver before attending college and was trained as a US Navy Diver while serving in the military. He grew up in Little Rock, Arkansas, and graduated High School in Duncanville, Texas, and always enjoyed spending lots of time in and around the water. 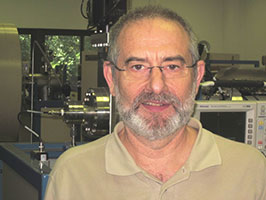 Alex Cherkinsky, Ph.D., is a Senior Research Scientist and Biogeochemist at the Center for Applied Isotope Studies (CAIS) at the University of Georgia. His research interests include the applications of AMS to archaeology, geology, hydrology and the environmental sciences.
Alex has interests in the development of new techniques for AMS sample preparation, measurement and data analysis and has developed novel approaches for radiocarbon dating of ultra-small samples. He has long-term interests in soil chemistry and soil carbon, and his research on the radiocarbon dating of soil is internationally recognized. 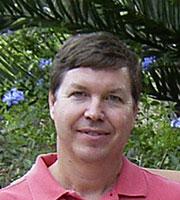 Scott Noakes, Ph.D., is a marine scientist and geochemist with research interests primarily focused on the development of sensors for real-time in situ measurements of the marine environment. His work with sensors has extended into methane gas hydrate detection and carbon dioxide monitoring in the ocean, and he has worked to develop a system that can be used to map hydrate deposits in the deep water of the Gulf of Mexico. Scott also has led a marine paleontological research project producing evidence of two extinct Atlantic gray whales of Pleistocene age in coastal Georgia waters. He presently serves as Director of the Scientific Diving Program for the University System of Georgia. His current research interests include ocean acidification and its detection and measurement using surface and near-surface sensors.