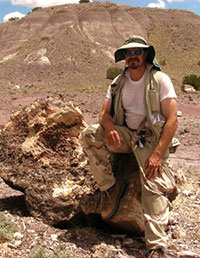 Heckert's research interests revolve around Late Triassic stratigraphic, biostratigraphic, and paleontologic issues, focusing primarily on microvertebrates, but he enjoys ranging up and down the section, and has collected vertebrates ranging in age from Devonian to Pleistocene, conducting field work across the American West and now in his new home state of North Carolina. 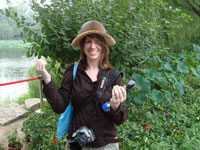 Jessica Miller-Camp earned a B.S. in Geology from Appalachian State University in 2007 where she studied the tooth enamel microstructure of several archosaurs. Since then she earned an M.S. in Geoscience at the University of Iowa (2010) for a geometric morphometrics study of the dicynodont Lystrosaurus. She is currently enrolled as a Ph.D. student at the University of Iowa undertaking a dissertation on the phylogenetics, taxonomy, biogeography, and morphology of Alligatorinae.