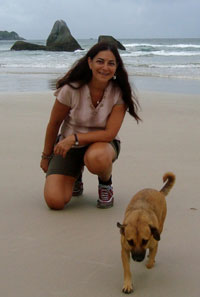 Sandra Gordillo is an Argentinean researcher at CONICET (Consejo Nacional de Investigaciones Científicas y Técnicas). She graduated and defended her PhD thesis at the National University of Córdoba and received postdoctoral training at the University of Saskatchewan, Canada (1997-1998). Her research focuses on Quaternary mollusk shells, mainly in comparison to their extant relatives. She has participated in paleontological fieldwork mainly in Argentinean Patagonia and in southern Chile. She has also been involved in fieldwork in New Zealand and on Antarctic expedition. In 2011 she obtained a DAAD-CONICET grant for a scientific visit to the AWI Bremerhaven in Germany. Her interests are related to faunistic changes on different time scales and to the understanding of the palaeoenvironmental history of Quaternary molluscs in southern South America and Antarctica. In this context, she is especially interested in biotic interactions recorded on shells, mainly as predation marks such as drillholes. She is also currently involved in arquaeomalacology in cooperation with archaeologists from Argentina. She has authored and co-authored around 50 articles on taphonomy, systematics, paleoecology, paleobiogeography and paleoenvironmental reconstruction based on Quaternary molluscs. For more information please see http://grupomalacologiacicterra.blogspot.com.ar/