FIGURE A1. Plot of superellipse exponents k (x-axis) against superellipse correction factors Cm (cross-sectional areas, mass, and the contribution of a frustrum's point mass to I of an entire body) and CI (for an individual frustrum's I) relative to an ellipse (y-axis). The polynomials enable area calculations with exponents of greater than one significant figure (Table A1). 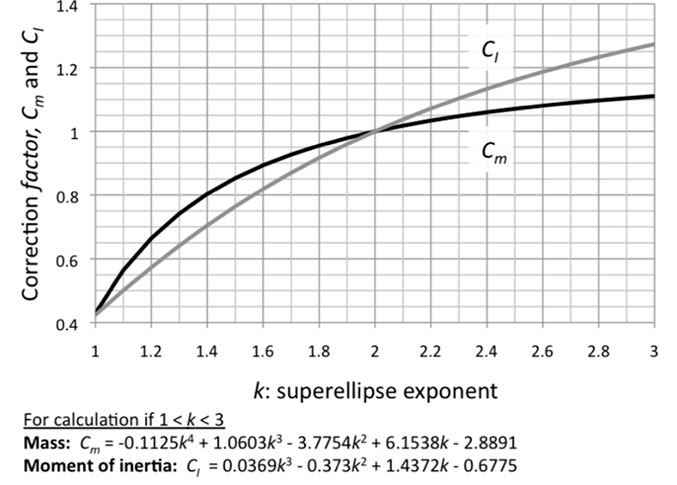 TABLE A1. Superellipse exponents (k) and coefficients for determining mass (Cmass) and mass moment of inertia (CI) relative to these quantities for an elliptical frustrum (k=2.0). Cmass is for conversion of both mass and the contribution of a frustrum's point mass to I of a body part from its center of rotation. CI is for conversions of Ix,y,z for any individual frustrum. The inverse of a coefficient gives mass or I for an ellipse if the quantity is known for a shape with another exponent k.

APPENDIX 2.
Derivation of mass moment of inertia I for super-elliptical frustra

Solid Edge and other modeling software calculate inertial properties (mass, center of mass, and mass moment of inertia). The geometry for these properties will be especially accurate with NURBs ellipsoids deformed to drape over a skeleton (Mallison, 2010, 2011), for example, as in an animal's thoracic region. For a model with non-deformed ellipsoid cross sections, it is useful to estimate how differing cross-sectional shapes would affect mass m and mass moments of inertia I about orthogonal axes.

Here, x and y are variables, a and b are semi-major and semi-minor axes, and exponent k governs the shape's curvature. In an ellipse, k=2.

For an object with superelliptical cross sections, the following equation gives mass moment of inertia about a vertical axis y, with n segments (each i), and radii from dorsal to ventral (DV) and lateral to medial (LM).

A given segment's density is

are respective averages of dorsoventral and mediolateral radii of the segment's anterior and posterior faces. The distance ri is the radius from the center of rotation of a body to the center of mass mi of segment i. Critically, C is a unique constant for a given superelliptical cross section of exponent k from equation 5 (as long as k is the same for front and back cross sections).

Fmax for a superellipse, and hence for I and m for objects with superelliptical sections, can be calculated using exponent k. Mosen (2009) provides a general equation for Fmax (although not for I or m), using the inverse of k. The equation becomes simpler when k is calculated and substituted algebraically.

B is a beta function incorporating gamma functions defined as 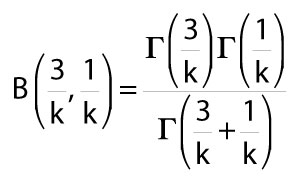 Substituting all terms and expanding equation 3, we obtain mass moment of inertia of an individual superellipse-based frustrum i about a vertical axis.

Mass and Iy vary predicably with the exponent used to define each superellipse cross section, and can be calculated by multiplying the ellipse values by a correction factor. Table A1 presents correction factors for superelipse-section frustra of varying exponents k, including that of an ellipse (k=2). Figure A1 plots these coefficients, and fitted polynomials that enable calculation of areas with exponents of higher significant figures. Common cross-sectional shapes for terrestrial vertebrates, with exponents of 2.3–2.5 (Motani 2001), result in masses 5–7% greater than for elliptical cross sections. This discrepancy supports Motani's (2001) findings that elliptical cross sections substantially underestimate body volume. I y of individual frustra increase more rapidly than mass as exponents exceed k=2, from 10–16% greater as k ranges from 2.3 to 2.5.

1. Right-click on the joint and obtain "Info". This dialog box identifies the i and j markers.

2. Copy the angles of the i marker's global axis orientation.

4. Paste the i marker's angles in place of the listed j marker's.