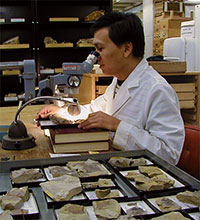 Hongshan Wang is a paleobotanist at the Florida Museum of Natural History, Gainesville, Florida. He has been serving as Paleobotany Collection Manager at the museum since 2003. He received degrees from Lanzhou University (BA in Geology), China University of Geosciences (MS in Paleontology and Stratigraphy), and the University of Florida (MS in Computer Sciences and Ph.D. in Geology with a minor in Botany). He is interested in plant fossils from the Late Paleozoic to the Tertiary. His current research is on Cretaceous and Paleogene angiosperms. 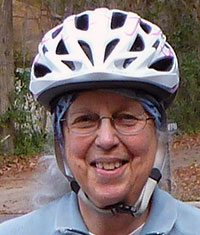 After completing a master’s degree in botany at Cornell, I had the great good fortune to work in Harlan Banks’ paleobotany lab. Relocating with my husband to Indiana did not result in any botanical opportunities for me so I morphed into a neuroscientist. After nearly 30 years of research work in this field, I retired to Gainesville, Florida and found my way back into paleobotany at the Florida Museum of Natural History. 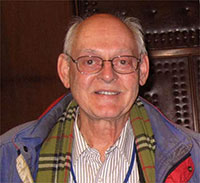 As a graduate student, I began to collect fossil plants from the Eocene of the Mississippi Embayment in the clay pits of Mississippi, Tennessee and Kentucky in 1959. After completing my Masters degree at the University of Minnesota in 1960, I moved to the University of Illinois to work with Ted Delevoryas. During my two years at Illinois, I collected several hundred fossils from the newly-opened Warman clay pit and other clay pits in the area. When Delevoryas returned to Yale in 1962, I followed him. My bulky collection of angiosperm leaves, fruits , seeds and flowers were too difficult to transport to Yale. However, in the lignitic clay of some clay pits I had found some leaves so well preserved that they could be lifted off the surface of the clay intact. On the surface of these leaves there was an abundance of well-preserved fungi. I collected several hundred of these leaves which fit in two cigar boxes. So I took these to Yale and focused on fossil fungi for my dissertation and after two years at Yale graduated with my Ph.D in 1964. The following year, as an NSF postdoctoral fellow with R. Krause at the Senckenberg Museum of Natural History in Frankfurt am Main, Germany, I again began to work on angiosperm leaves. From 1966 to 1990, while a faculty member at Indiana University, I, my family and my students continued to collect tens of thousands of fossils from the Upper Cretaceous and Eocene clay sediments of the Mississippi Embayment. In 1990 I took this collection with me to the Florida Museum of Natural History.