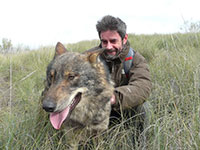 Alfonso Arribas Herrera is a paleontologist whose research covers taphonomy, taxonomy, biostratigraphy and the paleobiogeography of large Quaternary mammals. Alfonso holds a degree in Geology and a Ph.D. in Paleontology from Madrid’s Complutense University. He works for the Geological Survey of Spain, and is head of the Estación Paleontológica Valle del Río Fardes in Fonelas (Guadix Basin, Granada). He has a deep concern for the conservation of Spanish wildlife, especially the Iberian wolf. 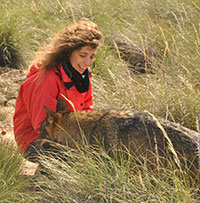 Guiomar Garrido Álvarez-Coto is a paleontologist whose research covers the taxonomy of large Quaternary mammals. Guiomar holds a degree in Biological Sciences (Zoology) and a Ph.D. in Paleontology from Madrid’s Complutense University. She works for the Geological Survey of Spain and has been part of the Fonelas Project since 2001. In 2006 she completed her doctoral thesis on the systematic paleontology of large mammals from the Fonelas P-1 Early Pleistocene fossil site (Guadix Basin, Granada, Spain). Guiomar is involved in the conservation of the Iberian wolf (Canis lupus signatus), a species endangered by a disastrous management plan that allows annual killings because of conflicts with farmers.