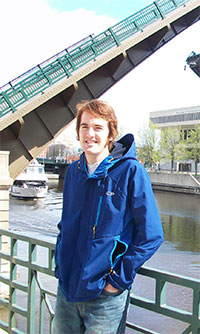 Starting with a childhood obsession with Dinosaurs, Nicholas B. Sullivan has never wavered from a goal of studying paleontology and geology as a career. In 2010, he received a bachelor’s degree in geological sciences from the State University of New York at Geneseo, where he participated in research on the conodont biostratigraphy and depositional history of Middle Devonian strata in New York and Mongolia. In 2013 he received a master’s degree from the University of Cincinnati where he studied the depositional history and stratigraphic relationships of Silurian strata in the Appalachian Foreland Basin. Following this, he worked at the Wisconsin Geological and Natural History survey and helped establish a conodont biostratigraphy lab. He is currently teaching geology courses at Westminster College in Salt Lake City, Utah. His research interests include conodont biostratigraphy, sequence stratigraphy, the temporal and spatial controls on marine authigenesis, and Paleozoic strata in the northeastern United States. 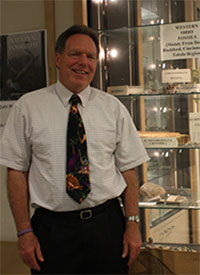 Mark Kleffner has been involved in research on Silurian conodonts and strata since his senior thesis on the Telychian/Sheinwoodian Estill Shale of northern Kentucky and southern Ohio 35 years ago. His current research interests include Ordovician/Silurian and Silurian/Devonian boundary strata and conodonts, Aeronian-Telychian strata and conodonts of the North American Midwestern Arches and Basins region (NAMBA), Salina Group of NAMBA, and development of a multitaxa- and event-based high-resolution Silurian chronostratigraphy. All of Mark’s current stratigraphic studies utilize a combination of conodont and chitinozoan biostratigraphy and 13Ccarb chemostratigraphy. He completed his PhD on Silurian chronostratigraphy and Silurian strata and conodonts of NAMBA at The Ohio State University, and following a year as a Lecturer on the Columbus campus of Ohio State, has been at the Lima campus of Ohio State, where he is the sole member of the School of Earth Sciences. 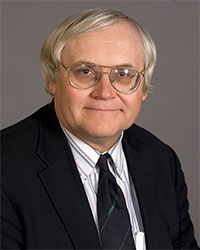 Carl Brett earned his Ph.D. at the University of Michigan in 1978, and moved that same year into a faculty position at the University of Rochester. In 1998, he joined the Department of Geology at the University of Cincinnati, where he is currently Professor and Director of Undergraduate Studies. He has spent some four decades researching the paleontology and stratigraphy of the mid Paleozoic strata of eastern North America and elsewhere. He maintains strong interests in taphonomy, paleoecology, evolutionary paleobiology and sequence stratigraphy and is noted for introduction of the concepts of taphofacies, coordinated stasis, echinoderm paleoecology, and the mid Paleozoic predator revolution.

Among the highlights of his career are the receipt the Paleontological Society’s Schuchert Award; his election as a fellow of the Paleontological Society and of the Geological Society of America; his receipt in 2008 of the Digby McClaren Medal for Lifetime Achievement in Stratigraphic Paleontology; and his receipt in 2005 of an Alexander von Humboldt Research Prize. He is the 2012 recipient of the Raymond C. Moore Medal of SEPM for sustained excellence in paleontological research and 2013 recipient of the AAPG’s Grover Murray Outstanding Geological Educator award. Carl has published some 300 peer-reviewed papers, and five edited books, and has supervised more than 50 graduate students.