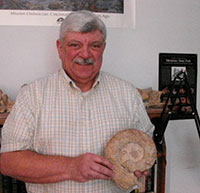 John taught high school Earth Science for 32 years before retiring in 2004. From 1995 until it ceased publication in 2011, he authored the “An Amateur’s Perspective” column for the newsletter magazine of the Paleontological Research Institution, American Paleontologist. For the past 40 years, John’s research has been focused on Upper Ordovician Turinian nautiloids of the American Midwest. He has collaborated with the now late Rousseau H. Flower and is now working with Robert C. Frey.