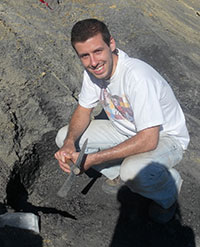 David Peris is born in Valencia, Spain in 1986. He was graduated in Biology at the Universitat de València in 2009 and he obtained his MSc in Evolutionary Biology between the University Complutense of Madrid and the Autonomous University of Madrid, in 2010. In 2011 he started a PhD at the Universitat de Barcelona and he is currently coursing his third age. David is interesting in all concerning “amber world”. Although his first incursion with the palaeontology was with Holocene subfossil mites, along his MSc research, he has published his most relevant papers on Cretaceous fossil beetles in amber, the aim of his PhD studies. He is currently focused on Early Cretaceous beetles (Insecta: Coleoptera) embedded in Spanish amber and other ambers worldwide. 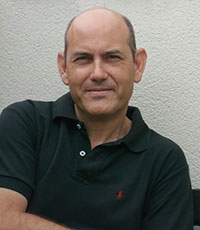 Xavier Delclòs is born in Lleida, Spain in 1962. He studied Geology in the University of Barcelona where he graduated in 1986. In 1991 he obtained his doctorate in the University of Barcelona, and became Lecturer in 1993. In Barcelona he focused his research on fossil insect’s palaeobiology and the exceptional fossil preservation. He started his work on Cretaceous insects preserved in rocks in 1985, and from 2000 he combines with the palaeobiological studies of arthropods preserved in Mesozoic and Cainozoic ambers. Since 2005 he has been coordinating the team that studied the Early Cretaceous amber of Spain. Today he is author of 125 publications on fossil insects and invertebrate palaeontology. His last research is focused in the amber-bearing deposits formation, in comparison with the recent tree resin producer’s ecosystems, and the palaeoecology of the Early Cretaceous insects.

Carmen Soriano is born in Madrid, Spain in 1976. She studied Biological Sciences (specialty Zoology) in the Universidad Autonoma de Madrid where she graduated in 1999 and achieved her Master Science Degree in Paleontology in 2001. She obtained her doctorate with honors in Geology in 2006 in the Universitat de Barcelona, supervised by Dr. Xavier Delclos, with a project title "Coleopterans from the Lower Cretaceous of Spain: Paleobiology and taphonomy". In 2008 she had her first doctoral stage in the Universite de Rennes I, France. In 2009-2010 she worked at the European Synchrotron Radiation Facility in Grenoble. Since then, she has been coordinating the different amber related projects at the ESRF.

Vincent Perrichot is born in Brittany, France in 1976. He obtained his Ph.D. in biology at the University of Rennes in 2003, on the study of Cretaceous amber deposits from France and their corresponding forest ecosystems. He spent two years at the Natural History Museum of Berlin as a Humboldt research fellow, working with Alexander Schmidt on the paleoecology of resin-producing forests through the study of arthropods and microorganisms fossilized in amber. He then became a postdoctoral fellow at the Paleontological Institute of the University of Kansas, where he worked on the systematics, phylogeny, and biogeography of hymenopteran insects from various Mesozoic and Cenozoic ambers. In 2009 he returned to the University of Rennes as a full time assistant professor. Since then he has been studying the paleobiota and paleoenvironments of various Mesozoic and Tertiary ambers, using synchrotron imaging at the ESRF on a regular basis to visualize fossils in opaque amber. In parallel with his main research topic on the evolution of insects, he is studying modern resin-producing forests in order to understand the processes involved in the trapping of organisms by tree resins.