APPENDIX. Three-dimensional rendering of an ammonoid specimen (YPM 23122). This video created in 123D Catch (Autodesk, Inc., 2013) demonstrates the accuracy of this photogrammetric software in creating 3D digital representations. Despite errors or holes around the lower shell margin or keel, the exposed, topside lateral surface of the shell is accurately recreated; features such as ornamentation and flank convexity are realistic in their digital representation in comparison to the actual specimen from which the model was made (refer to Figure 3 for sample photographs used to generate this model). Click on image to run animation. 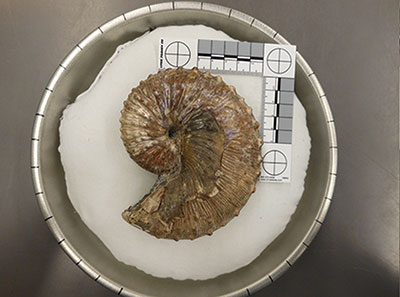