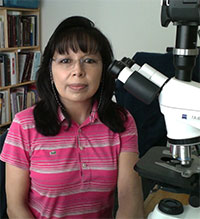 ELIA RAMÍREZ ARRIAGA is a researcher at the Institute of Geology, Universidad Nacional Autónoma de México (UNAM). She received a B.S.c degree in Biology from the UNAM in 1989, majoring in Palynology, and has been working since 1992 in the UNAM Palynology Laboratory, Paleontology Department, Institute of Geology. She achieved an UNAM Ph.D. in Biological Sciences in 2005, for doctoral research on Cenozoic palynostratigraphy based on pollen grains and spores. She currently teaches Palynology in the Biological Sciences Postgraduate Program, UNAM, and conducts research on both Cenozoic Palynology and Actuopalynology (Melissopalynology and Aeropalynology). She has experience working with Paleogene and Neogene palynofloras recovered both from south-central continental Mexican paleobasins and from marine paleobasins in Baja California Sur. She is contributing to the systematic taxonomy of Cenozoic pollen grains and spores, as well as to the study of Cenozoic evolution of Mexican plant communities, with particular emphasis on semiarid vegetation from Morelos, Puebla (Tehuacán-Cuicatlán Valley), Oaxaca and Baja California Sur, Mexico. 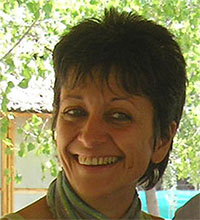 MERCEDES B. PRÁMPARO is senior researcher at the Consejo Nacional de Investigaciones Científicas y Técnicas (CCT-CONICET-Mendoza, Argentina). She has been a palynologist at the Argentinian Institute for Snow, Ice and Environmental Research (IANIGLA) since 1984. She has a degree in geology and received a PhD from the Rio Cuarto University, Cordoba, Argentina in 1989 for a thesis on the Early Cretaceous spores, pollen grains and algae of a central-western lacustrine Argentinian basin. She has mainly worked on the Mesozoic palynology of both continental and marine basins in Argentina. Her current interests include the palynostratigraphy of the lower Cretaceous, K/T boundary, Paleogene of central-western Argentina, Bolivia and Mexico, palynomorph provincialism, and the paleoenvironmental and systematic classification of pollen, spores and dinoflagellate cysts. She participated (January to April 2008) in an applied scientific research project at TNO, Utrecht, the Netherlands, on the Jurassic and late Cretaceous biostratigraphy of a northern sea basin. She was member of the Ameghiniana (the journal of the Argentinian Palaeontological Association) editorial board between 2003 and 2007.

ENRIQUE MARTÍNEZ-HERNÁNDEZ received a B.Sc. degree in Biology from the Universidad Nacional Autónoma de México (UNAM) in 1970, majoring in Botany (Palynology). He worked on the description of recent pollen from the vegetation of Laguna Madre, Tamaulipas, Mexico. Shortly thereafter, Enrique obtained a postgraduate scholarship at Michigan State University, East Lancing, U.S.A. under Dr. Aureal T. Cross, his research was on the Upper Cretaceous palynostratigraphy of the Mesa Verde Group in Craig, Colorado, U.S.A. Upon graduating in 1975, Enrique became professor of palynology at the UNAM, in which he has worked on northeastern, northwestern and south-southwestern Mexican Mesozoic and Cenozoic paleobasin, focused on palynostratigraphy of pollen spores and dinoflagellates; on the other hand, Professor Martínez has participated in the study of recent pollen (Melissopalynology and Forensic Palynology). He has produced a collection of recent pollen with close to 12,000 samples, and has processed nearly 11,000 pre-Quaternary rock samples. Enrique has formed working palynology teams in other Mexican universities such as the Instituto de Antropología e Historia, the Universidad Metropolitana, and the Instituto Politécnico Nacional.