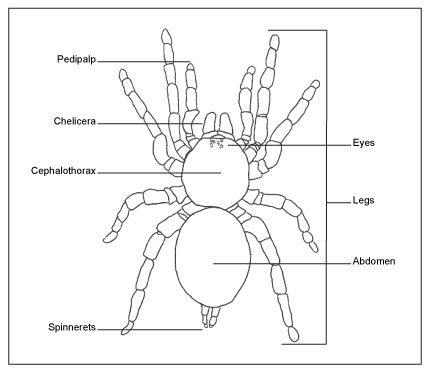 FIGURE 3. Quantitative properties of burrows. 1, Measurements of burrows included maximum depth (D), slope (OA), total length (L), branching angle (BA), and tunnel and shaft width (w), height (h), and circumference (c). Width is defined as parallel to the hinge-line of the burrow trapdoor; height is defined as perpendicular to the hinge-line of the burrow trapdoor. 2, Complexity (C) is the sum of the number of segments (s), chambers (h), and surface openings (e) of a single burrow system. 3, Tortuosity is a measure of the average sinuosity of all of the segments of a burrow system. The tortuosity of a single segment is found by dividing the total length (u) by the straight-line distance (v). Modified from Hembree et al., 2012. 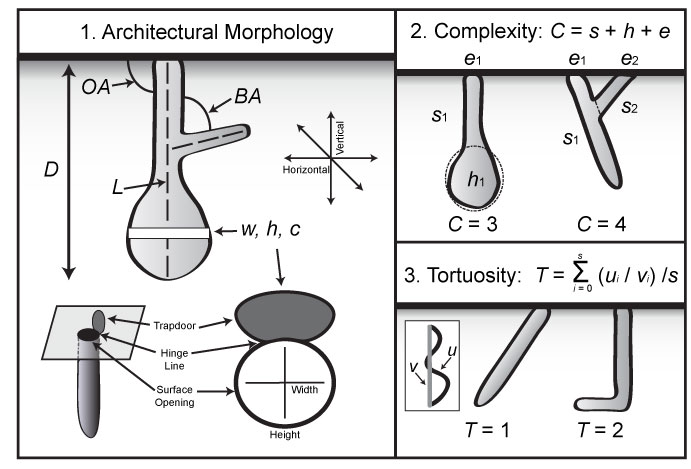 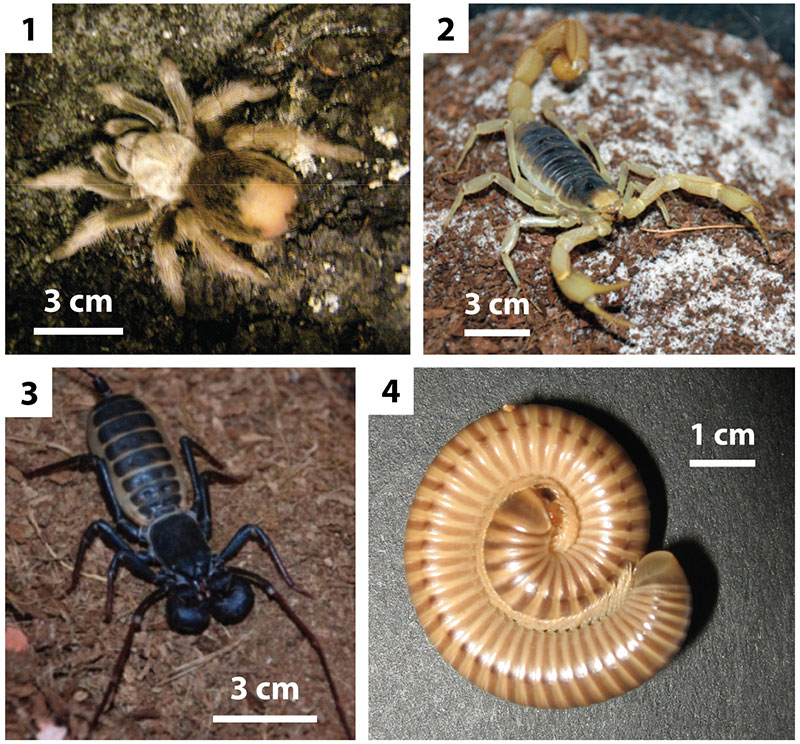 FIGURE 5. Burrow production by Hogna lenta. 1-2, Spider pushes headfirst into the sediment until it is nearly covered. 3, Spider turns around inside the chamber to face outward. 4, Spider applies silk to the sediment and moves it around. 5, Spider covers itself in silk-lined sediment. 6, Spinnerets gathering sediment together to form a trapdoor. The sediment surrounding the spider and its burrow has been lightened. 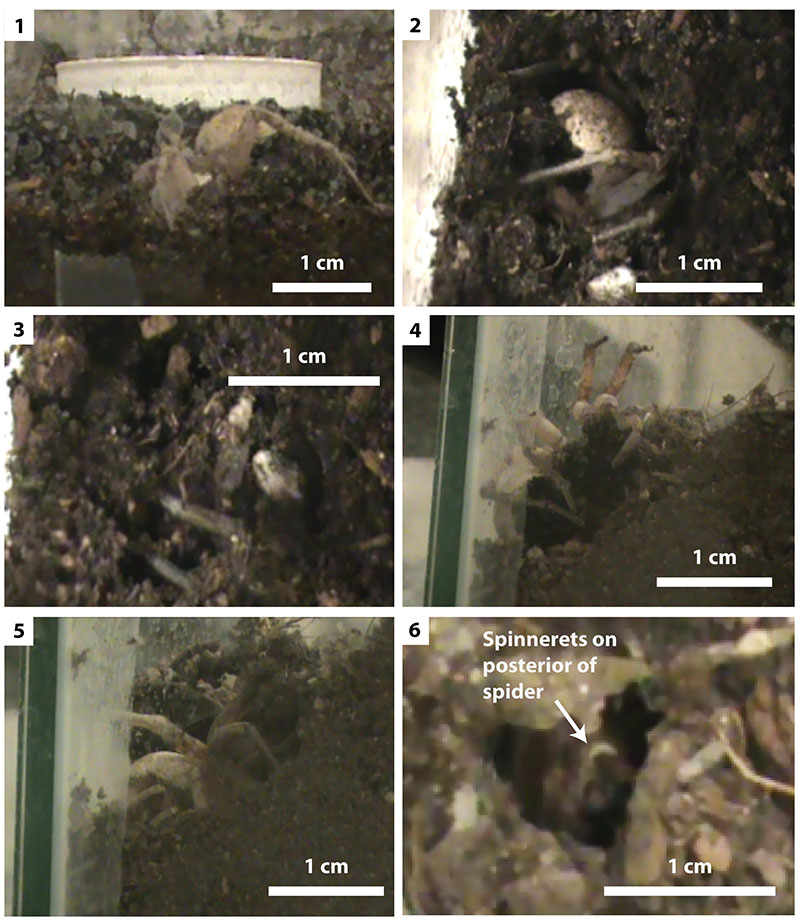 FIGURE 6. Brooding behavior of Hogna lenta. 1, An egg sac. 2, H. lenta with offspring. 3, A vertical shaft (H5) that served as a brood burrow. 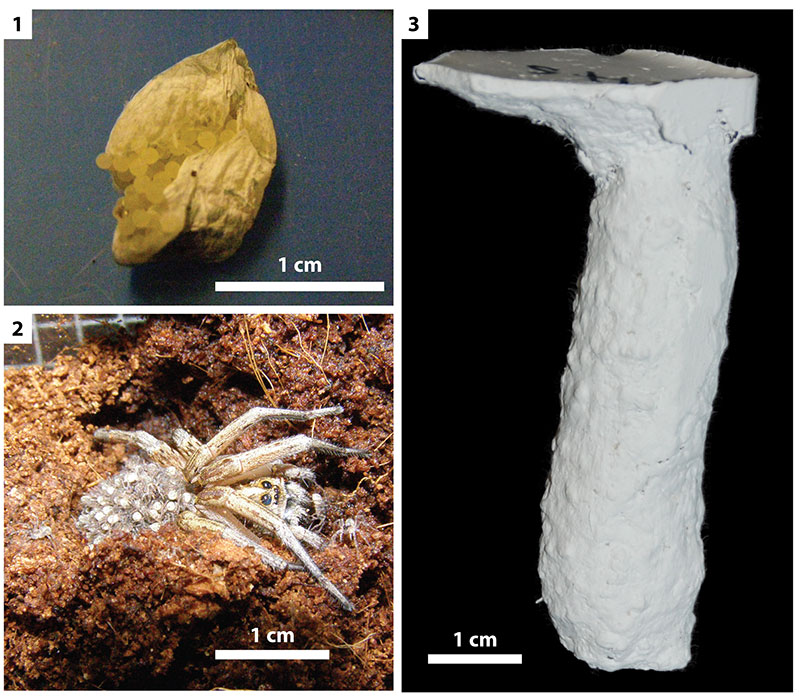 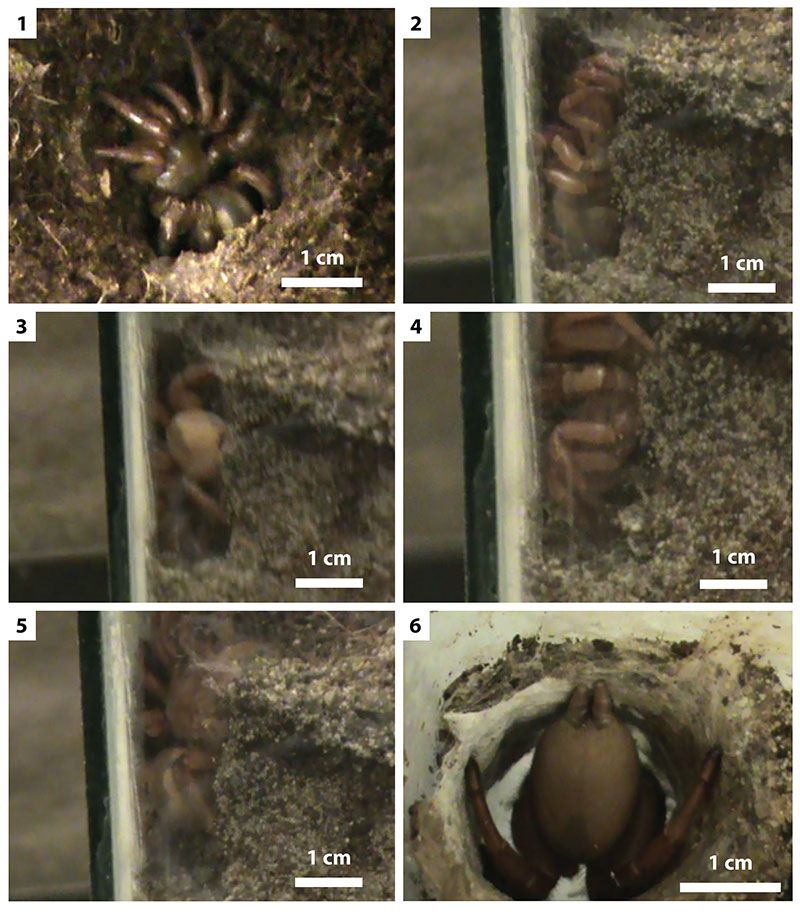 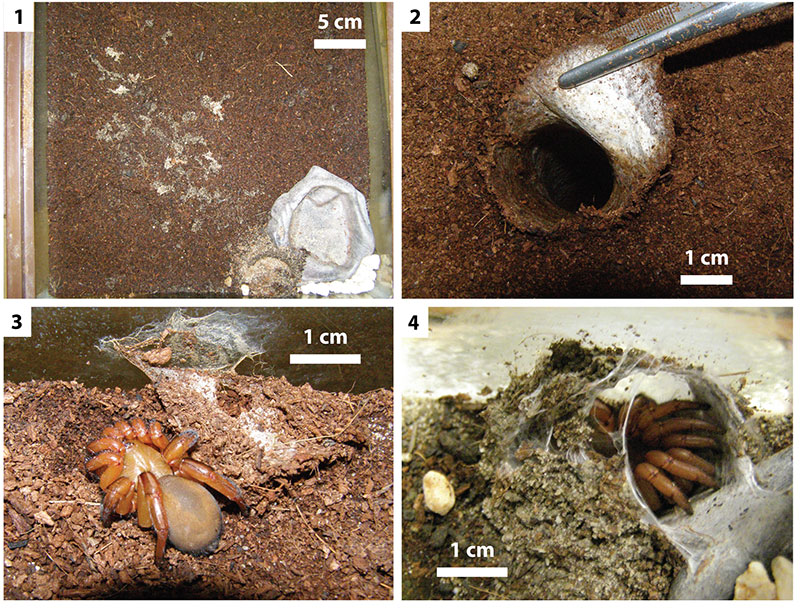 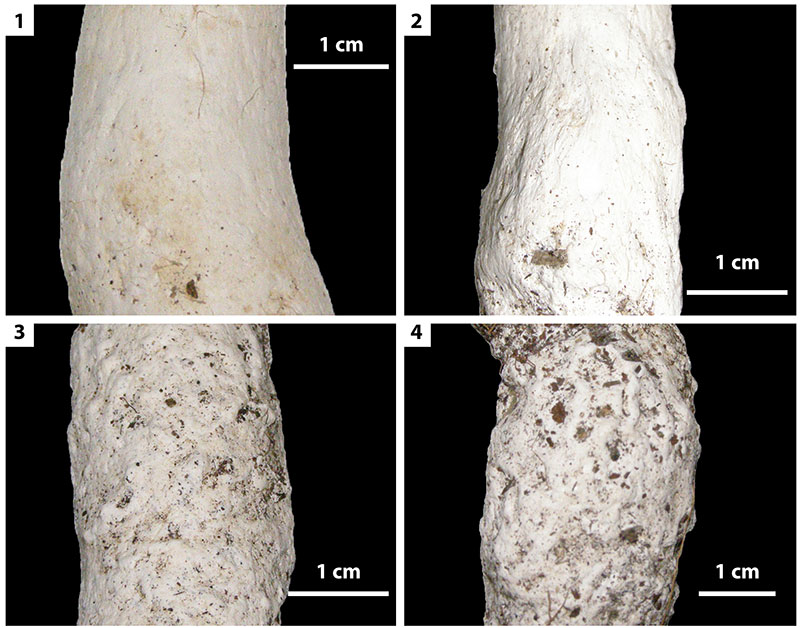 FIGURE 11. Changes in surficial features due to increasing stability of sediment. The spiders used less silk as sediment becomes more stable. This resulted in burrow casts with rougher sides than those with more silk. The first burrow was constructed in sediment composed of 50% silt-clay and had a thick silk lining. The third burrow was constructed in 100% silt-clay and had almost no silk lining. 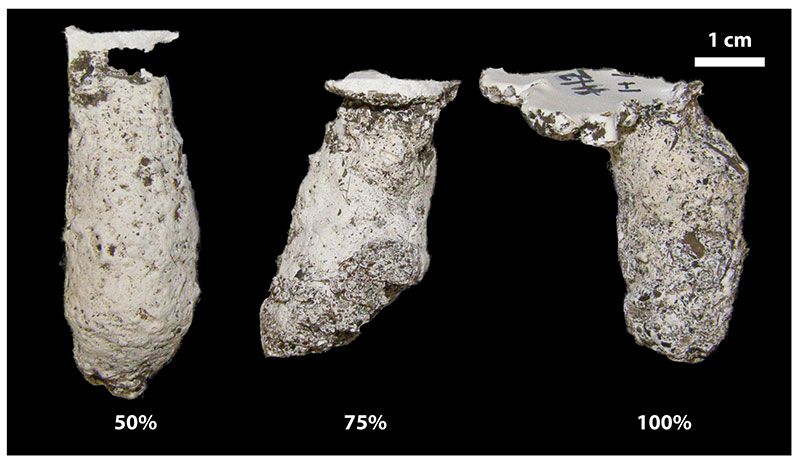 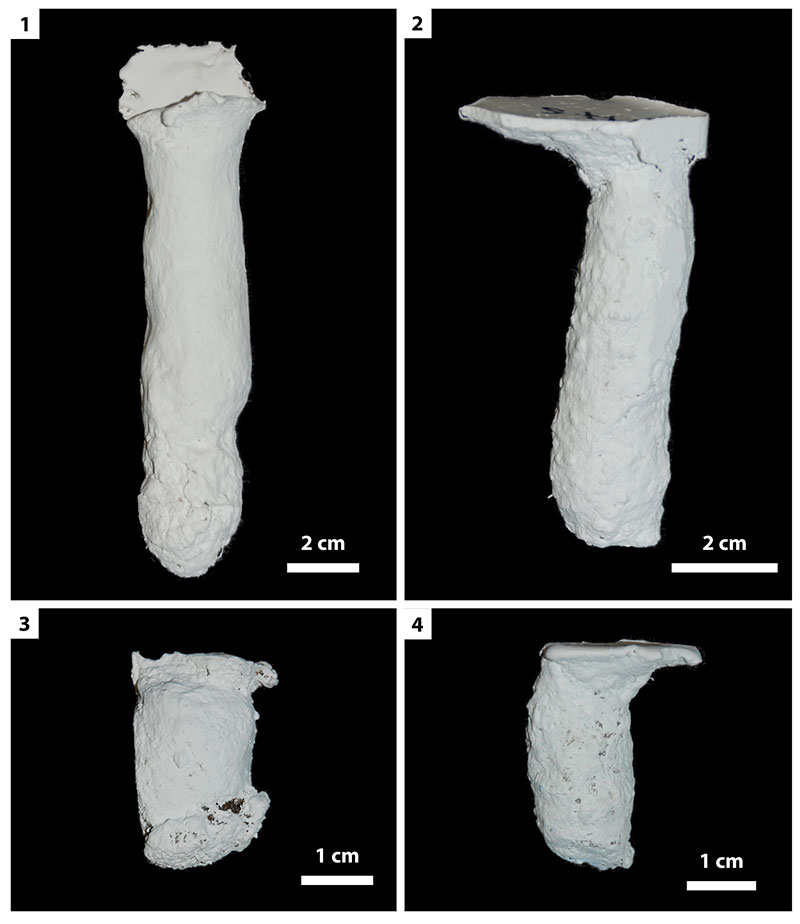 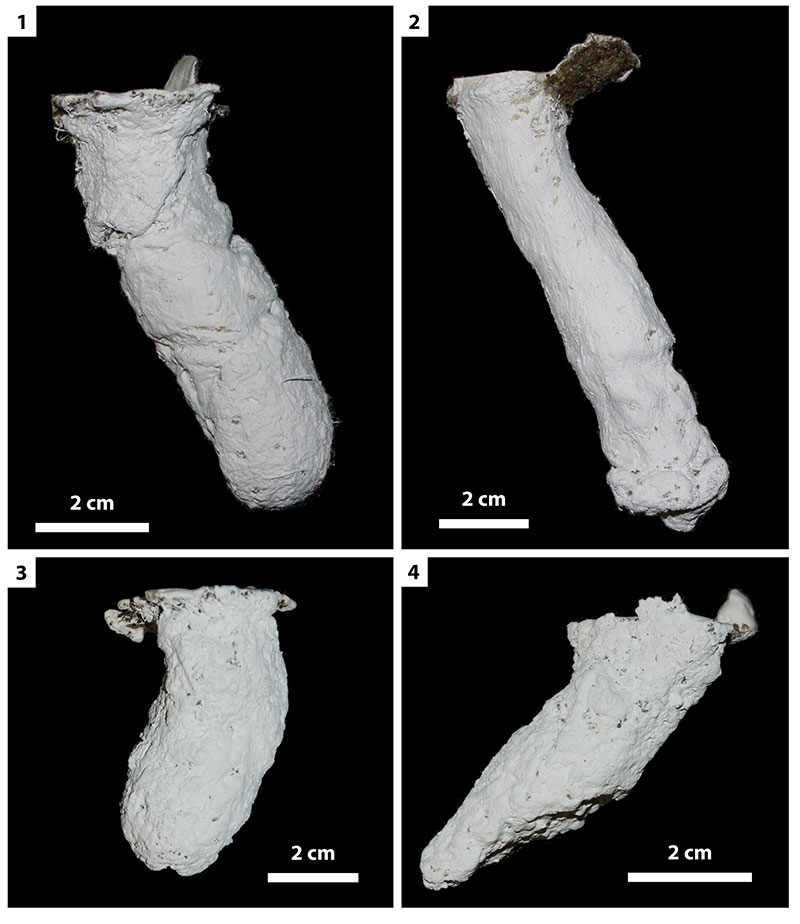 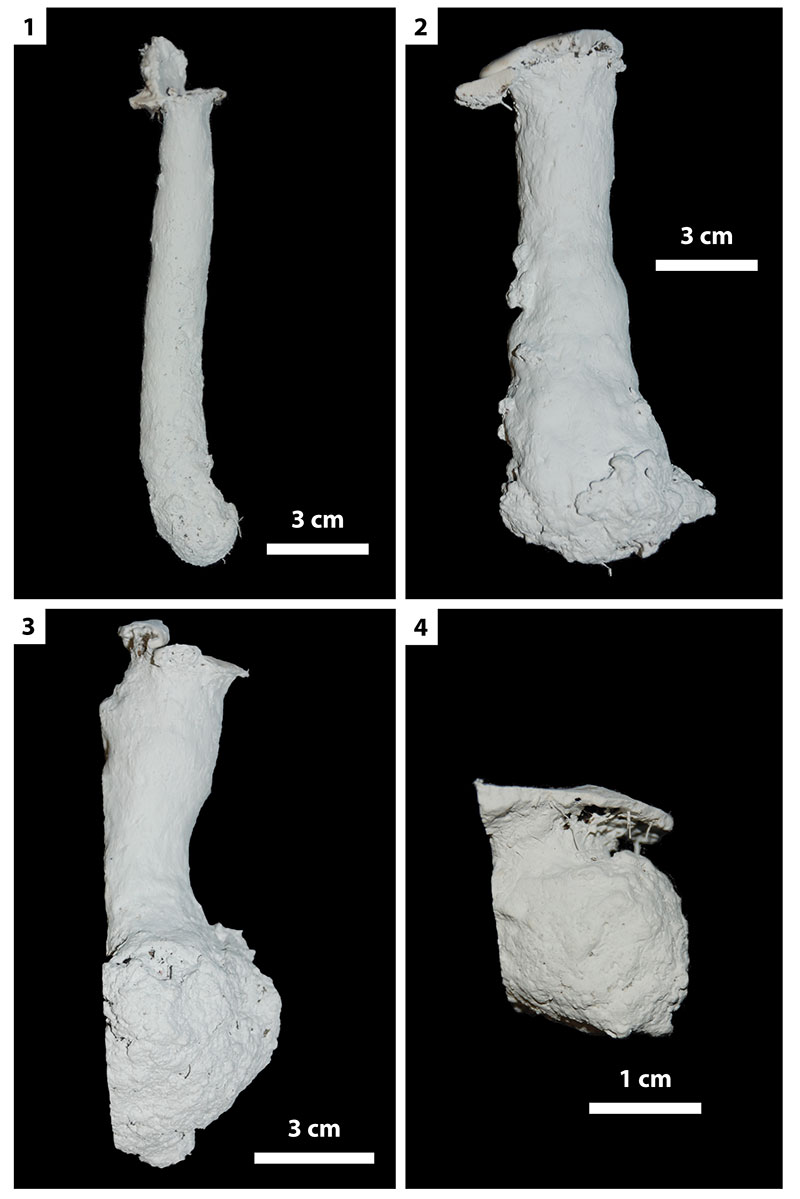 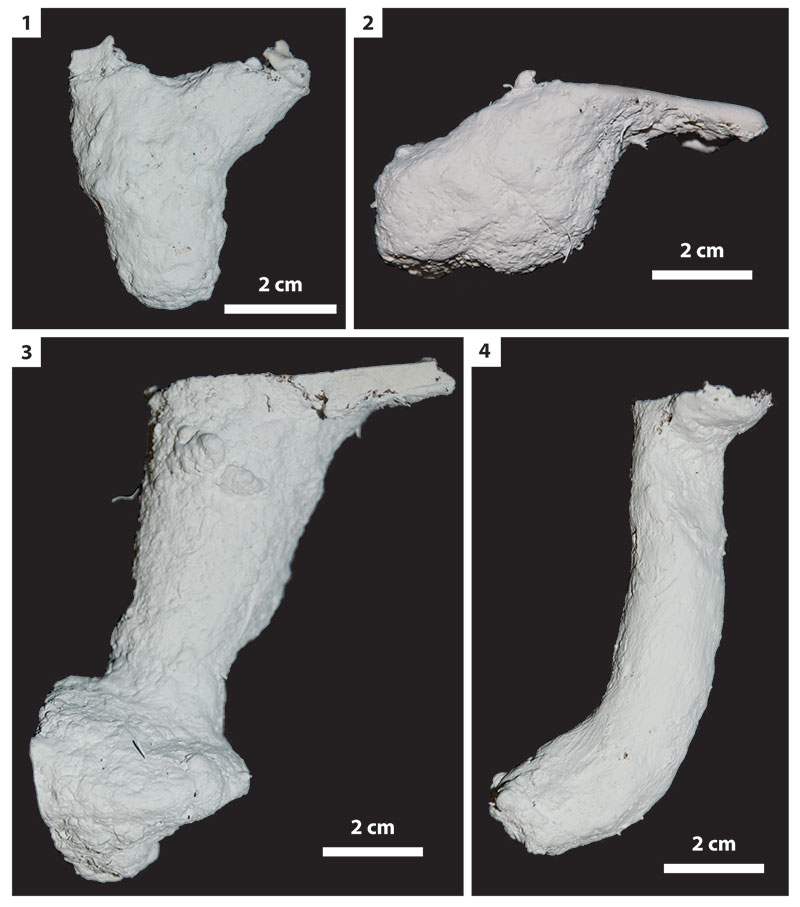 FIGURE 16. Cluster analysis of all burrows produced by Gorgyrella inermis in the study. Cluster A contains burrows with a vertical component. Cluster B contains burrows with a subvertical component and two burrows with vertical components. Values located at the nodes of the dendrogram are the mean Bray-Curtis similarity score of all burrows emanating from that node cluster. Brackets above the dendrogram group together main clusters and provide the mean Bray-Curtis similarity score of the burrows in that cluster. Clusters indicated by letters in yellow circles are clusters of spider burrows that form in all analyses. Burrow architecture is indicated in the key at the bottom of the figure; see Table 1 for key. Tracemaker is indicated by the color of the box with the associated name. 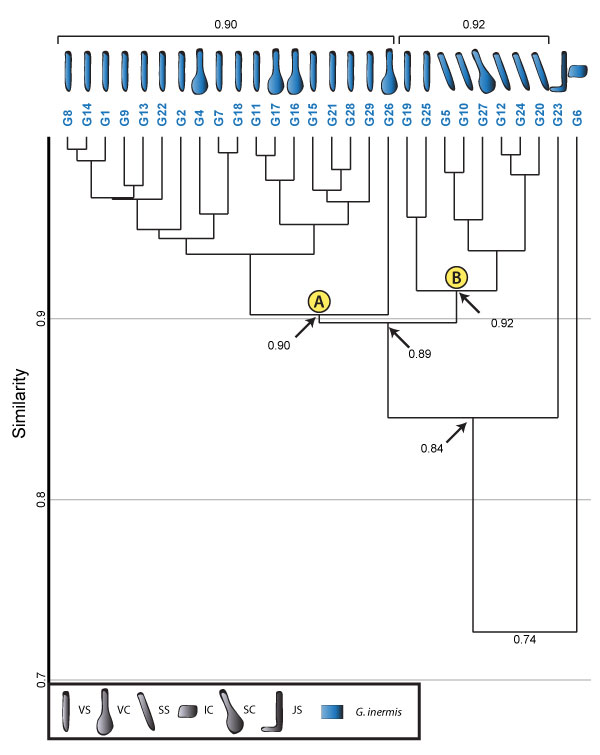 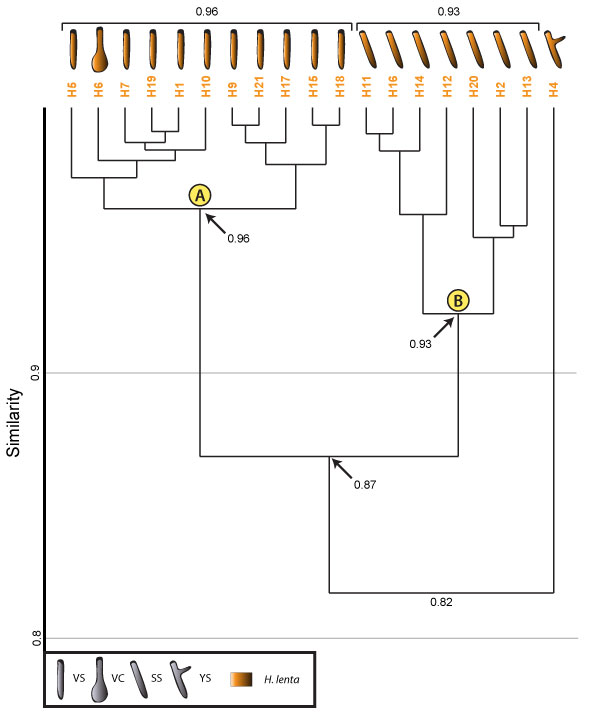 FIGURE 18. Cluster analysis of all burrows produced by Gorgyrella inermis and Hogna lenta. Clusters A (vertical) and B (subvertical) are maintained, but an additional cluster, C, forms. Cluster C contains the J- and Y-shaped burrows. The isolated chamber is not included in any cluster. Formatting is the same as in Figure 16. 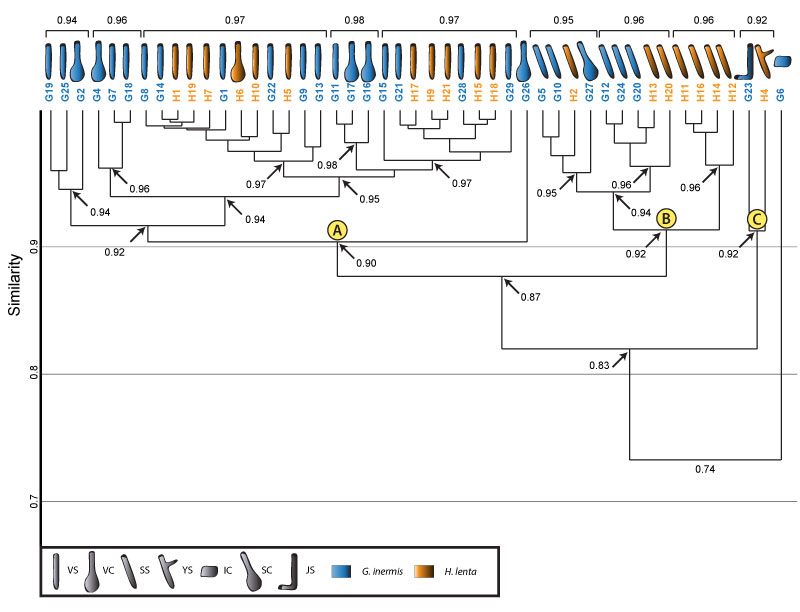 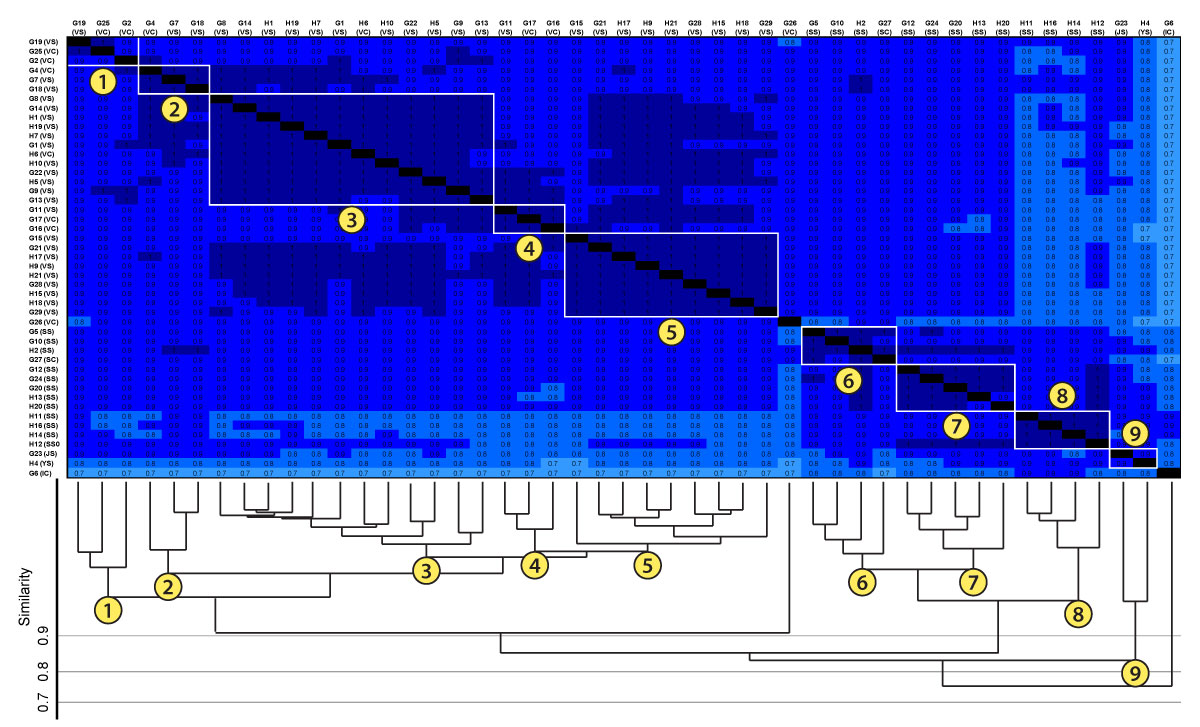 FIGURE 20. Cluster analysis of burrows produced by Aphonopelma chalcodes, Gorgyrella inermis , and Hogna lenta. Clusters A, B, and C are maintained, and the burrows G6 and A2 form a new cluster. The larger A. chalcodes burrow, A1, does not fall into a cluster. Formatting is the same as in Figure 16. Clusters indicated by letters in blue circles form only in this analysis. The subvertical ramp (SR) is an architecture unique to A. chalcodes. 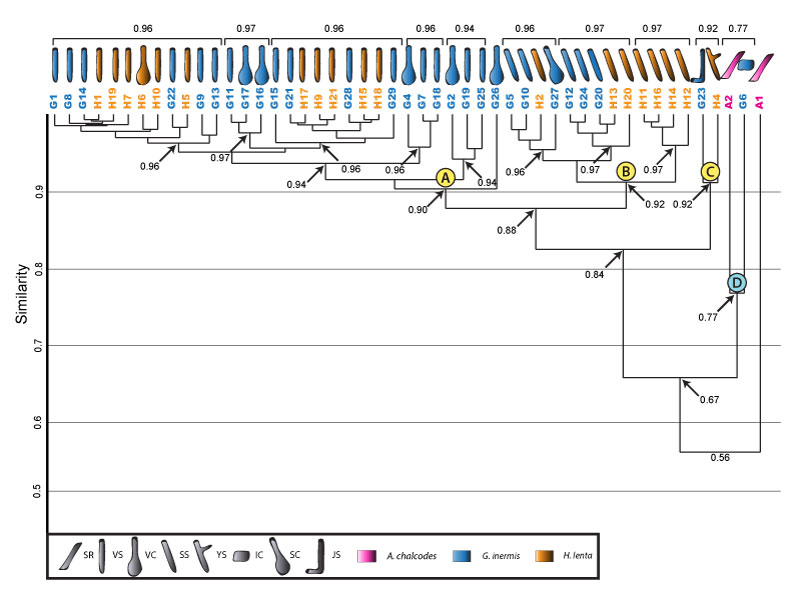 FIGURE 21. Cluster analysis of burrows produced by Hadrurus arizonensis, Gorgyrella inermis, and Hogna lenta. Spider Clusters A, B, and C are maintained, and a separate scorpion cluster is produced. Formatting and key is the same as in Figures 16 and 21. Mazeworks (MW), U-shaped burrows (US), subvertical ramps (SR), and helical burrows (HB) are produced H. arizonensis. 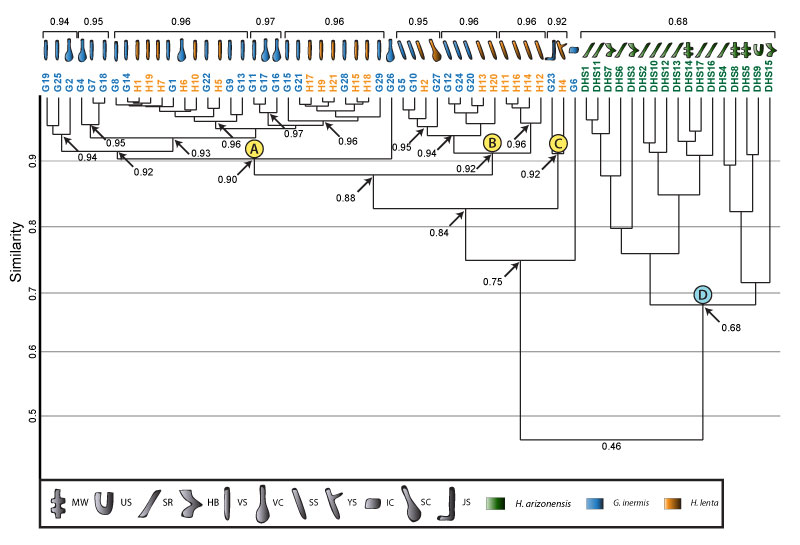 FIGURE 22. Cluster analysis of burrows produced by Mastigoproctus giganteus, Gorgyrella inermis, and Hogna lenta. Spider Clusters A, B, and C are maintained with the addition of morphologically similar whip scorpion burrows, and G6 forms a new cluster. Unique burrow architectures produced by M. giganteus form a separate cluster. Formatting and key is the same as in Figures 16 and 21. Mazeworks (MW), U-shaped burrows (US), and subvertical ramps (SR) are produced only by M. giganteus. 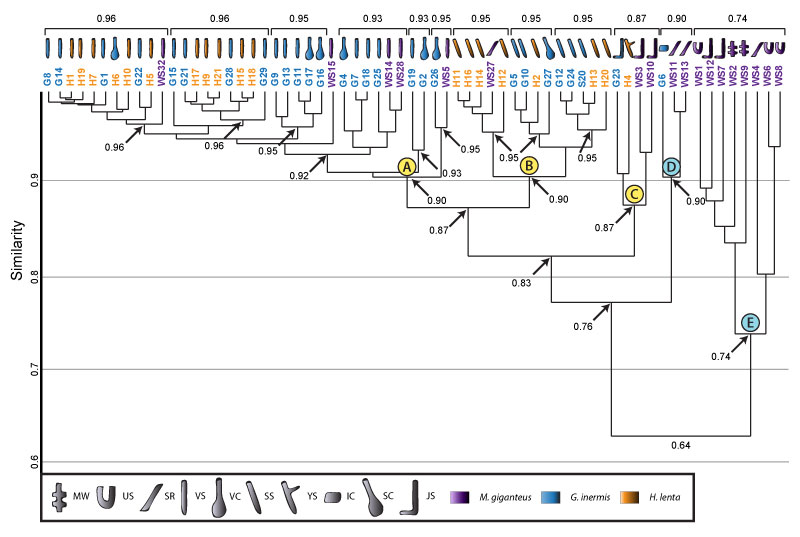 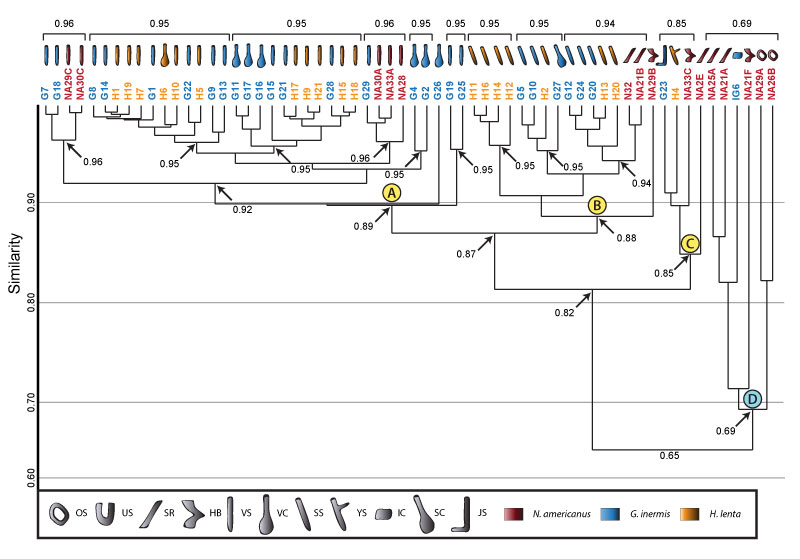 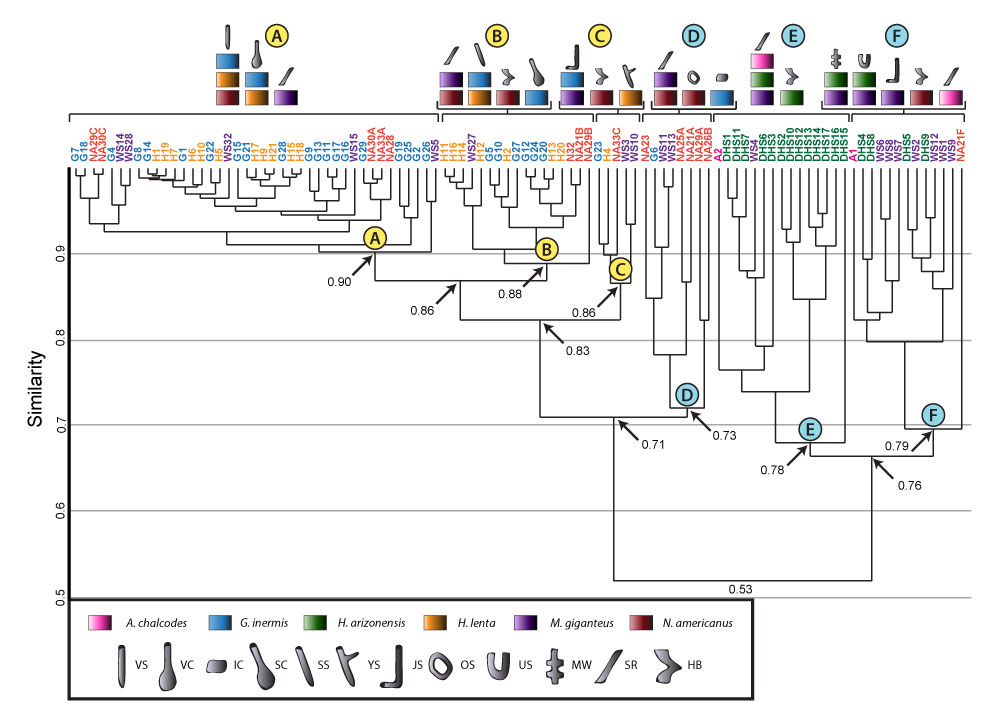