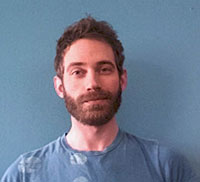 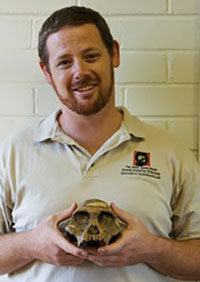 Dr. Andrew I.R. Herries obtained his Ph.D. at the University of Liverpool Geomagnetism Laboratory and Dept. Archaeology in 2003 working on a magnetostratigraphy of South African early hominin palaeocaves. He remains an Honorary Research Fellow of the Geomagnetism Laboratory at Liverpool through the School of Environmental Sciences. He has worked in South Africa since 1997 and has a wide ranging background in the excavation of palaeolithic and fossil bearing caves, palaeoanthropology, geoarchaeology, speleology, geochronology, karst geology, archaeological geophysics, & archaeomagentism (inc. Palaeomagnetism, Mineral [Rock] Magnetism & Environmental Magnetism). He is the head of the Australian Archaeomagnetism Laboratory (TAAL) and an Associate Professor and ARC Future Fellow in the Geochronology of Human and Marsupial Evolution in the Dept. Archaeology, Environment and Community Planning at La Trobe University. 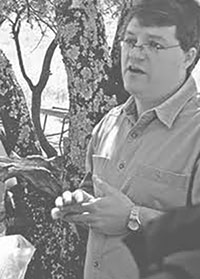 Dr. Colin G. Menter received his Ph.D. from the University of the Witwatersrand and currently is director and project leader of the Drimolen hominin site through the Centre for Anthropological Research at the University of Johannesburg. His research focuses on the palaeobiology of hominins and the site-based significance of the Drimolen deposits for understanding the early Pleistocene landscape of the Cradle of Humankind UNESCO World Heritage Site. 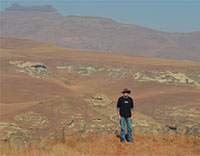 Dr. Justin W. Adams received his Ph.D. in physical anthropology from Washington University in St. Louis in 2006. His research focus is on the evolution of African mammals in southern Africa and the paleoecology and taphonomy of the South African primate-bearing cave deposits. He has excavated and described mammalian assemblages from several Pliocene and Pleistocene fossil localities including Gondolin, Luleche, and Hoogland. He is currently a Senior Lecturer in the Department of Anatomy and Developmental Biology at Monash University.