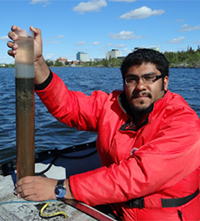 Nawaf Nasser is carrying out Ph.D. research under the supervision of Dr. Tim Patterson in the Department of Earth Science, Carleton University in Ottawa, Ontario, Canada. His research focuses on utilizing various proxies (e.g. micropaleontological, geochemical and sedimentological) to assess the impact of environmental contamination and success of remediation efforts in northern lakes. Nasser has a B.Sc. in Geology (with marine science minor) from Kuwait University, and recently completed his M.Sc. in Earth Sciences at Carleton University, where he investigated the spatial response of arcellaceans, a group of shelled benthic protists, to mining related contamination in lakes in the area of Yellowknife, Northwest Territories, Canada. 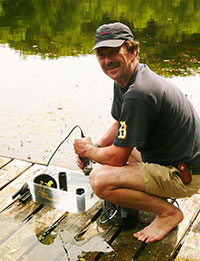 Dr. Tim Patterson is Professor of Geology at Carleton University in Ottawa, Ontario, Canada. As a child he was infatuated with dinosaurs, assorted other extinct beasts and ancient hominids, which continued into university. After meeting professors Franco Medioli and David B. Scott of Dalhousie University he was convinced to go small. Subsequent to micropaleontologic research on freshwater thecamoebian paleoecology at Dalhousie, he was trained in foraminiferal systematics at UCLA by professors Alfred R. Loeblich Jr. and Helen Tappan. For the next 20 years he primarily specialized in paleosealevel, paleoclimate, and paleoecologic studies using foraminifera. Then one day he looked at a map and realized that Ottawa is nowhere near an ocean, unless one counts the Great Lakes. So he has returned to his thecamoebian roots. His current research interests include the use of thecamoebians as indicators of nutrient loading and metal contamination. With the help of a freeze core microtome he also carries out time series analysis at near annual resolution on thecamoebian assemblages to detect the influence of cyclic ocean-atmosphere climate drivers on limnologic hydroecology.