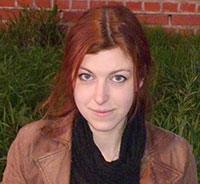 Marie K. Hörnig is a PhD student in the work group of Steffen Harzsch at the University of Greifswald, but is also associated with the Palaeo-Evo-Devo group of Carolin and Joachim T. Haug at the LMU Munich. During her Diploma thesis in Greifswald, she worked on the evolution of ontogenesis and the deep-time aspects of social and brood care behaviour of Dictyoptera, as well as the origin of the different morphotypes within this insect group. In the context of her PhD studies she broadens this approach and investigates the evolution of reproductive strategies of fossil insects in general. A further focus of her are imaging methods, especially for amber. These methods comprises, e.g. light microscopy and composite macrophotography under polarised light, stereo photography, micro-computed tomography, and virtual surface reconstructions.

Andy Sombke studied zoology, entomology and ecology at the University of Rostock (Germany). After two years of lecturing in entomology at the Zoological Institute in Rostock, he started a PhD in the group of Bill S. Hansson at the Department of Evolutionary Neuroethology at the Max Planck Institute for Chemical Ecology in Jena (Germany) working on the olfactory system in centipedes (Myriapoda). He moved to the University of Greifswald (Germany) to finish his PhD in the group of Steffen Harzsch. Since 2011 he is an academic assistant in the workgroup 'Cytology and evolutionary biology' at Greifswald University focussing on the sensory and nervous system of arthropods with a special interest in myriapods. In a set of experiments with different myriapod species he analyzes the morphology of the antennae and the central olfactory pathway with scanning electron microscopy, serial semithin sectioning combined with 3D reconstruction, antennal backfilling with neuronal tracers, immunofluorescence combined with confocal laser-scan microscopy as well as X-ray microscopy. 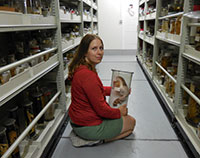 Carolin Haug studied biology at the Julius-Maximilians-Universität Würzburg with animal ecology as major subject and sociobiology and palaeontology as minor subjects. She received her Diplom in 2005 and moved to the University of Ulm for her Ph.D. thesis. In the work group Biosystematic Documentation she investigated the ontogeny and evolution of the arthropod head shield on a wide spectrum of fossil and extant specimens. Due to the very different demands of the material, she developed new imaging techniques or modified existing methods together with her collaborators, for example, composite imaging, stereo photography or autofluorescence macro- and microscopy. In 2011, Carolin defended her Ph.D. thesis. She was a postdoctoral researcher at Yale University and at the Ernst-Moritz-Arndt-Universität Greifswald. Besides optimising imaging techniques, she is interested in fossilised development (see also http://www.palaeo-evo-devo.info) and in the evolution of tagmosis. For this purpose, she investigates mainly arthropods from different deposits yielding exceptional preservation, such as Rhynie chert, Solnhofen Lithographic Limestones, the 'Orsten', Burgess Shale, or Mazon Creek, always in comparison to their extant relatives. Carolin moved to Munich in 2013 to continue her research there at the Ludwig-Maximilians-Universität. 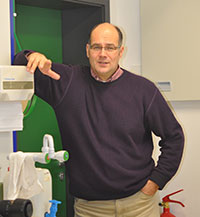 Steffen Harzsch obtained his PhD in 1995 from the University of Bielefeld (Germany) working on the ontogeny of the nervous system in decapod crustaceans. As a PostDoc he analysed aspects of the embryonic development of the lobster nervous system in the lab of Barbara Beltz at Wellesley College (USA, Massachusetts). He then moved to the University of Ulm (Germany) where, sandwiched between the palaeontologist Dieter Waloszek and the neurobiologist Harald Wolf as tutors, he began with comparative analyses of arthropod nervous systems to contribute new arguments to the ongoing debate on arthropod phylogeny. There, he coined the term "neurophylogeny" as a synthesis of neuroanatomical analyses against an evolutionary background. In 2006, he joined Bill S. Hansson's group "Evolutionary Neuroethology" at the Max-Planck-Institute for Chemical Ecology in Jena (Germany) as group leader for neuroanatomy. In 2008, he received tenure as Full Professor in Cytology and Evolutionary Biology at the University of Greifswald (Germany). His research focusses on the neuroanatomy and neuroethology of arthropods, mostly crustaceans and myriapods. Methods include immunohistochemistry, classical histology, confocal laser-scan microscopy, 3D reconstruction, and micro computer tomography.

Joachim T. Haug studied animal ecology (major), sociobiology and palaeontology (minors) at the Julius-Maximilians-Universität Würzburg. After the receipt of the Diplom in 2005, he moved to the work group Biosystematic Documentation at the University of Ulm for his PhD thesis. There he worked on the early crustaceans from the Cambrian 'Orsten', which are preserved three-dimensionally and with minute details. To make the entire morphology clearly visible, Joachim produced computer-based 3D models for each developmental stage of a species, resulting in a 4D model of the species. With 4D models reconstructed for the different species, differences in the developmental pattern between the species became visible. These changes in the developmental timing, so-called heterochronic events must have occurred several times during early crustacean evolution. Due to these findings, Joachim got interested in studying such evolutionary changes of development also in fossils from other deposits and focussed on Palaeo-Evo-Devo (see also http://www.palaeo-evo-devo.info). After his defense in 2009 and two further years as postdoctoral researcher in Ulm, he received two Feodor Lynen research fellowships from the Alexander von Humboldt-Foundation, with which he was doing research at Yale University and at the Ernst-Moritz-Arndt-Universität Greifswald. Besides 3D modelling, Joachim is also interested in different methods of imaging (documentation and presentation). In September 2013, he relocated to the Ludwig-Maximilians-Universität in Munich.