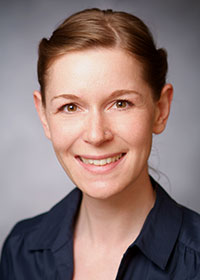 Frauke Stebner is a PhD student in the working group of Jest Rust at the Steinmann Institute, University of Bonn. She is a biologist with interests in (palaeo)entomology, amber research, and palaeoecology/ palaeobiogeography of Diptera. 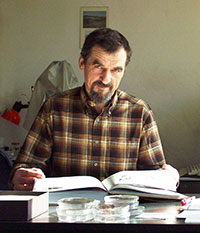 Ryszard Szadziewski received his M.Sc. from University of Nicolaus Copernicus in Toruń, defended his Ph.D. in 1979 at the Institute of Zoology, Polish Academy of Sciences in Warsaw, and habilitation dissertation defended in 1987 at Adam Mickiewicz University in Poznań. In 1978 commenced his research and teaching work at the Department of Invertebrate Zoology and Parasitology at the University of Gdańsk, since 1991 he has been head of this department. During his research he drew attention to a relatively little known family of flies – the biting midges, Ceratopogonidae. He became a world-famous specialist and taxonomist in both the recent as well as the fossil flies of this family. It was his idea to found the laboratory "Museum of Amber Inclusions" at the Department, to which he donated his collection of amber inclusions. He is involved in the promotion of knowledge about amber, its importance in discovering fossil flora and fauna, as well as the idea of Gdańsk as the World Capital of Amber. He is a member of the International Amber Association, Arbeitskreis Bernstein, the International Palaeoentomological Society, the Amber Museum Council, as well as the World Amber Council, whose president he has been since 2008. 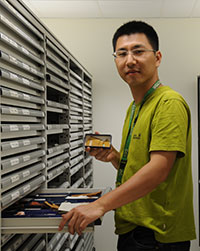