FIGURE 1. Cephalon of Cryptolithus tesselatus (AMNH FI-101479) showing morphological terms used in this paper, following Whittington (1968) and Hughes et al. (1975). Concentric arcs are labeled according to their placement relative to the girder (expressed on the ventral side): E = external; I = internal. “Fringe-pits” are circled in yellow; the “F-pits” represent a subset of these interior to the labeled concentric arcs. Specimen is 6.6 mm long. 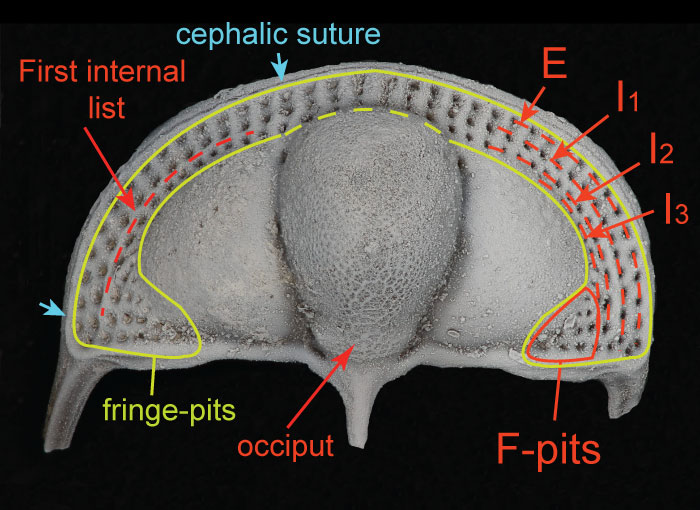 FIGURE 2. Different views of 3D surface model rendering of Cryptolithus tesselatus showing placement of fixed landmarks. All landmarks are indicated at least once, with the exception of 11 (paired with 12). Unpaired landmarks = 17-20; paired landmarks = 1-16, 21-23, 42; semi-landmarks along first internal list shown by dashed line and represented by landmarks 24-41. See Appendix 2 for full description of all landmarks. Surface reconstruction is of AMNH FI-101479. 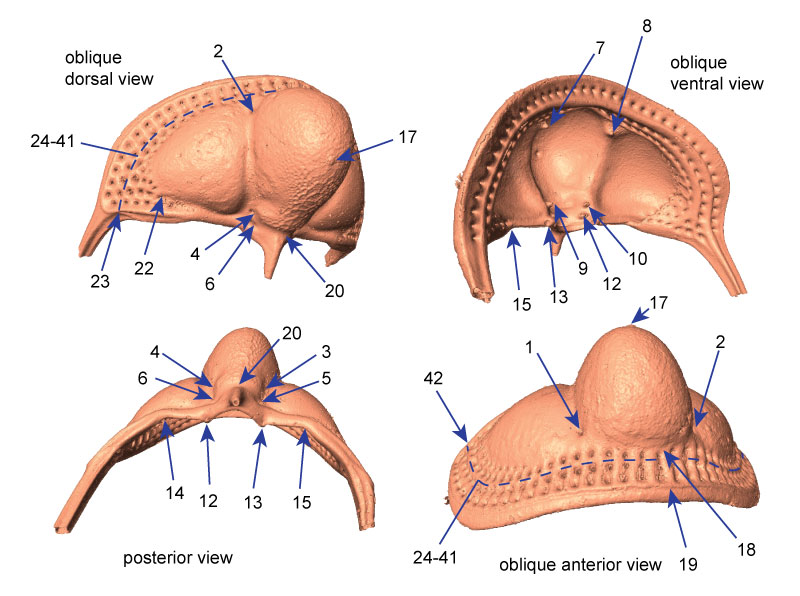 FIGURE 3. Placement of points defining patch on glabella. Points in red are redundant to fixed landmarks as described in the text and Appendix 2. After the surface landmarks were extracted using Landmark Editor, the redundant landmarks were removed from the final data file. Specimen shown is AMNH FI-101482; specimen is 7.1 mm long. 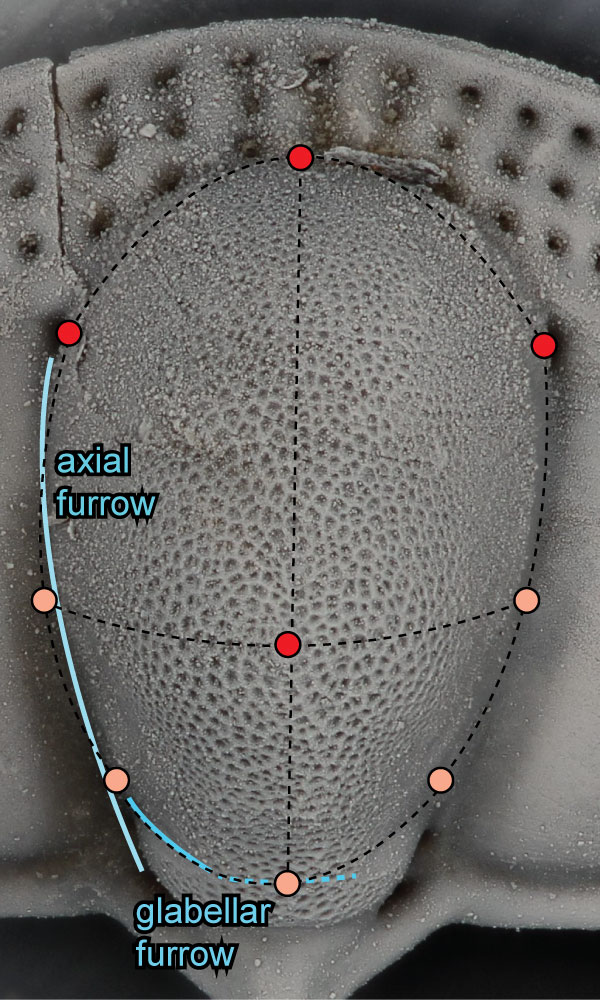 FIGURE 4. Slice through volume rendering of Cryptolithus tesselatus (AMNH FI-101479), shown in dorsal view in inset. Red line in inset shows the orientation of the slice across the specimen. Bright white area is sediment trapped within the bilaminar structure of the cephalon. Blue arrows point to suture between upper and lower lamellae; red arrows point to fringe-pits. 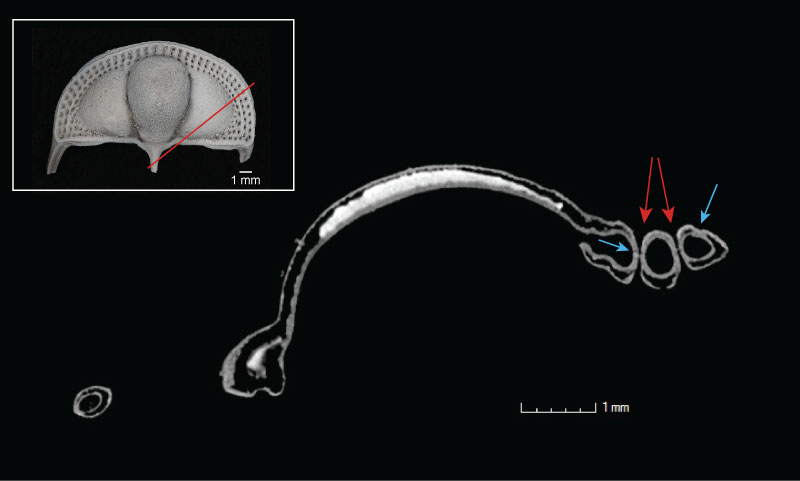 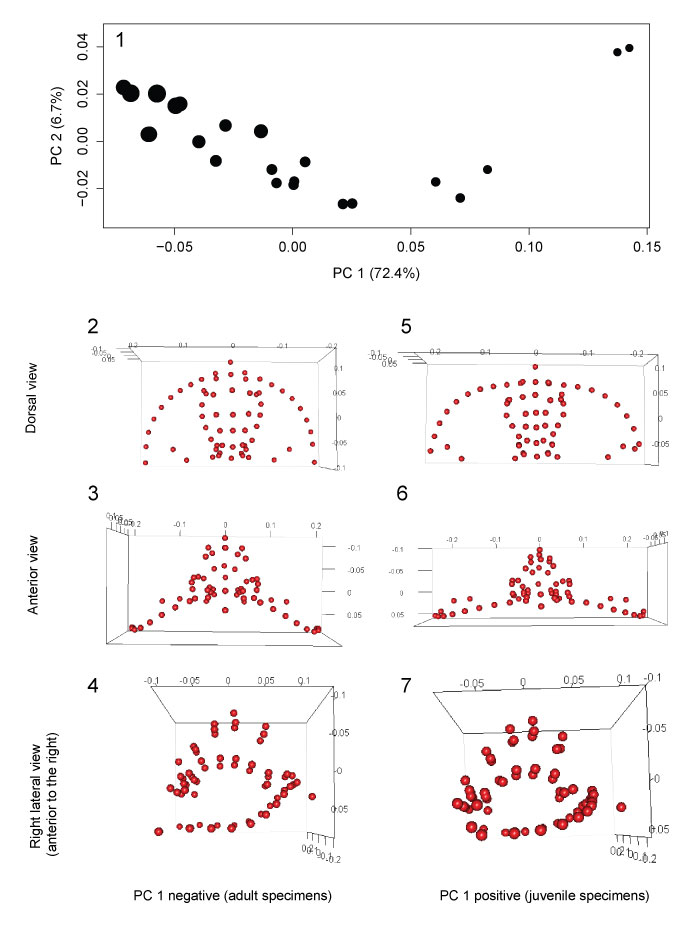 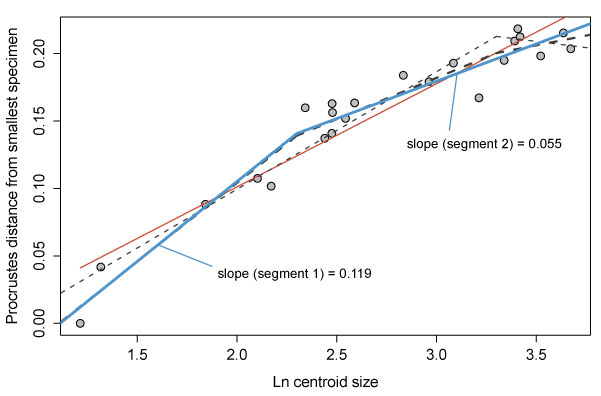 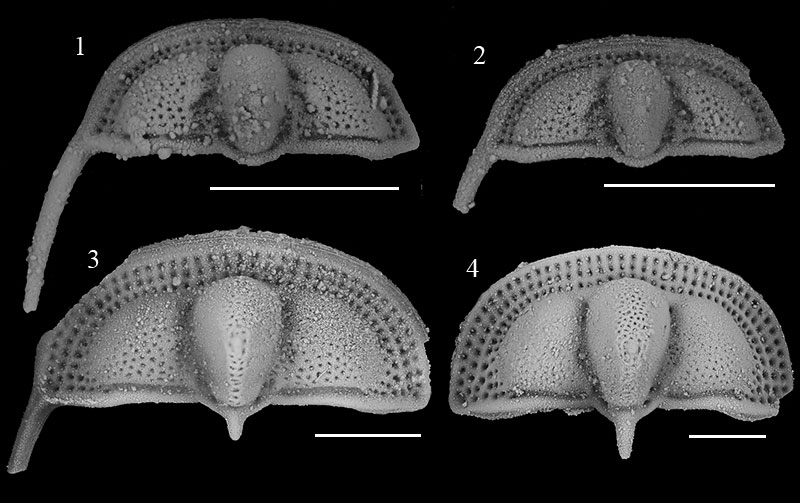 FIGURE 8. Length vs width of Cryptolithus tesselatus cephala, coded for the number of concentric arcs of fringe-pits expressed in each specimen. The first three concentric arcs (E, I1, and I2) are complete when first expressed. Based on clustering, I3 is likely completed over three molts, first by only 1-3 fringe-pits, then 8-10 fringe-pits, then 13-15 fringe-pits with the anteriormost in line with the 10th radial rows of fringe-pits in arcs E-I2. The dataset includes the 23 specimens, which were CT-scanned as well as 31 additional silicified specimens from the collection; specimens that were CT-scanned are outlined in red. Arrows indicate the specimens shown in Figure 1 and Figure 7. Inset in upper right corner is a magnified view of the specimens in the dashed box. The scaling component describing the relationship between length and width is 1.153 (1 = isometric growth). 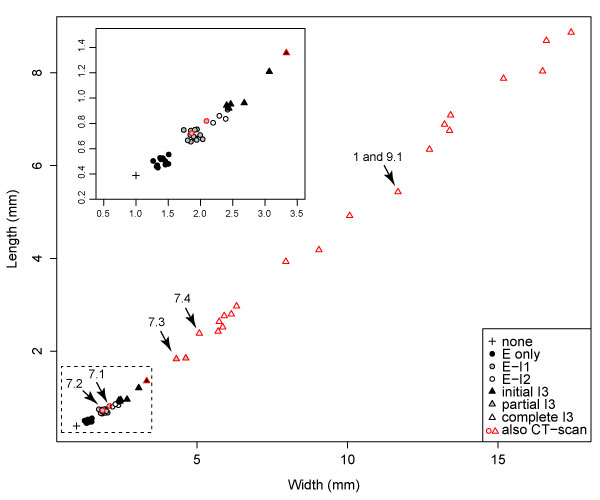 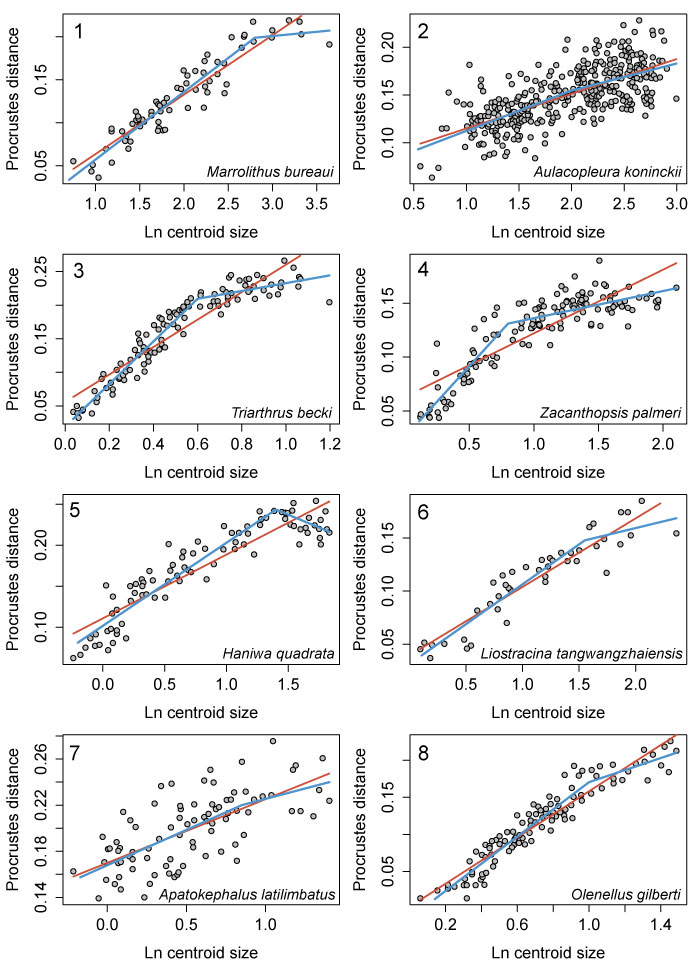