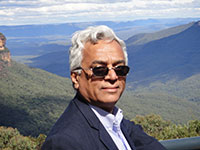 I am a retired Research Scientist and Professor from the Research Institute, King Fahd University of Petroleum Exploration (KFUPM), Dhahran in Saudi Arabia. In 2014-2015, I worked as a Senior Palynologist with the Sirte Oil Company of Libya. At present I am associated with the Department of Earth Science, Carleton University, Ottawa, Canada.

I completed my first Ph.D. degree in Stratigraphic Palynology in 1976 at Michigan State University, USA and a second one in 1999 in Environmental Micropaleontology from Carleton University, Ottawa, Canada. Earlier I did my B.Sc. and M.Sc. degrees in Geology from Lucknow University, India. I was a Nuffield Foundation research fellow at Sheffield University in 1980-81 and a Matsumae Foundation research fellow at Nagasaki University in 1989. During the past forty years I taught at several universities and worked with oil companies as a geologist and biostratigrapher in different parts of the world.

My areas of research interest include palynology and biostratigraphy in basin exploration and benthic foraminifers and thecamoebians as proxies for environmental, oceanographic and climate change during the past 15,000 years. I have published in these fields of science and during the past few years I also published in the field of natural hazards of the Arabian Peninsula.