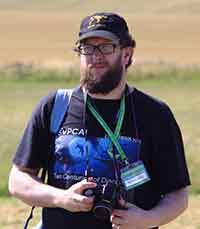 Darren is a researcher, author, editor and consultant based in Southampton, UK. He received his PhD at the University of Portsmouth following his work on Early Cretaceous theropod dinosaurs, in particular the tyrannosauroid Eotyrannus. His main areas of research interest include azhdarchoid pterosaurs, parvipelvian ichthyosaurs and the dinosaurs of the Lower Cretaceous Wealden Supergroup.