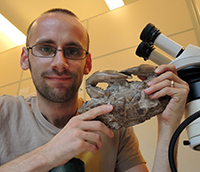 Matúš Hyžný received his PhD from Comenius University in Bratislava (Slovakia) in 2012; his doctoral thesis was titled "Malacostracan associations of the Central Paratethys – systematics, taphonomy, palaeovology and palaeobiogeography". In 2013–2015 he was a research associate at the Natural History Museum in Vienna (Austria) where he studied the Cenozoic biogeography of Western Tethys decapod crustaceans. His interests cover the systematics, fossil record and biogeography of decapods with a special reference to axiidean ghost shrimps. However, he feels at home with any group of malacostracan crustaceans including mantis shrimps and isopods. 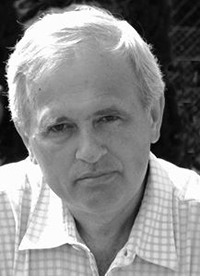 Arpád Dávid received his PhD in Earth Sciences at Debrecen University, Debrecen (Hungary). His main field of study is bioerosion. In his PhD thesis he compared the occurrence and distribution of bioerosion structures on and in the tests of Late Oligocene molluscs of six localities in Hungary. He also studies the bioerosion structures of Paleogene and Neogene rocky shores of the Bükk Mountains (Hungary) focusing on the activity of Clionaidae sponges. In the recent years he began to examine the bioturbation structures of some Hungarian Palaeozoic and Miocene formations and modern life traces of the animals of lacustrine environments.