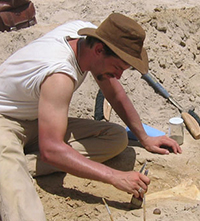 Stéphane Jouve is the curator of the palaeontological collections of the Sorbonne University (Paris, France), and an associate researcher of the Muséum National d'Histoire Naturelle of Paris, France. His research activities focus on the anatomy, systematics, palaeobiogeography, and evolution of the crocodylomorphs. 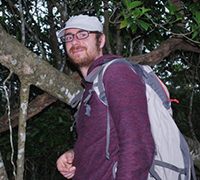 Bastien Mennecart mainly works on mammal anatomy and evolution, but his broad interest cover the entire vertebrate palaeontology. Since 2005, he contributes to and organizes field work around the world. He got his PhD at the University of Fribourg (Switzerland) in 2012 on phylogeny and evolution of ruminants. As postdoc at the Natural History Museum in Paris and Munich, he studied the connections between Asia and Europe during the Cainozoic. Since 2015, he works on a project to define the phylogeny of the extent and extinct ruminant based on 3D models of the inner ear region. 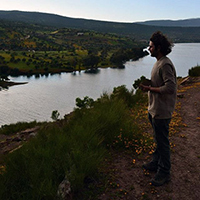 Julien Douteau is an autodidact palaeontologist. He is currently working in a private company as fossil preparator. He is collaborating in many palaeontological projects including vertebrate fossils from Carboniferous to Miocene. Since 2005, he contributes to and organizes field work around the world, mainly in France, USA, and Morocco. 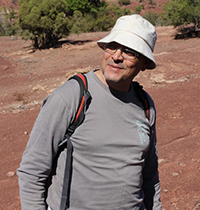 Nour-Eddine JALIL is a Professor at the National Museum of Natural History. He began his career as a lecturer-researcher at the Faculty of Sciences Semlalia and then moved to the MNHN where he is a curator of vertebrate fossils. He has a broad interest in vertebrate paleontology but his interest focuses on the Permo-Triassic fauna and their depositional environments including early synapsids and reptiles.