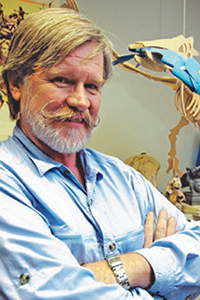 Dan Chure has been a dinosaur fanatic since seeing his first dinosaur movie at the age of three and the dinosaur halls at the American Museum of Natural History when he was five. Serving as the paleontologist at Dinosaur National Monument since 1979 his research interests include the phylogeny and paleoecology of Mesozoic tetrapods and terrestrial ecosystems, preservation and conservation of in-situ fossil exhibits, and fossil resource protection. Current research efforts are focusing on the paleontology and paleoenvironments of the Nugget Sandstone and the Digital Quarry Project, an interactive website covering the immense history, excavations, and research at the great Carnegie Quarry at Dinosaur.