Marco Romano received his PhD in Earth Science (vertebrate paleontology) from the Sapienza, University of Rome Italy, working on the phylogeny of basal synapsids (Family Caseidae, Casesauria, Synapsida). From 2012 he is Research Associate in Vertebrate Paleontology at the Sam Noble Museum (Norman, Oklahoma). From 2015 is a post-doc researcher in vertebrate paleontology in the framework of the Sofja Kovalevskaja-Project "Early Evolution and Diversification of Synapsida" of the German Federal Ministry of Education and Research from the Alexander von Humboldt-Foundation at the Museum für Naturkunde, Leibniz-Institut für Evolutions- und Biodiversitätsforschung. He has a very broad research interest in evolutionary biology and vertebrate paleontology, combining several modern and quantitative approaches (osteology, functional morphology, morphometry, ichnology, biomechanics, ethology, myology, "in vivo" restoration and body mass estimate) in order to obtain a better, and as much as possible multidisciplinary and holistic knowledge of some key points in the evolution of terrestrial tetrapods. He also conduct research in philosophy and history of science (especially in the early development of paleontology and geology) analyzing the onset, and evolution in time, of fundamental concepts for Earth Sciences. In this framework is an active member of the "Geoitaliani Project", a section of the Italian Geological Society whose mission is to analyze and disseminate the great contribution of Italian scientists to the early advancement of knowledge in geology and paleontology. 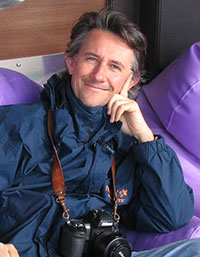 Ausonio Ronchi works as associate professor in Stratigraphy at the Dipartimento di Scienze della Terra e dell'Ambiente, Università di Pavia. He graduated at the Università degli Studi di Milano and obtained his Ph.D. c/o Università degli Studi di Parma; Thesis title: "Stratigraphy and basin reconstruction of the Escalaplano and Perdasdefogu Permian basins, SE Sardinia, Italy". His primary research interests lie in the areas of stratigraphy and siliciclastic sedimentology, facies and basin analysis onto the Permo-Carboniferous to Early Triassic continental sequences of Sardinia, the Southern Alps, Bulgaria, Southern France, Spain and Cretaceous to Pleistocene of Patagonia Argentina (Neuquén Basin). Terrestrial biostratigraphy and palaeogeographic reconstructions are also among his fields of interest.
During the years he analyzed different intramontane basins with fluvial-alluvial depositional facies. From a detailed analysis of the single succession he moved to an interregional correlation between areas currently separated, aiming at the reconstruction of the paleogeography at the W Mediterranean sector scale up to inner Europe areas in the late Paleozoic to early Mesozoic interval.
He is Voting Member in the IUGS Subcommission on Permian Stratigraphy (SPS) and is author or co-author of several peer-reviewed papers or contributions in volumes, geological maps, guide-books. https://www.researchgate.net/profile/Ausonio_Ronchi 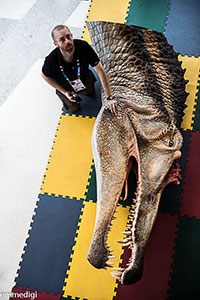 Simone Maganuco is a vertebrate paleontologist who has collaborated with the Museo di Storia Naturale di Milano (Italy) since 2003. He has studied fossils of several Mesozoic vertebrates from Madagascar and Africa, including stereospondyl amphibians and the enigmatic giant predator Spinosaurus, as well as the Italian baby dinosaur Scipionyx. As a collaborator with GeoModel and member of "Prehistoric Minds", Maganuco designs and supervises the making of hyper-realistic models of dinosaurs and prehistoric animals, as well as temporary and permanent exhibitions. He is the creator and curator of the travelling exhibition "Dinosauri in Carne e Ossa / Dinosaurs in the Flesh". 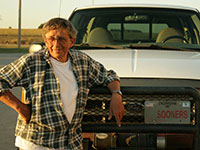 Umberto Nicosia works as professor of Paleontology at the Department of Earth Sciences and he was the Director of the Paleontological Museum of the Sapienza Università di Roma and of the Earth Sciences Department. His scientific activity covers several fields of Mesozoic geology and paleontology. Since 1975 he has been studying Jurassic successions in Italy, Albania, Turkey, England, Germany and France. Its main research field concerns systematics and palaeobiogeography of dinosaurs and of Paleozoic and Mesozoic tetrapod footprints. He is also especially interested in evolution of articulate crinoids. The number of his publications in these topics exceeds 70.