Terms, definition, and usage of pneutmatic morphology and histology used in this analysis.

Acamerate - Pneumatic structures limited to fossae. Fossae do not significantly invade the centrum.

Procamerate - Deep fossae penetrate to median septum, but are not enclosed by osteal margins.

Annuli - Translucent to opaque bands, thicker than LAGs, represent a slowing (but not a cessation) of osteogenesis.

Haversian Bone - Bone that is completely remodeled by secondary osteons.

Longitudinal Vascular Canal - Canals oriented parallel to the long axis on the bone.

The material contained herein serves to address some of the comments and questions raised by Wedel and Taylor (2013), along with some minor discussion on non-Apatosaurus and Diplodocus genera.

The claim that no North American diplodocids possessed bifurcated neural spines farther anteriorly than C6 is now shown to be incorrect. Through examination of several complete or nearly complete cervical series, we now see that in diplodocids incipient to weak neural spine bifurcation can occur between C3-C5 (Appendix 6). It is interesting to see that in the anterior most cervical vertebrae there is a small span of bifurcation preceded and followed by a lack of bifurcation. If the hypothesis that bifurcation is developed as a means to maintain and sustain horizontal mobility (Woodruff, 2014) is correct, the presence of select anterior-most bifurcation could be indicative of active cranial mobility. As demonstrated by Wedel and Taylor (2013), serial position is critical. If serial position was unknown in these specimens then there would be a valid argument to place these bifurcated anterior cervicals more posteriorly. From the examined specimens it appears that diplodocids (at least North American taxa) could have neural spine bifurcation prior to C6, and that these damaged historic specimens could be reconstructed with such.

The “End” Of Diplodocid Ontogeny. With the information attained from many of these 2/3 sized diplodocids (such as MOR 592 MOR 7029 [both Diplodocus sp.]), it would appear that once a diplodocid reaches roughly 2/3 its maximum length that proportionally (and potentially mechanically) it is more equivalent to the skeletally mature form. Simply applying force per unit area or a Ponderal Index (Thompson, 1942), the gravitational forces acting upon a 15 meter and 27 meter long animal are more similar (approximately 2 times an increase in both body mass and body length) than those acting upon a 2 meter and a 15 meter long animal (approximately 38 times heavier and 7.5 times longer). Once a diplodocid reaches that 2/3 sized threshold it has achieved the skeletal adaptations needed to support the large vertebral column (i.e., bifurcation of the neural spines). From the 2/3 size through the remainder of its life, the animal then modifies the existing structure to deal with the increasing stresses enacted upon it. This explains why the spine bifurcation changes are less dramatic, and why the centrum begins to expand along with other proportional changes. At the point of dramatic weight increase, it is far easier to modify a pre-existing structure than to suddenly develop a new feature. It would appear that from hatching, an immature diplodocid is in a dramatic ontogenetic race to develop the skeletal features needed to support its eventual gigantic girth.

Woodruff and Fowler (2012) Clarification. In the discussion section Woodruff and Fowler (2012) say, “Just as particularly large diplodocid specimens... have been more recently recognized as large and potentially older individuals of already recognized taxa,... taxa defined on small specimens... might represent immature forms of Diplodocus or Apatosaurus.” Clarifying the original phrasing, the meaning of this passage is that ontogenetic and statigraphic analysis of the characters that diagnose particular taxa within Dipodocoidea (particularly those described based on immature holotypes) may significantly alter the structure of the phylogenetic tree. Further, isolated specimens currently attributed to a given taxon may instead turn out to be ontogenetic stages of a different taxon (without sinking the original designated taxon), these mis-assignments due to heterochronic shifts are only recognizable with stratigraphic and ontogenetic analysis.

Barosaurus. One possible contentious specimen to the ongoing discussion of ontogenetic development of neural spine bifurcation is the immature Barosaurus sp. (DINO 2921) described by Melstrom et al. (2016). While documenting numerous important ontogenetic vertebral characters (ranging from Elongation Index, neurocentral fusion, to pneumatic architecture; and thus further verification of the allometric development of the sauropod skeleton), Melstrom et al. (2016) claim that the morphology of the spine bifurcation in this ~1/3 adult sized individual is indistinguishable from that of a mature animal. The precise spinal morphologies and details are hopefully forthcoming (and respectfully such is not demonstrated nor documented in Melstrom et al. [2016]), but perhaps the specimen DINO 2921 could falsify the hypothesis of Woodruff and Fowler (2012).

Yet we would propose that if Melstrom et al. (2016) are indeed correct about the spine morphology of DINO 2921, this could be an incredibly important key to understanding sauropod evolution within the Morrison Formation. If the stratigraphic resolution is correct (see the informative works of K. Truillo), then DINO 2921 comes from the lower portion of the Brushy Basin Member (Turner and Peterson, 1999; Carpenter, 2013), while other immature Barosaurus specimens (such as AMNH 7530 and 7535; note Tschopp et al. [2015] identify AMNH 7530 as Kaatedocus) are non-bifurcated and come from the upper portion of the Salt Wash Member (Turner and Peterson, 1999; Michelis, 2004; Tschopp and Mateus, 2013). If this resolution, taxonomy, and morphology is correct, then this has substantial implications for Barosaurus heterochrony. Again, all of this hinges on the correct initial identification, but if so, this means that Lower and Upper Morrison specimens have differing vertebral biomechanics (i.e., distinct differing morphologies), and given the stratigraphic and calculated temporal range, this may be initial grounds to begin the examination and inquire into heterochrony, and therefore the possibility of two Morrison Barosaurus taxa.

Camarasaurus. A minor point we would like to bring to light is the recognition of neural spine bifurcation within the basal macronarian Camarasaurus. Woodruff and Fowler (2012) note that in specimens from the Kenton Quarry, the neural spines of immature Camarasaurus sp. are morphologically similar to immature diplodocids in that the neural spines are short and non-bifurcated. No in depth examination on Camarasaurus sp. was carried out in the preliminary analysis (but is currently underway by DCW), but the possibility of Camarasaurus spine ontogeny was favored by Wedel and Taylor (2013). While display features can be modified throughout ontogeny (i.e., male peacock plumage and cassowary and helmeted guinea fowl casques), it would seem unusual that a biomechanical feature could be ontogenetic in one clade, yet static in a closely related clade. In examination of the cervical and dorsal series from the presumed immature Camarasaurus lentus (CM 11338), the neural spines are bifurcated, but the depth of bifurcation is shallow and the neural spine apices are much closer together than in a fully mature animal. A relatively small Camarasaurus sp. specimen at the Great Plains Dinosaur Museum (GPDM 220) has cervical and dorsal neural spines that likewise exhibit shallow bifurcation and narrow neural spines (Woodruff and Foster, 2017). These features alone have been previously thought to be valid autapomorphies of a new genus (N. Murphy and K. Carpenter, personal commun., 2012). However, analysis by Woodruff and Foster (2017) has contrarily demonstrated that GPDM 220 is a maturationally old, small statured individual. Thus GPDM 220 would further verify the complex relationship between vertebral mechanics and ontogeny within sauropods (Woodruff and Foster, 2017).

Haplocanthosaurus. Wedel and Taylor (2013) perform a laudable job verifying that the genus Haplocanthosaurus is not a juvenile Apatosaurus or Diplodocus (the specific lines of reasoning will not be addressed here but we recommend referral to their text; Wedel and Taylor [2013] p. 23-27). Being one of the rarest of Morrison taxa, Haplocanthosaurus is known from three species: H. delfsi, H. priscus, and “H. utterbacki”. Collected from the lower Brushy Basin Member of the Morrison Formation, CM 572 (H. priscus) and CM 879 (“H. utterbacki”) both were found meters away from each other in the Marsh-Felch Quarry 1. While CM 879 has not been histologically sampled to assess maturity, the general consensus (largely based on the overall morphology) is that it represents an immature animal (the differences and validity between H. priscus and H. delfsi shall not be addressed here; McIntosh and Williams [1988], Wedel and Taylor [2013]). As Wedel (2009) illustrates, CM 572 exhibits widespread neurocentral synostosis, whereas CM 879 exhibits primarily completely unfused neural arches (remember from the manuscript that vertebral fusion is not conclusively indicative of maturity within dinosaurs). Though very weakly expressed and exceedingly rare, incipient neural spine bifurcation has been observed within some specimens of Haplocanthosaurus (Appendix 7). Neural spine bifurcation is observed in a posterior dorsal of CM 879, and within an anterior dorsal of CM 572. We are well aware of the importance of serial position and the morphological differences between such vertebrae, however due to the rarity of this feature and the relative proximity a comparison shall still be made. In a posterior cervical of CM 879, the bifurcation is formed by a connection of two closely spaced “humps” (reminiscent of bifurcation observed in CM 555). Within an anterior dorsal of CM 572 these “humps” are spaced and the bifurcation trough is a shallow “V”-shape. Based on the spinal morphology, it would appear that, unlike other members of Diplodocidae, Haplocanthosaurus did not biomechanically require neural spine bifurcation. In conjunction with McIntosh and Williams (1988) and Wedel and Taylor (2013), we would consider “H. utterbacki” as a nomen dubium, and further agree that it represents an immature form of H. priscus. In addition to this, the variation between the two specimens would suggest that while incipient, the neural spine bifurcation observed in Haplocanthosaurus may also be ontogenetic. Verification of this point requires further specimens and overlapping material.

In regards to the phylogenetic assignment of Haplocanthosaurus, we would again stress the need for the recognition of ontogenetic stages. In his analysis of Diplodocoidea, J. Whitlock (2011a) shows that the character matrix for Haplocanthosaurus is a combination of several specimens including CM 879 (“H. utterbacki”), CM 572 (H. priscus), and CMNH 10380 (H. delfsi). While these individuals were included to complete otherwise missing characters from other incomplete specimens, the taxonomic uncertainty of Haplocanthosaurus could be due to the fact that the characters states representing it are from a combination of varying ontogenetic stages and potentially separate species (sensu Mannion et al., 2012). 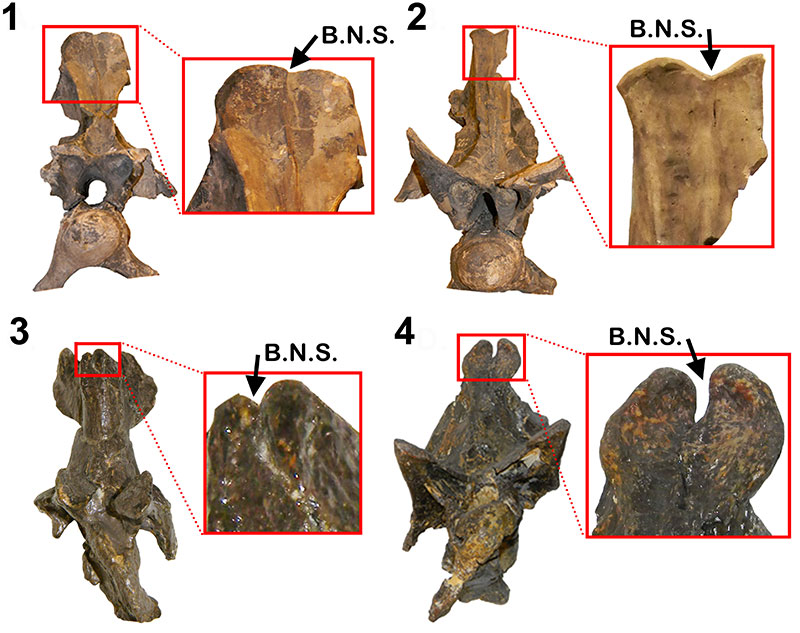