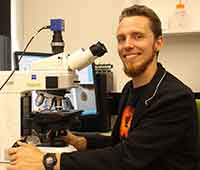 Chris Mays’ research interests have focused on the palaeoenvironments and floral ecosystems of the south polar and sub-polar regions during past greenhouse intervals. From 2012–2017, Chris was undergraduate lecturer and postdoctoral researcher at Monash University’s School of Earth, Atmosphere & Environment. During this time, his research involved the sedimentary successions and both palynological and macrofloral fossils of New Zealand (the Chatham Islands, South Island), Australia (Victoria, Tasmania), and the Antarctic Peninsula. In order to document the fossils from a series of previously unknown localities, he employed a range of emerging imaging and ‘virtual palaeontology’ techniques, such as neutron tomography and synchrotron X-ray tomography. In 2016, he was awarded the inaugural Mary Wade Award by the Australian Association of Palaeontologists (AAP) for the publication of his monograph on the mid-Cretaceous palynology of the Chatham Islands. Most recently, he has undertaken a postdoctoral fellowship at the Naturhistoriska riksmuseet (the Swedish Museum of Natural History), Stockholm, Sweden. This project focuses on the extinction and recovery trends of the terrestrial flora during the end-Permian mass extinction. He is also Associate Editor for Alcheringa: An Australasian Journal of Palaeontology. His work has been supported by the Australian Research Council, the National Science Foundation, the Australian Nuclear Science and Technology Organisation, AAP, Monash University, National Geographic and the Paleontological Society.

Chris received his B.Sc. (Hons) in 2008 from the University of Melbourne, Australia, and his Ph.D. in 2012 from Monash University, Australia.

Joseph is a neutron-scattering scientist at the Australian Centre for Neutron Scattering (ACNS) and manager of the Research Office of the Australian Nuclear Science and Technology Organisation. This incorporates the User Office, Grants Office and Knowledge Centre (Australia's nuclear library) functions. These functions support the user programs of the landmark facilities for Australian science; the OPAL research reactor, Centre for Accelerator Science, ACNS, cyclotron facility and the Australian Synchrotron.

Joseph is an instrument scientist on the DINGO radiography/tomography/imaging station at the OPAL Research Reactor, Deputy President of the International Society for Neutron Radiology and a guest research fellow of the Dinosaur Evolution Research Centre at Jilin University, China. He collaborates with museums and universities to pioneer the use of neutron microCT (3-D imaging of objects using neutrons with micrometre resolution) in the areas of palaeontology, archaeology and cultural heritage. Specific applications are to: 1) digitally excavate and reconstruct fossilised remains; 2) investigate disease and medical practice in ancient time; and 3) determine methods of manufacturing ancient cultural artefacts.

Joseph received his B.Sc. and Ph.D. from the University of Sydney, Australia. 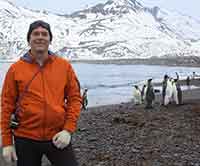 Jeffrey Stilwell’s current research embraces the integration of palaeontological data in 'big picture science', especially the potential to employ applied palaeontology methods in deciphering ancient greenhouse earth systems. He is renowned for his long-term research on ancient polar greenhouse Earth environments and ecosystems, especially in southern latitudes in Antarctica, New Zealand-Chatham Islands and Australia. Professor Stilwell has published >70 peer reviewed articles and five books/monographs in the fields of geology and palaeontology. His research portfolio includes many Australian government grants since 1996 (Australian Research Council [ARC] grants, including APD, ARF, DP, LP, and LIEF schemes; National Geographic Society Committee for Research and Exploration grants (x3); ANSTO awards; Australian Synchrotron award; and many industry grants). Stilwell discovered the first in situ Mesozoic Australian amber in May 2011, as part of a study on Cretaceous-aged sediments in the Otway Basin. This major discovery led to a 2014–17 ARC-DP project on the abundant amber, which in turn, has resulted in comparable deposits with diverse inclusions of animals, plants and microorganisms—many groups of which have no prior fossil record in Australia, and in some instances, the entire Southern Hemisphere. He is currently working with many colleagues from Australia and Europe to learn more about southern Australia’s evolutionary heritage during critical intervals in Earth history from ~230 to 40 million years ago.

Jeff received his B.Sc. and M.Sc. from Purdue University, Indiana, and Ph.D. from the University of Otago, New Zealand.