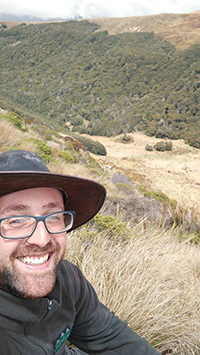 Russell D.C. Bicknell (1991) studied Earth Sciences at the Victoria University of Wellington (New Zealand) from 2009–2014. He earned a Masters degree, first class. He performed a research project on the evolution of the late Neogene planktonic foraminiferal lineage Truncorotalia. In 2016 he accepted a PhD-offer from the University of New England (NSW, Australia), where he currently is studying the evolution of predation during the Cambrian using a suite of fossil groups from across the globe. He is also studying and publishing on aspects of Limulus polyphemus, extinct gnathobase-bearing Euarthropoda, and Ediacaran organisms. Additional research involves finding novel applications of Geometric Morphometric techniques and micro-CT scanning. 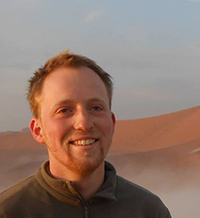 Stephen (Steve) Pates is a PhD student examining predation in the fossil record, with a focus on arthropods from the Cambrian period. This research, on field and museum collections, has been done in collaboration with researchers based in Australia, China, Spain, Switzerland, the UK and the USA. Steve is interested in how healed injuries on prey animals can provide insight into predator-prey dynamics, and help us to understand selective predation pressure in the fossil record. This involves describing novel injury morphologies, analysing the location, frequency and taxon-specificity of injuries in the fossil record, and comparing model population distributions to the fossil record. Steve carries out research on predators to understand the diversity, disparity and functional morphology of these animals. This involves describing new species, placing previously described material in a modern context, creating data-sets and performing computational fluid dynamics and biogeographical analyses. The combination of research on predators and prey provides a more holistic view of predation in the fossil record. 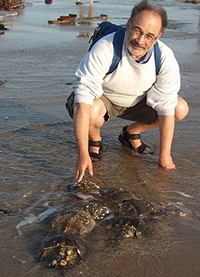 Mark L. Botton (1952) obtained his undergraduate degree from Stony Brook University in 1973, his Masters degree from Brooklyn College in 1976, and his Ph.D. in Zoology from Rutgers University in 1982. His primary area of research has been the biology of Limulus polyphemus, with particular emphasis on trophic interactions, mating behaviour, physiological ecology, and conservation-related issues. He is currently a Professor of Biology at Fordham University in New York City, and the Co-Chairman of the Horseshoe Crab Specialist Group, International Union for the Conservation of Nature (IUCN).