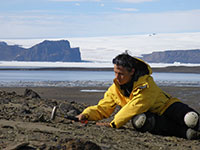 Marta S. Fernández graduated and obtained her PhD from the Universidad Nacional de La Plata (Argentina). She is Professor at the Faculty of Natural Science (Universidad Nacional de La Plata) and a researcher of the Consejo Nacional de Investigaciones Científicas y Técnicas of Argentina working at the Museo de La Plata. Her research focuses on the extinct marine tetrapods, mainly Mesozoic marine reptiles from South America and Antarctica. She has authored approximately 70 research papers and book chapters. She has participated in numerous fieldwork seasons in Argentina and Antarctica. 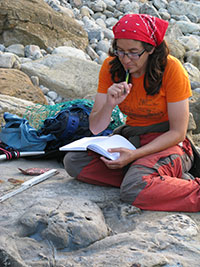 Laura Piñuela is Ph.D. Geologist in the Jurassic Museum of Asturias (N Spain). The research has been mainly focused on Mesozoic reptile footprints (dinosaurs, pterosaurs, crocodiles, turtles and lizards) from several points of view: preservation (taphonomy), locomotion and identification. The author works mainly with the tracks and tracksites of the “Dinosaur Coast of Asturias” (Upper Jurassic).From 2013 she is collaborating in the study of several tracksites in China and Korea. The author is part of the scientific staff in the Jurassic Museum of Asturias (MUJA) since April 2004. 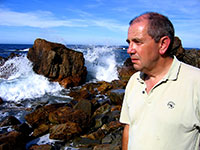 José Carlos García-Ramos is the Director of the Scientific Research in the Jurassic Museum of Asturias (N Spain), since the opening, and was an Associate Professor of Palaeogeography and Basin Analysis in the Department of Geology at University of Oviedo. The author obtained his degree in Geology in 1971 and completed his PhD in 1977. His scientific activity covers several fields of Palaeozoic and Mesozoic geology (mainly Devonian and Jurassic) and palaeoichnology (vertebrates and invertebrates). He has been studying Jurassic successions in Asturias from 1976. Its main research field concerns ichnology of Jurassic dinosaurs and other reptiles. He is also especially interested in sedimentology, palaeoecology and sequence stratigraphy.