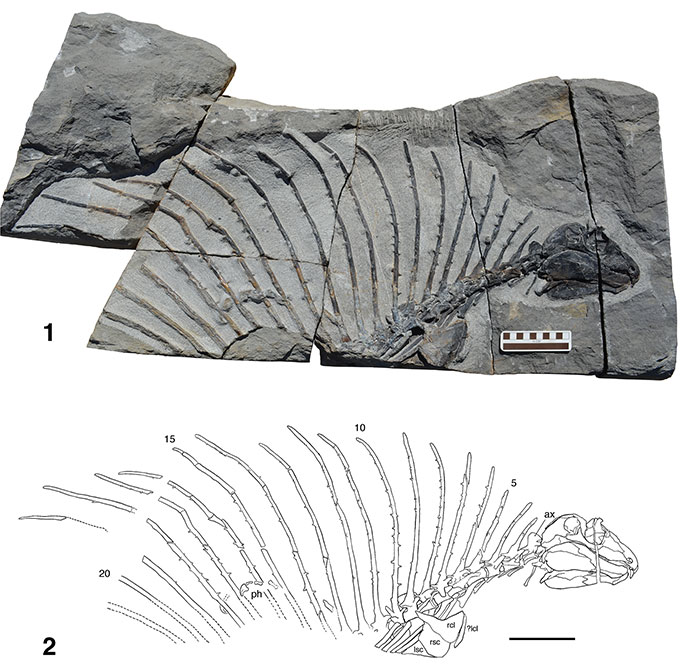 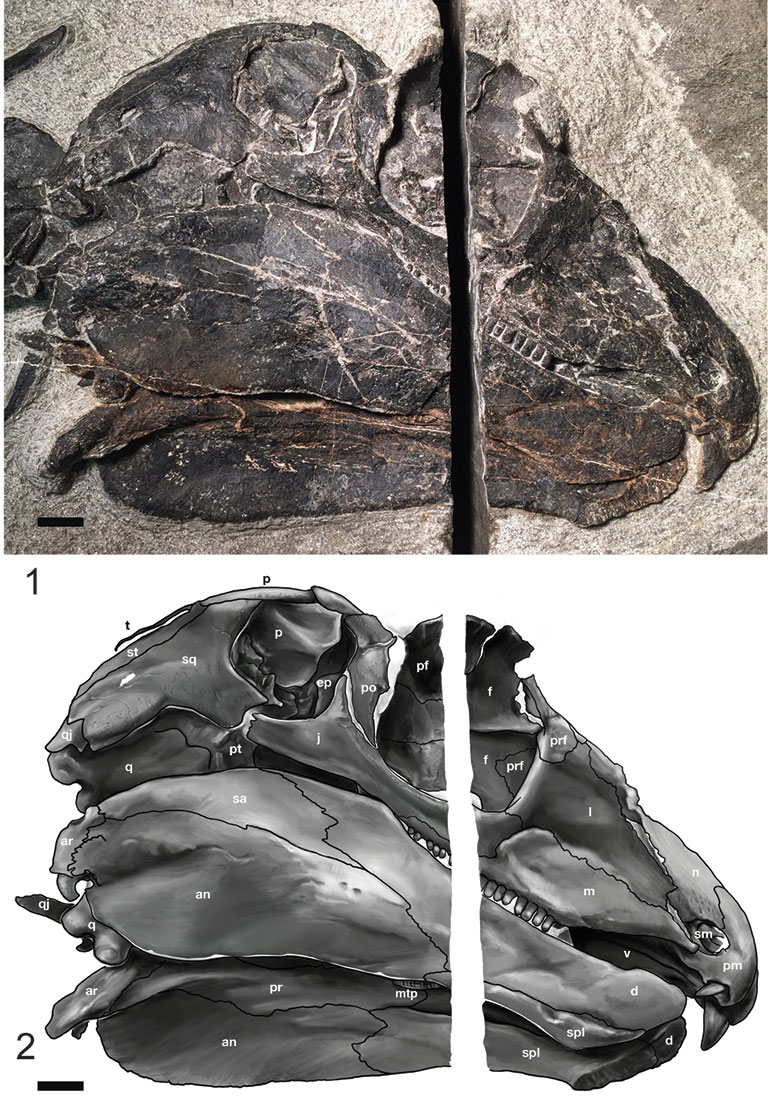 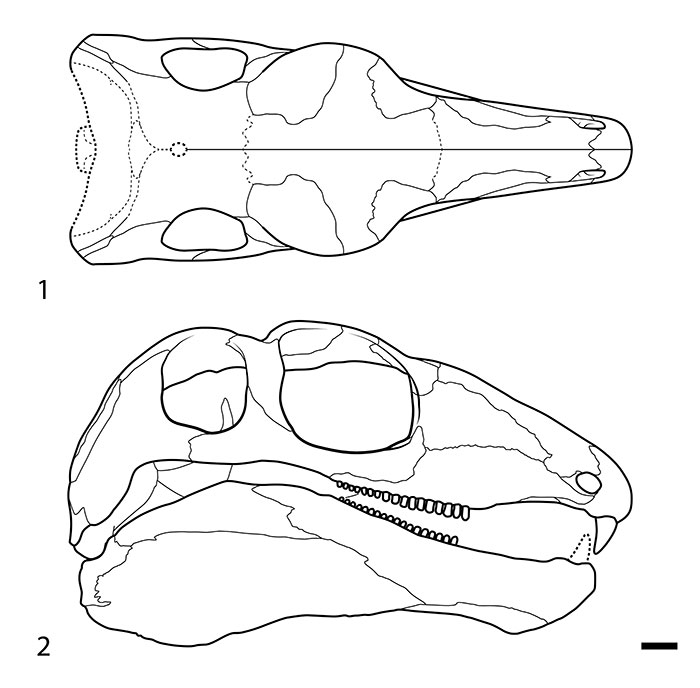 FIGURE 5. Stereophotograph of the snout region of NMMNH P-70796, holotype of Gordodon kraineri. Scale in cm and mm. 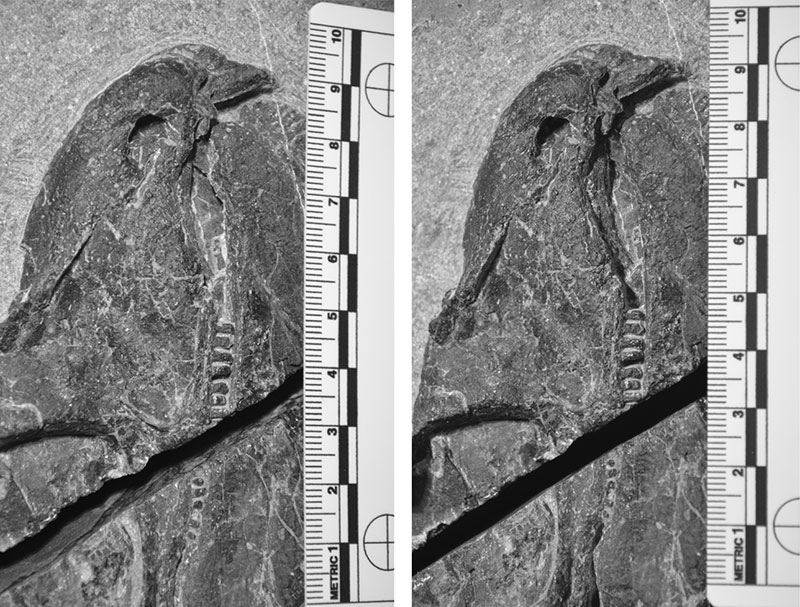 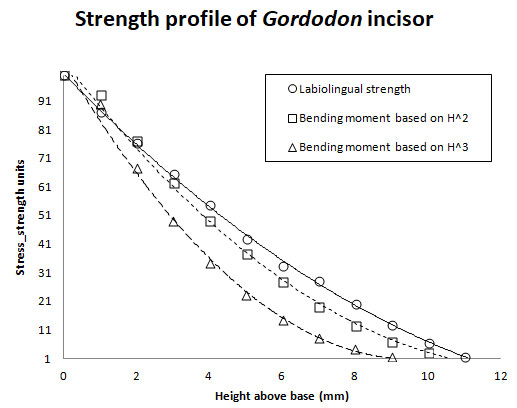 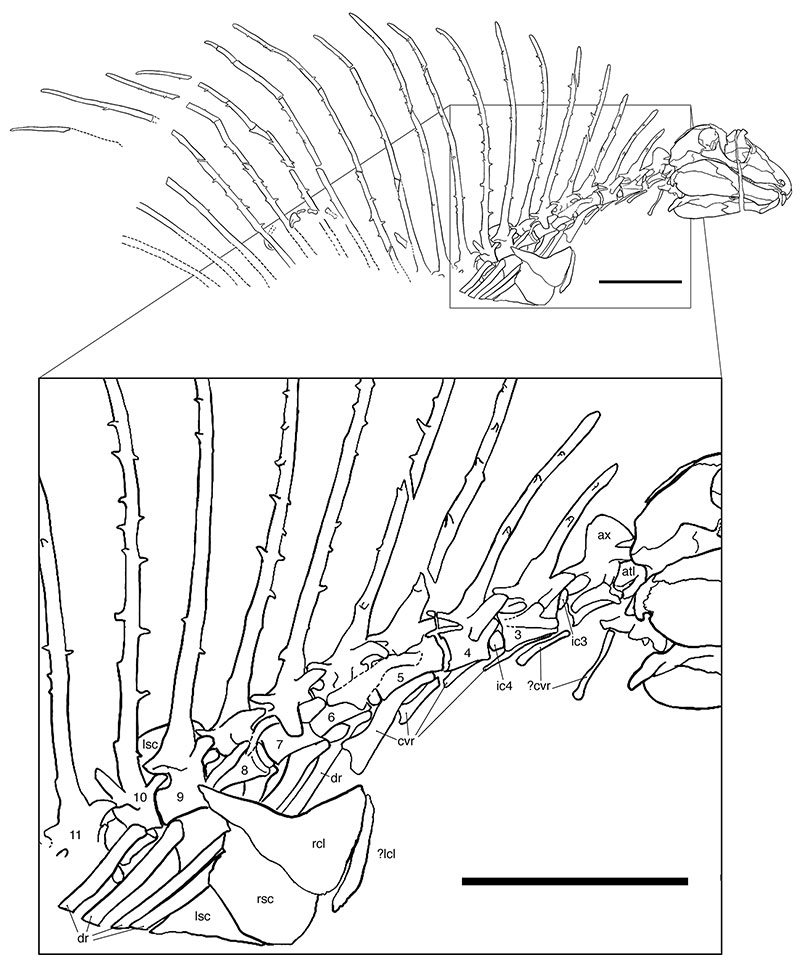 FIGURE 8. Metrics and statistics of the vertebral column as preserved in the holotype of Gordodon kraineri, NMMNH P-70796. 1, Lengths (maximum anteroposterior extent, per Romer and Price, 1940) of the intercentra and centra of vertebrae two through 10, showing monotonic decrease in the length of both elements over the range. 2, Ratio of intercentrum to centrum length (%) decreases from vertebra number two through number 10 as shown by the negative slope of the curve fit, i.e., centrum length decreases at a higher rate than intercentrum length; proceeding posteriorly along the vertebral column the intercentrum becomes relatively longer. 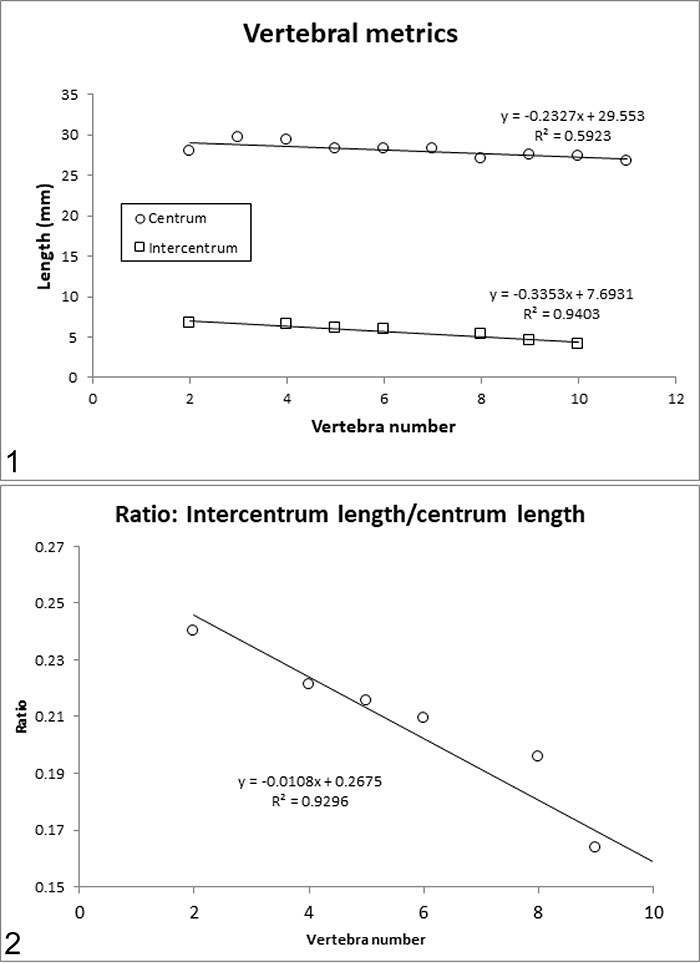 FIGURE 9. Metrics and statistics of the vertebral column as preserved in the holotype of Gordodon kraineri, NMMNH P-70796. 1, Neural spine length increases moving posteriorly along the vertebral column for at least the first 14 vertebrae. 2, Scatterplot of tubercle diameter (measured at 1/2 length) as a function of length. The relationship of diameter to length is very weak; diameter essentially cannot be predicted by length. 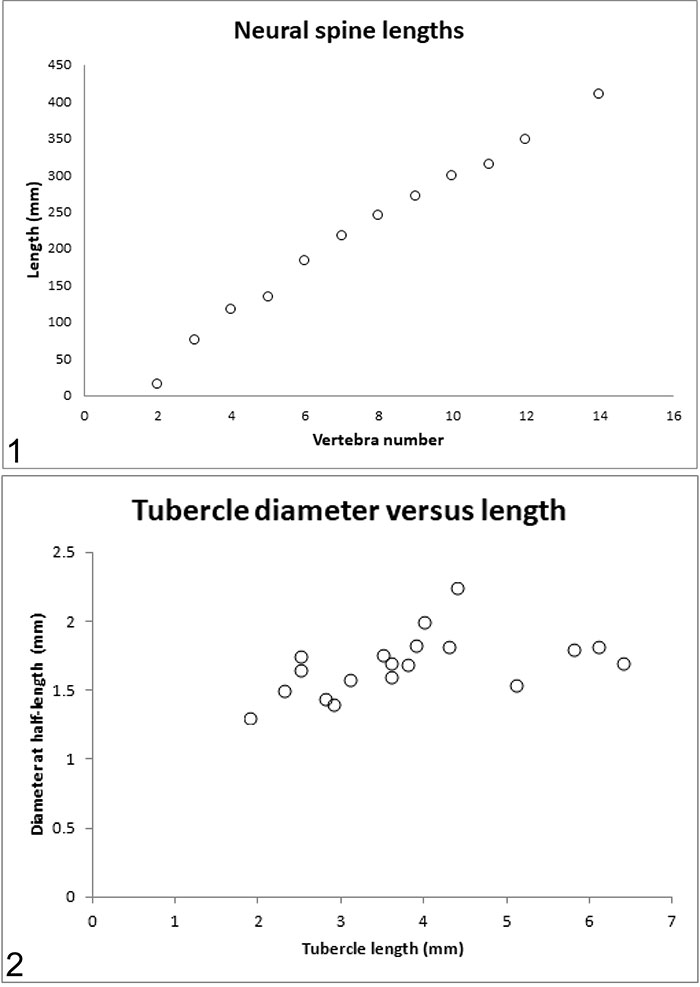 FIGURE 10. Metrics and statistics of the vertebral column as preserved in the holotype of Gordodon kraineri, NMMNH P-70796. 1, Tubercle diameter (measured at 1/2 length) is not organized with respect to height above the base of the neural spine. Tubercle diameter cannot be predicted by position along the length of the neural spine. Data from neural spines 4, 7, and 10. 2, Tubercle spacing distribution: histogram with normal curve fit and cumulative probability plot with 95% normal confidence intervals. Spacing between tubercles is normally distributed, and they do not occur in opposing pairs except by random chance. Data from neural spines 4, 7, 8, and 10. N = 36. 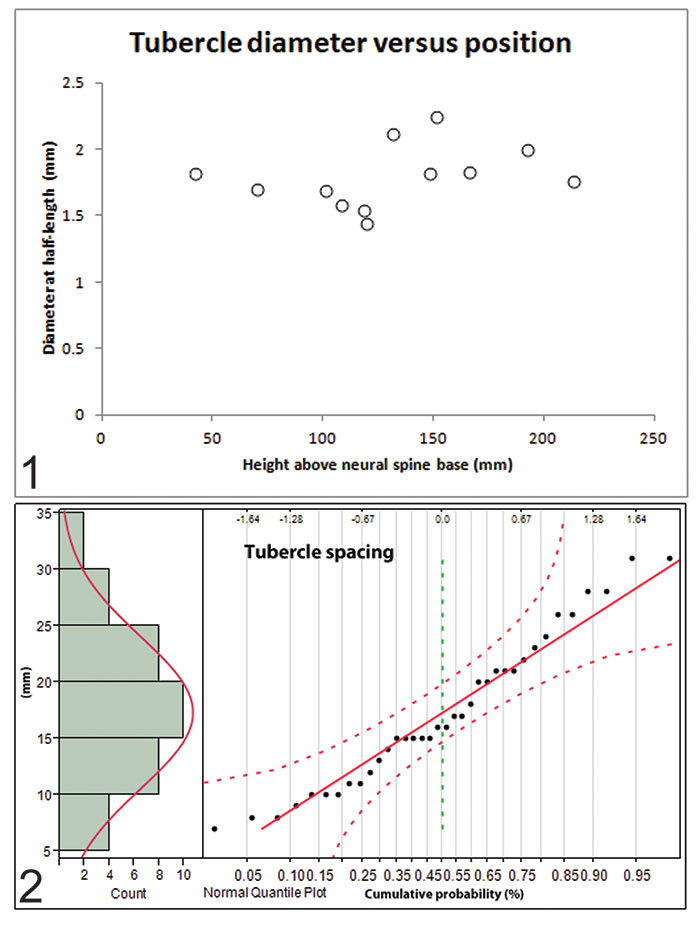 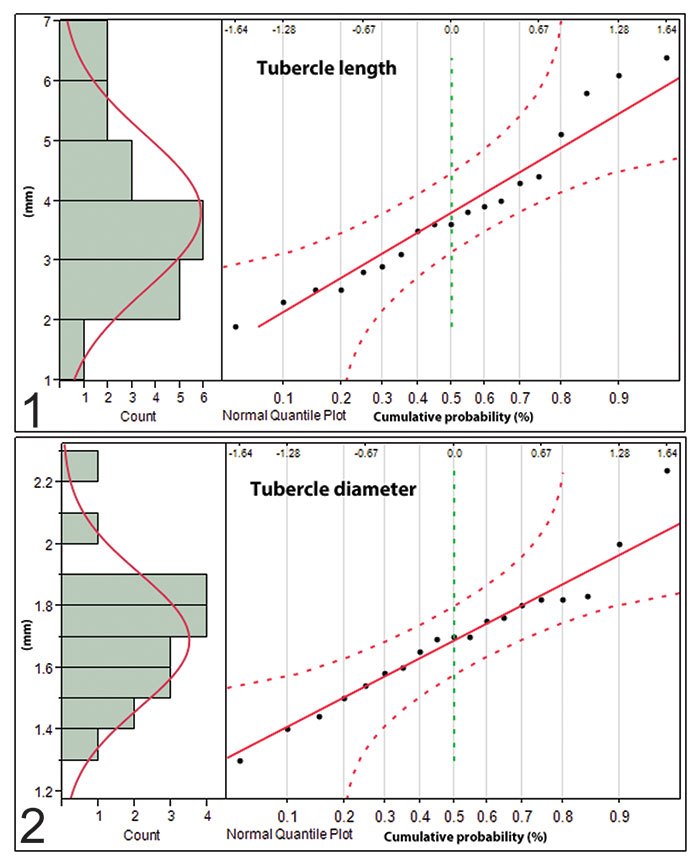 FIGURE 12. Distribution of tubercles along the length of the neural spines in Gordodon and Edpahosaurus. 1, Examples of linear distribution types: Ordered (equally spaced, like fence posts), Random (arranged according to the Poisson statistical distribution), and Aggregated (arranged in clusters with significant spaces between them). 2, Plot of natural logs of means and variances of data sets of distances between tubercles along the neural spines divided into 2, 3, 4, 5, 6, 7, and 8 equal length segments comparing the distribution of tubercles of Gordodon kraineri and Edaphosaurus pogonias. The slope of the lines, not their absolute values, is the pertinent factor: slope <1 indicates an ordered distribution; slope = 1 indicates random (Poisson) distribution; slope >1 indicates aggregated distribution. Because of limited sample size, scatter in the data points was high (note low R2 numbers in the curve fit equations), but the results are clear. The slope of the Gordodon curve fit line is 0.95, indicating a near-perfect Poisson distribution, whereas the slope of the E. pogonias curve fit is 0.38, indicating a well-ordered distribution. 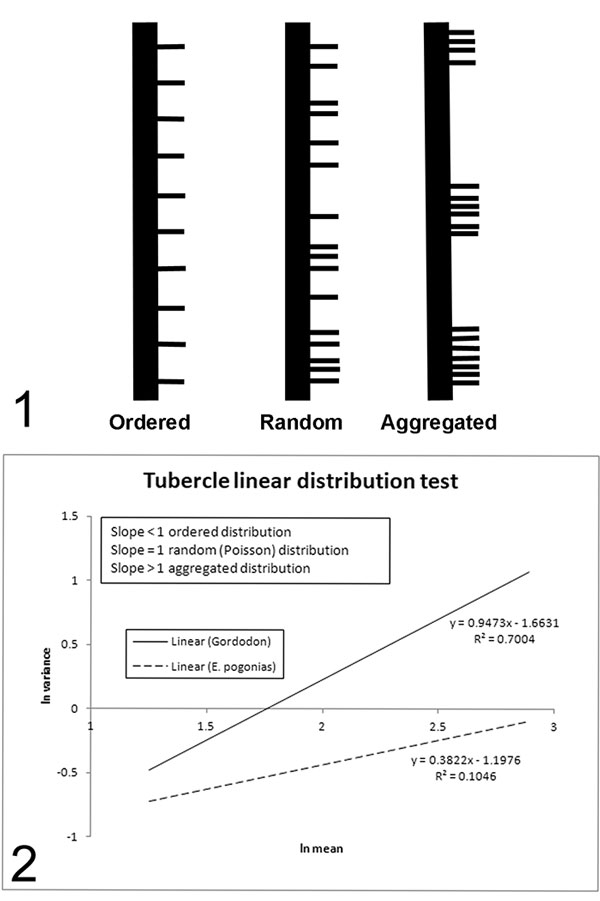 FIGURE 13. Comparison of the relative robustness of the axis (1), the post-axial cervicals (2), and the anterior dorsals (3) of Gordodon to that of several eupelycosaurs. The posterior height of the centrum is divided by its maximum length, so higher numbers indicate a relatively short, robust centrum and lower numbers indicate a relatively long, slender centrum. E. = Edaphosaurus, D. = Dimetrodon, S. = Sphenacodon. 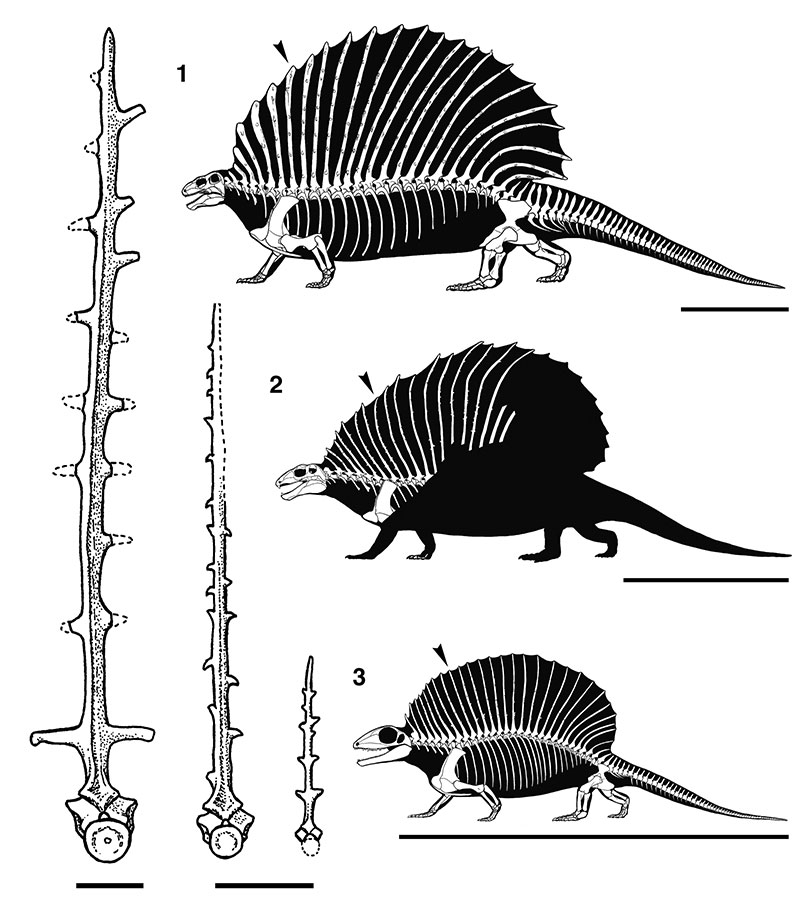 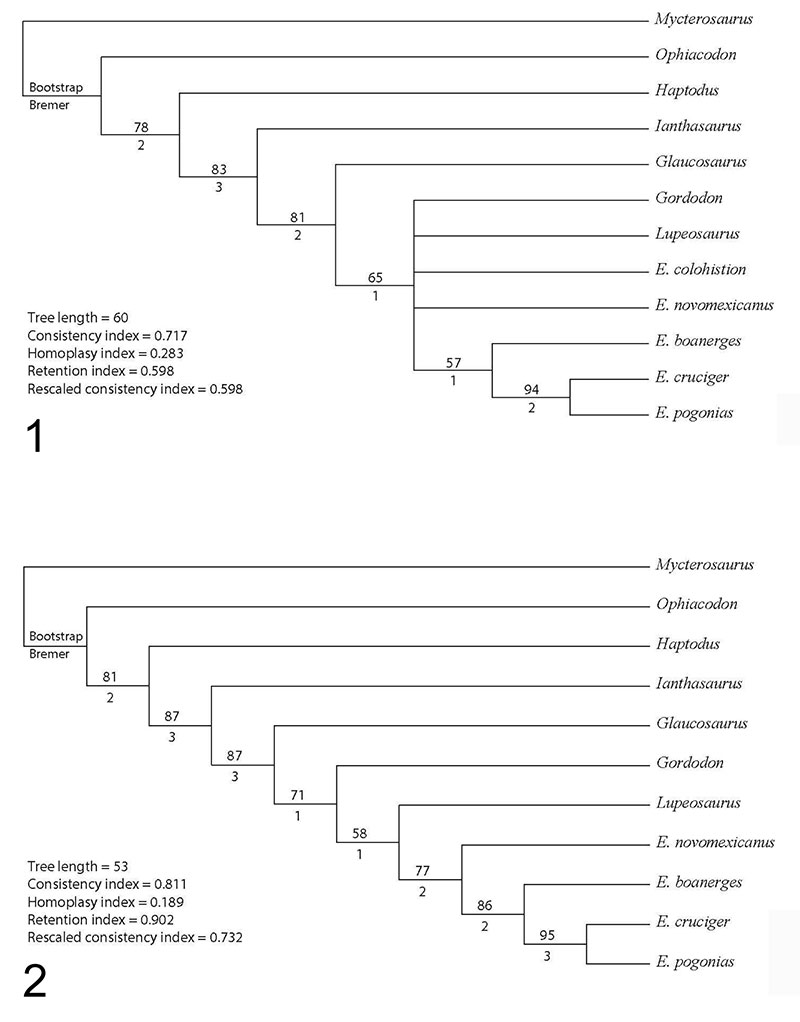 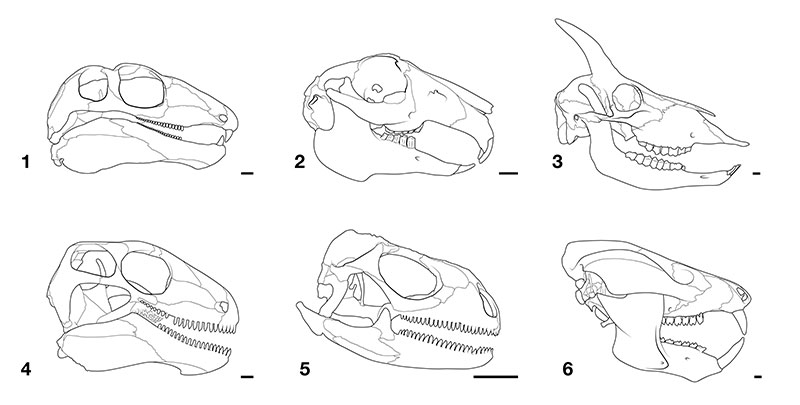 FIGURE 17. Maximum gape and origin-insertion ratio. Quantifunctional model of the proposed superficial adductor muscle of Gordodon originating at a circular, rugose boss on the jugal and inserting on an oval rugosity on the lateral posteroventral apex of the angular. 1, Model superimposed on the skull drawing. 2, Line diagram of the model after Herring and Herring (1974) in which the bold line represents the jaw closed (gape = zero degrees). Labels a, b, and l are as in 1, above: a = distance from jaw joint to muscle origin; b = distance from jaw joint to muscle insertion; l = the action line of the muscle and (by Pythagorean theorem) its length with the jaws closed (6.69 cm); L = action line and length of muscle with jaws open; ϕ = angle between a and b with jaws closed (~90o); θ = angle subtended by jaws when wide open, i.e., the maximum gape. 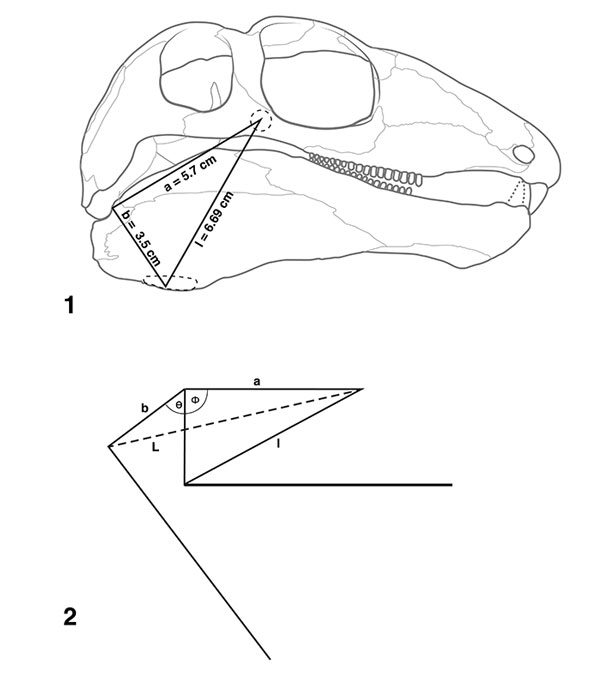 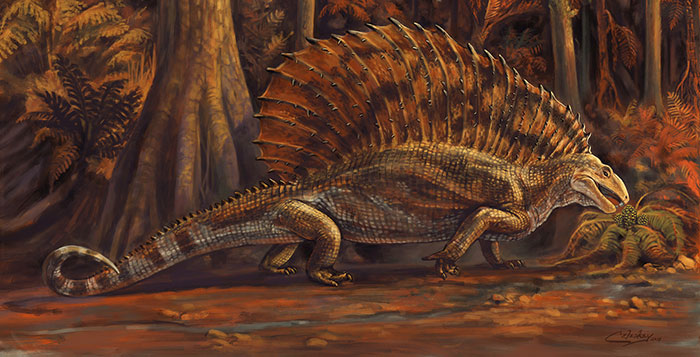 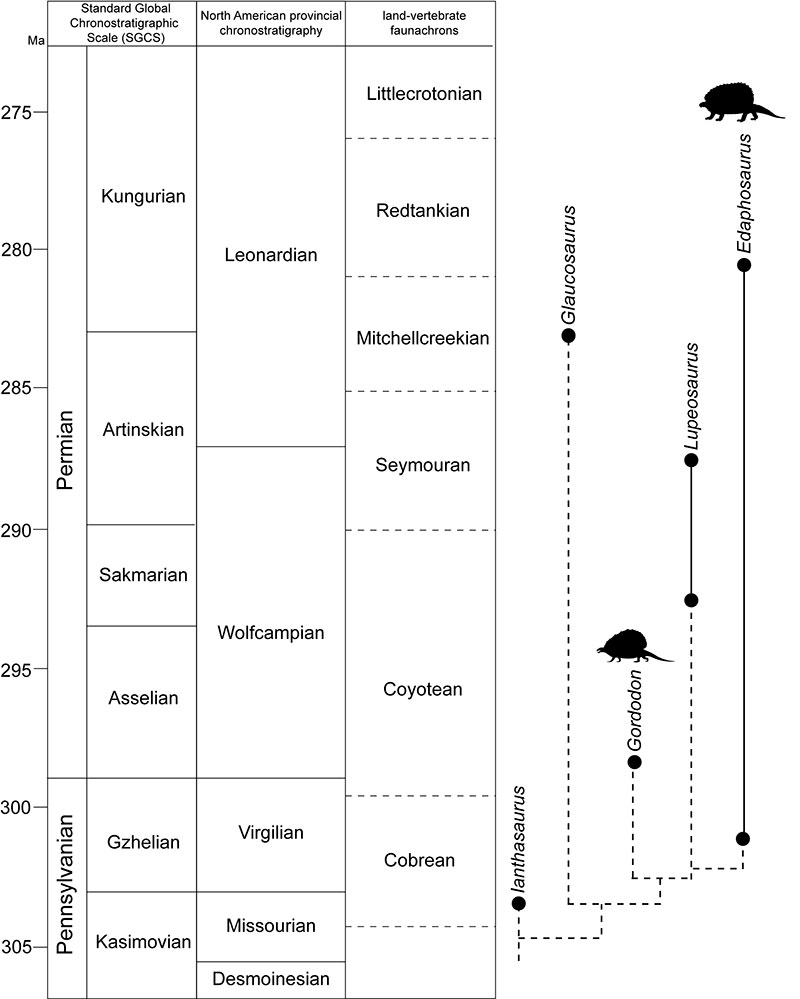