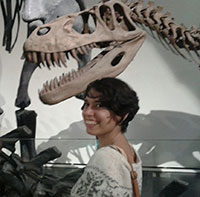 Lorena Palencia has a BS in Biology from Universidad Autónoma de Madrid, and MS in Advanced Paleontology from Universidad de Alcalá de Henares. She did practices at Spanish Geological and Mining Survey (Geomining Museum area) during 2014, 2015, 2016 and 2017. She is a young researcher who is initiating hers first research in fossils arachnids of Spain. She is interested in continued researching taphonomy, taxonomy and paleoecology of fossil arachnids or other arthropods and be able to accept new challenges. 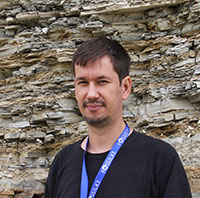 Enrique Peñalver is a Full Researcher at the Spanish Geological and Mining Survey (Geomining Museum area). He is biologist and received a doctorate in paleontology with an emphasis in Miocene insects preserved in paleolakes. His post-doctorate at the American Museum of Natural History focused on paleobiology of insects preserved in Miocene Dominican amber. He is fundamentally interested in fossil insects in compression and amber outcrops, and especially his research combines taphonomy, taxonomy and paleobiology to obtain well-founded results and conclusions. He is a member of the Spanish Cretaceous amber project (current CRE project) and has over 100 publications including ones in Science, Nature Communications, Current Biology, eLife and Proceedings of the National Academy of Sciences, and some technical and popularization books. 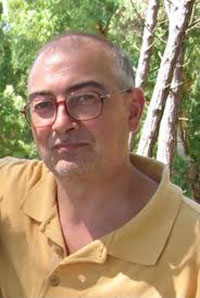 Carlos Prieto is Senior Lecturer at the Department of Zoology and Animal Cell Biology (University of the Basque Country), where he has developed its scientific career. He received its doctorate in Zoology with a dissertation on the Helicoidean land snails and afterward, he combined teaching of Zoology and Zoogeography with research on land snails, and also on harvestmen, from the Iberian Peninsula. Harvestmen research was initiated also on Afrotropical fauna, mainly from Equatorial Guinea and Cameroon, and more recently on cave fauna from Basque region. He has described dozens of new taxa, including eight genera, and he cures University collections of Iberian and Afrotropical harvestmen and Basque cave fauna.

Doctor in Biological Sciences. Teacher of Palaeobiology at the Universidad Autónoma de Madrid (UAM). Member of the Center for the Integration in Paleobiology (UAM). Research on Mesozoic Paleoichthyology, Paleoecology, and Taphonomy. Co-editor of the book Las Hoyas: A Cretaceous wetland.