FIGURE 1.The μCT-system nanotom® m. 2, Vertical placement of the glass pipette in front of the X-ray source. White arrow points to the specimen. 3, Typical radiograph of the specimen taken from the screen. The glue is less X-ray absorbing than the object of interest, see lower part of the image.

FIGURE 2. Representations of the µCT-data of Borelis schlumbergeri Reichel (1937), specimen 77023-1 using AVIZO 7 software. 1, External view of test showing chamber sutures and the apertural face with a single row of main apertures. 2, Axial section through the proloculus showing the calcareous test material as greyed material (slightly transparent) and empty spaces of chambers with chamberlets in orange color. 3, Equatorial section through the proloculus in slight oblique view. Again, the test material is colored in grey and empty spaces (chambers) in orange. Preseptal passages are easily recognized in the regularly coiled portion of the test as deep holes before every septum. The nepiont is recognized by its more irregular arrangement of chambers within the first three coilings around the proloculus. Black numerals indicate the same chamber numbers as in Figure 4 below. Note, that in the equatorial section, the chambers are represented by sections through chamberlets. The bracketed chamber number (21) indicates a section through a septulum wall. 4, Tangential section through chambers 45 and 46 illustrating direct, non-alternating arrangement of septulae. Horizontal and vertical scale-bars in Figure 2.1 and Figure 2.3 represent 200 µm and 100 µm, respectively. 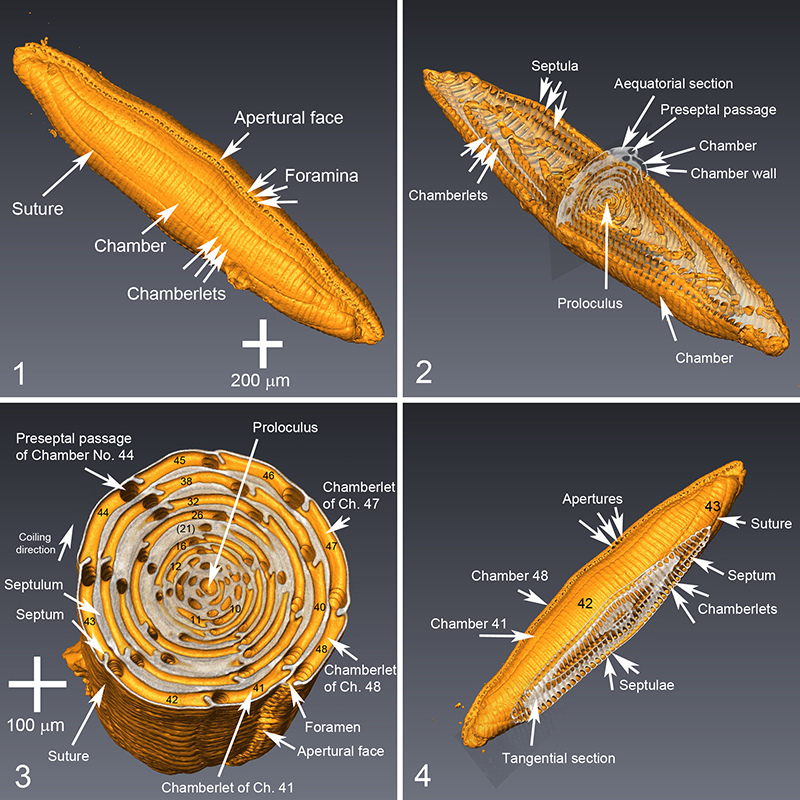 FIGURE 3. Axial section of Borelis schlumbergeri (specimen 77023-1) through a reduced image stack, i.e., every fourth image used, illustrating the subdivision of chambers into arrays of chamberlets. Outer chambers show a regular arrangement around the coiling axis with a simultaneous elongation of the chamber form. The vertical plane is an equatorial section through the proloculus. Visualization done using Voxler2 software. See Appendix 2 and Appendix 3 for launching an animation through the axial sections (Appendix 2 in avi format, Appendix 3 in gif format).

FIGURE 4. Reconstruction of the chamber voids representing the protoplasmic fillings of Borelis schlumbergeri (specimen 77023-1). 1, Early nepiont showing the proloculus and the first 2½ volutions, just prior to duplication of chambers into chamberlets (splitting into chamberlets begins in chamber # 6). The chambers in that stage are curved tubes and are arranged in three almost perpendicular planes around the proloculus. Color coding: White = proloculus; green (chamber #1) = deuteroconch; chambers #2 (red), #3 (blue-green), #4 (cyan) and #5 (blue) are juvenile chambers. Arrows point to constrictions between successive chambers. 2, Late nepionic stage beginning with chamber #6, where the division of chambers into chamberlets begins. Chambers #6 (orange), #7 (green) and #8 (yellow) are the first chambers with two chamberlets. Chamber #9 is the first chamber showing four chamberlets. 3, Early ephebic (adult) stage, where planispiral arrangement of chambers, elongated growth of chambers and fusiform shape are already clearly visible. Please note the continual arrangement of chamberlets and spaces in between them from one chamber to the next, which is an important diagnostic feature and which is particularly well recognizable in this view. 4, Mid-adult stage until chamber #34 (bright green). 5, Complete cell (gerontic stage) until chamber #48 (pink). During the gerontic stage the growth rate becomes reduced and structural irregularities occur (Hottinger, 2006). The total length of the reconstructed soft cell-body is 1995 µm. The inset illustrates the pole view. 6, Detail of the late adult cell showing thickened and fused chamberlets in chamber #45 (yellow) and #46 (blue), possibly indicating cell lesion perhaps after a storm event. Black arrow indicates the preseptal passage string of cytoplasm connecting all chamberlets of chamber #44. Vertical and horizontal scale-bars (in µm) indicate decreasing magnifications. For launching an animation showing the chamber addition from proloculus to the adult stage see Appendix 1. A high-resolution version of this animation is provided in Appendix 4. A further video given in Appendix 5 illustrates the combination of axial sections and lateral views of chamber fillings from adult to juvenile stages. 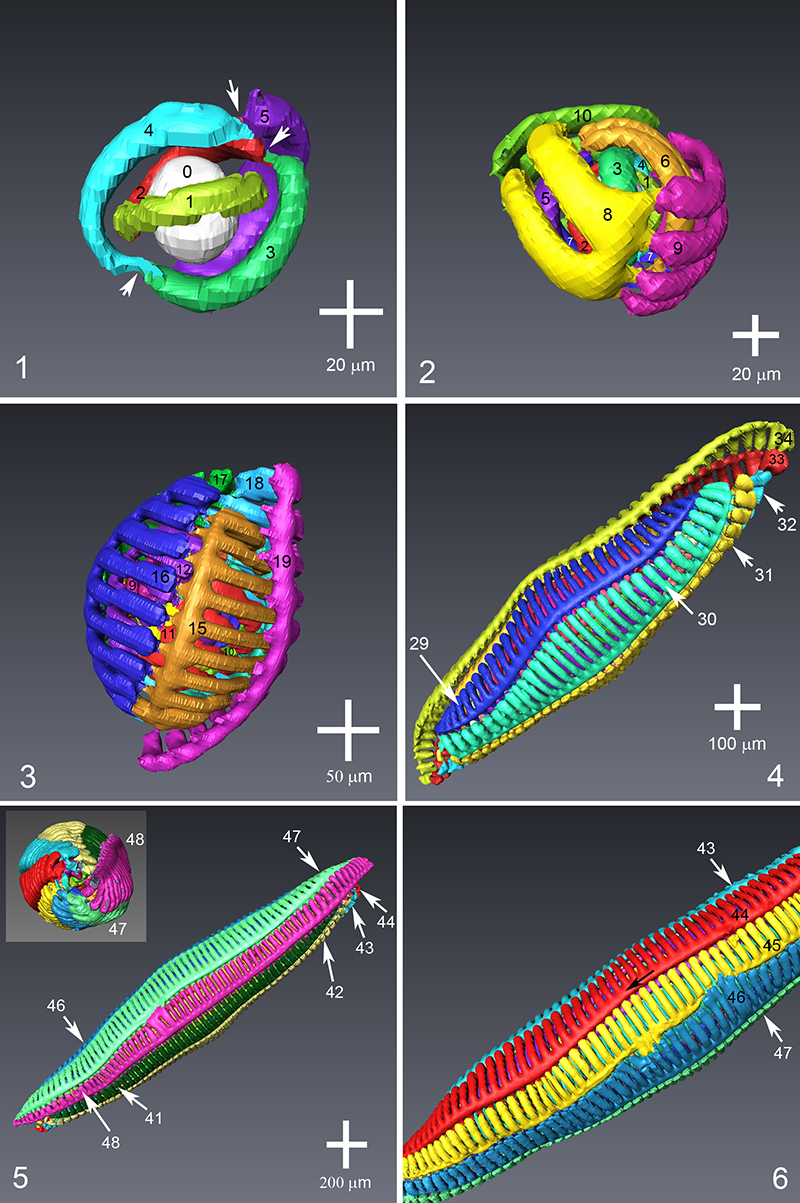 FIGURE 5. Relationship between reconstructed protoplasm and test in Borelis schlumbergeri specimen 77023-1. 1, Position of the late nepionic cell in the remaining part of the test. Yellow=chamber#8. Chambers of juvenarium indicated with black and white numerals, chambers otherwise are indicated with red numerals. Note that only the uppermost chamberlet of each chamber is labelled; chamberlets of the same chamber appear in this perspective as stacked series (see for example the visible three chamberlets of chamber #44, where the lower two chamberlets are labelled in italics and the uppermost chamberlet of chamber #44 is indicated in bold). 2, Emplacement of the protoplasm in chamber #47 (green) and chamber #48 (pink) in the adult portion of the test. The protoplasmic stream filling the preseptal passages interconnect chamberlets within a single chamber. From this “preseptal string” cytoplasm transverses through apertures from one chamber to the next as can be seen in the main apertures along the apertural face of the test.

FIGURE 6. Manfred Reichel’s reconstructions of Borelis and other alveolinids. 1, An early version of the reconstruction of Borelis schlumbergeri, that led to the published illustration of figure VIb (Neoalveolina schlumbergeri) on Plate XI in Reichel (1937). 2, Unpublished drawing of an equatorial section (left drawing) and a reconstruction of the nepiont of Borelis (Neoalveolina) melo (right drawing). Reichel’s nepionic “sarcode” reconstruction based on thin-section analysis shows the irregular arrangement of chambers in the “peloton” and is surprisingly similar to the present µCT results from Borelis schlumbergeri, cf. Figures 5 and 6. Both drawings are undated (probably drawn between 1931 and 1937, deposited in the geological archive of the Natural History Museum Basel). 3, and 4, Plasticine structural model for Borelis shown from two different views, fabricated by Manfred Reichel in the 1930s. Dimensions of the model 11 cm x 7 cm x 4 cm. prc1 denotes the preseptal canal of the ultimate chamber, prc2 denotes the preseptal canal of the penultimate chamber. The spatial arrangements of the preseptal passage, the main apertural openings along the apertural face and chamberlets in a tangential section are best shown in Figure 6.4. 5, Undated “sarcode”-model fabricated by M. Reichel with gypsum from casts showing chamberlets (ch) and septulae (s) of two neighboring chambers in continuous alignment (“mode continue” des cloisonnettes in Reichel, 1937) as is observed in Borelis. Dimensions 10 cm x 7.5 cm x 3 cm. The arrow indicates the “sarcode” (protoplasmic) string through a preseptal passage. 6, Wooden model of Borelis made by M. Reichel. Dimension 6 cm x 5.6 cm x 4.8 cm. 7, Proximal view of the nepiont and early adult chambers of a Paleocene to Eocene Alveolina to illustrate differences in the ultra-structures observed in Borelis. This model was also prepared by Manfred Reichel. Dimension 7.5 cm x 5.5 cm x 5.5 cm. Models shown in Figure 6.3, 6.4, and 6.5 are deposited in the Collection of Foraminiferal Models of M. Reichel and L. Hottinger at the Natural History Museum, Basel. Models in Figures 6.6 and 6.7 are held in the micropaleontological teaching collections of the Geological-Paleontological Institute, University of Basel. 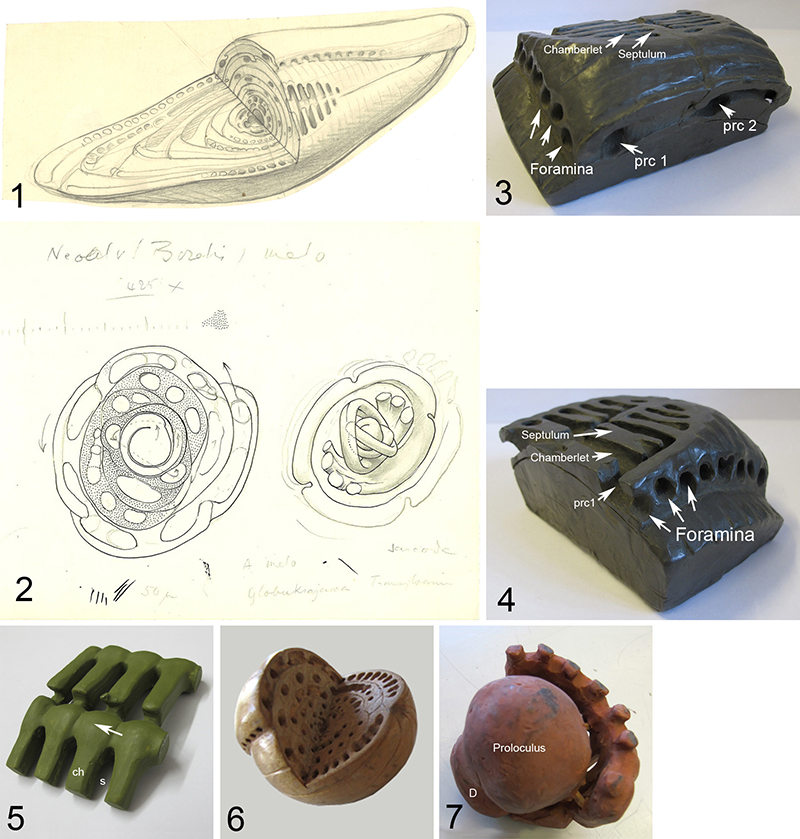 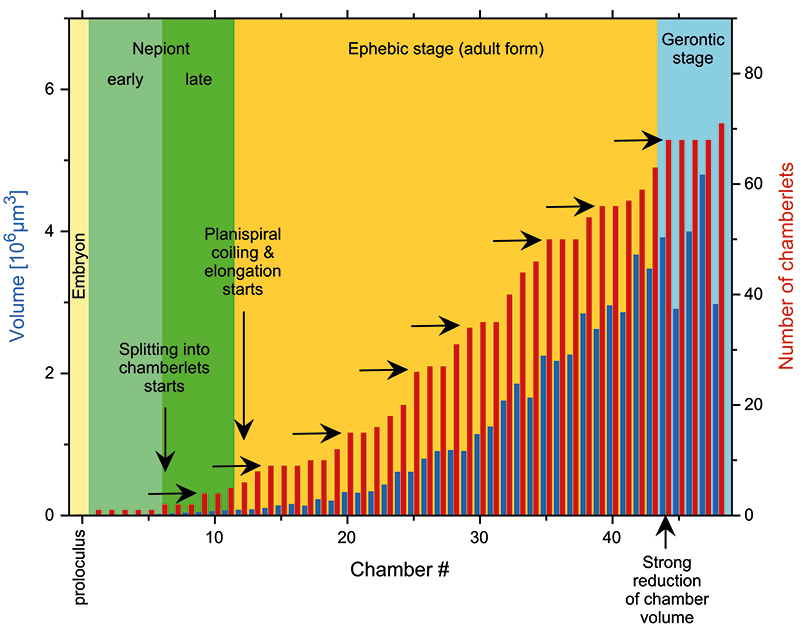 FIGURE 9. The cytoplasmic filling of a fusiform larger benthic foraminifer. 1, Cardboard model of a Loftusia fabricated by Manfred Reichel, deposited in the micropaleontological teaching collections at the Geological-Paleontological Institute, University of Basel. It illustrates schematically the long extension of the protoplasmic sheet when unrolled. Width of the cardboard sheet at the left end=9 cm, length of the cardboard sheet when completely unrolled=80 cm. 2, Partially unfolded reconstructed cell of specimen 77023 of Borelis schlumbergeri investigated herein. The last seven chambers, i.e., #42 to #48, are unrolled. The colors correspond to those of the respected chamber numbers illustrated in Figure 4 and Figure 5. Note that the surface of the chambers become increasingly curved when getting more juvenile and, therefore, cannot be flattened without breaking up sutures between neighboring chambers. The same difficulty arises if one tries to flatten an orange peel into a plane. “prc” (flash) indicates the protoplasmic string connecting individual chamberlet fillings through the preseptal canal or passage of chamber #48. Eventually, strings from neighboring chambers merge together at the polar ends of the cell (see inset in Figure 4.5).