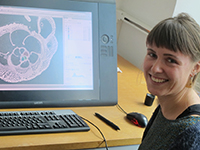 Siri K. Kellner is currently a Ph.D. student at the Museum für Naturkunde in Berlin where she is researching for and developing a virtual exhibition about cell type evolution. Her project is part of the EvoCELL training network which consists of 10 European institutions aiming at studying the evolution of cell-types and tissues in a diverse range of animals. She completed her masters degree in paleobiology at the University of Bristol with a thesis about the genome evolution of symbiosis in the Archaea. Prior to these studies she gained research experience within the field of micropaleontology at the University of Western Australia and the Natural History Museum of Basel. During her voluntary time in Basel she focused on the reconstruction of foraminifera in 3D with the program AVIZO. 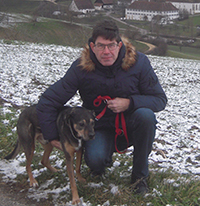 Michael Knappertsbusch is curator for micropaleontology at the Natural History Museum in Basel, Switzerland. He studied geology at the Federal Institute of Technology (ETH) in Zürich, Switzerland, and graduated in 1986 with a micropaleontological diploma thesis about planktonic foraminiferal biostratigraphy in Northern Italy. In 1990 he obtained a Ph.D. in Geology from ETH about coccolithophorids with a special emphasis on the morphological evolution of Calcidiscus leptoporus and related ancient forms. Residing in Amsterdam (Free University) from 1990 to 1994 he collaborated as a post-doc in the "Global Emiliania Modelling Initiative," a major investigation about the role of Emiliania huxleyi for the global carbon cycle.

Since 1994 he has been employed as curator for micropaleontology at the Natural History Museum in Basel (NMB), Switzerland. He runs the West-European Micropaleontological Reference Center of the DSDP and ODP and is responsible for the micropaleontological collections held at the NMB. His main research interest centers about mode and patterns of morphological evolution and biogeography of oceanic microfossils, mainly planktic foraminifera. Research includes the development of tools for morphometric investigations and visualization techniques for microfossils on the computer. An important milestone is the construction of an imaging system for automated foraminiferal orientation and imaging called AMOR and software tools for automated shell measurements. These tools are employed by for extended morphometric investigations of the Neogene planktic foraminifer Globorotalia menardii and related forms from a variety of deep-sea cores located in the Caribbean Sea, Eastern Equatorial Atlantic, off NW Brazil and from selected time-slices worldwide during the Holocene and Late Pliocene. Currently, we are run a research project testing the Agulhas Long Dispersal Hypothesis from the Indian Ocean or Pacific into the Atlantic Ocean and the Caribbean Sea, and its role for menardiform globorotalid evolution. 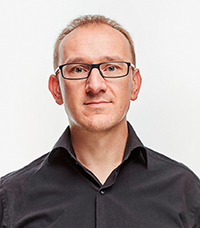 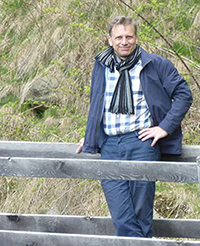 Bert Müller received a diploma in mechanical engineering, Berlin 1982, followed by M.Sc.degrees in Physics and English both from the Dresden University of Technology in 1989. In 1994, he obtained a Ph.D. in experimental physics from the University of Hannover, Germany. For his achievements, he was granted with the Morton M. Traum Award of the American Vacuum Society in 1994. From 1994 to 2001, he worked as a researcher at the Paderborn University, Germany, as Feodor Lynen Fellow and research associate at the EPF Lausanne, Switzerland and as team leader at the Physics Department, Materials Department and Department of Information Technology and Electrical Engineering at ETH Zurich, Switzerland. He became a faculty member of the Physics Department at ETH Zurich in April 2001. After his election as Thomas Straumann-Chair for Materials Science in Medicine at the University of Basel, Switzerland, he founded the Biomaterials Science Center in March 2007. Currently this center deals with nanotechnology-based artificial muscles for incontinence treatment, smart nano-containers to treat cardiovascular diseases, high-resolution X-ray imaging to visualize the human body down to the molecular level, computational sciences of tissues in health and disease and other applications of nanosciences in medicine. The mission of the research team can be summarized by employing physical principles for human health. Professor Müller teaches physics and materials science at the ETH Zurich and the University of Basel and has supervised doctoral students from medicine, dentistry, physics, nanosciences, and biomedical engineering. In 2014, he was elected as Fellow of SPIE and 2015 as an active member of the European Academy of Sciences and Arts. 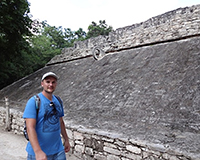 Georg Schulz received a diploma in theoretical physics 2008 at the Albert-Ludwigs-University Freiburg, Germany. He obtained a Ph.D. in applied physics at the University of Basel, Switzerland in 2012. After three years as postdoctoral research assistant between 2012 and 2015 he is leading the high-resolution X-ray imaging group at the Biomaterials Science Center at the University of Basel since 2015 dealing with three-dimensional visualization of soft and hard tissues with a spatial resolution down to the subcellular level using laboratory sources and synchrotron radiation. The main research topics of the group are musculoskeletal disorder, neurodegenerative diseases, implant materials, nanomedicine and paleontology. Since 2017 he became the manager of the ‘Micro- and Nanotomography’ Core Facility of the University of Basel offering high-resolution three-dimensional X-ray imaging services for industrial companies and other research groups.