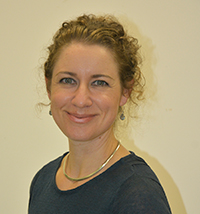 Natalie is a vertebrate zoologist, comparative anatomist and palaeontologist. She is currently Senior Lecturer in Anatomy in the Murdoch University and Research Associate of the Western Australian Museum. Her published research describes diverse aspects of functional morphology of Australian wildlife, but primarily focuses on the evolution of the musculoskeletal system in mammals, extant and extinct. 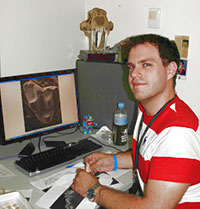 Kenny J. Travouillon is a vertebrate palaeontologist and palaeoecologist working at University of Queensland, in the School of Earth Sciences. He received a Bachelor of Science (Hons) and Ph.D. from the University of New South Wales, Sydney, Australia.

His early research aimed at clarifying the chronological position of the Riversleigh World Heritage Area (northwestern Queensland) fossil sites amongst the Tertiary of Australia, in absence of absolute dates, using multivariate analyses as a tool to group sites of similar age based on taxonomic information. His research also aimed at identifying the palaeoenvironments of Riversleigh's sites, using cenograms. Cenograms are a graphical representation of the logged body mass of mammals in a fauna. The shape of the cenogram can be use to predict whether the environment in which the fauna lives is open or closed and humid or arid.

He was recently awarded with the Robert Day Postdoctoral Fellowship at the University of Queensland, working on Peramelemorphian (bilbies and bandicoots) phylogeny and describing new taxa from Riversleigh and Etadunna (South Australia). 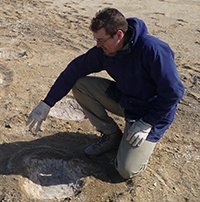 Aaron Camens finished his PhD at the University of Adelaide in 2010 and has been a palaeontology lecturer at Flinders University since 2014. His research interests include studying the functional morphology and evolution of vertebrates from the Australian Neogene, the taphonomy of fossil deposits and Pleistocene extinctions. His investigations into the vertebrate ichnology of Plio-Pleistocene deposits have revealed much about the distribution, locomotion and palaeobiology of the Australian megafauna. His fieldwork focuses on sites in central Australia but has included much of the Australian mainland as well as New Zealand and Madagascar.