Jon completed his award-winning PhD at Imperial College London where he researched evolutionary patterns in animals like dinosaurs and crocodiles. He was the Communications Director of ScienceOpen for 2 years, but has spent the last year as an independent researcher. He is the founder of the Open Science MOOC, the digital publishing platform paleorXiv, and currently works as a PLOS Paleo Community Editor. He has spent much of his recent time challenging the business practices of the scholarly publishing industry, including formal complaints to the European Commission, and working with Education International on a global campaign to democratise knowledge. He is also a Shuttleworth Flash grantee, and has also won an award for this work on peer review. As well as this, Jon was the lead author of the Foundations for Open Scholarship Strategy Development, is co-author for the Open Science Training Handbook, and is the Executive Editor for the OA journal Geoscience Communication. He has also written several kids books on dinosaurs. 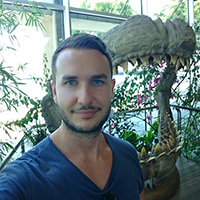 Dean is an internationally recognised multi-award-winning palaeontologist, presenter and author. He has travelled the globe and worked on many fascinating projects from excavating dinosaurs in the American West, to describing new species of prehistoric reptiles and winning a gold medal for excellence in science. A Visiting Scientist at The University of Manchester, Dean is passionate about communicating palaeontology with the public and regularly appears on television, including as series advisor and expert co-presenter for ITV’s Dinosaur Britain. He has written books, numerous scientific papers, and many popular articles. Dean is also the patron of the UK Association of Fossil Hunters (UKAFH) & Mary Anning Rocks.