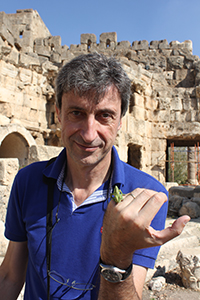 Since 2004, Bruno Granier is a full Professor and the Chairperson in Paleontology and Sedimentology at the University of Western Brittany - UBO, Brest (France). He holds a B.Sc. in Sedimentary Geology (1981) from P. Sabatier University, Toulouse (France), a M.Sc. in Geodynamics (1983), a Ph.D. in Stratigraphy (1987), as well as a D.Sc. (Habilitation) in Earth Sciences (2003) from Sorbonne University – UPMC, Paris (France). Before joining academe, he worked over a decade and a half for the oil industry. In 1991, he joined Total as Senior Carbonate Sedimentologist at its Scientific and Technical Research Centre in Saint-Rémy-lès-Chevreuse (France). In 1995, he was seconded to ADMA-OPCO in Abu Dhabi (United Arab Emirates), as a Petrography Expert. In 2001 he was back in Paris – La Défense with Total in the reservoir division. Bruno has authored or co-authored tens of technical reports and some 150 research papers – more than half of them, probably, deals with fossil algae. 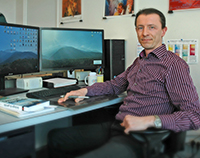 Alexandre Lethiers is a fulltime scientific draughtsman at the "Institute of Earth Sciences of Paris" and at the "Research Centre on paleodiversity and Paleoenvironments" of Sorbonne University – UPMC, Paris (France). There, since 2001, in addition to regular scientific or technical drawings for research or teaching, he makes small 3D figures and short 3D animation movies. Alexandre is willing to develop this sort of graphic design as a practical tool for scientific research and science popularization. He has coauthored some scientific papers, mostly in the field of micropaleontology, among which publications on the enigmatic Gilianellids.