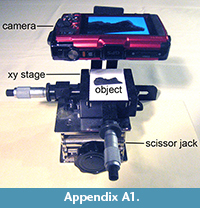 Procedure for generating a single, optimally-focused image from a two-dimensional grid of overlapping images.

In order to acquire an image of such a large area (approximately 79 mm2) at sufficiently high resolution to observe microwear, the apparatus shown in Figure A1 was assembled. The number given for the imaged area excludes regions where the outer, hypermineralized surface layer is not preserved and areas that were out of focus in the final image (on the upper right of Figure 6). The object to be photographed is placed on a precision, micrometer-driven XY translation stage. In actual practice, unlike in Figure A1, the camera lens is placed very close to the object, so that only a small part of the object is imaged. Keeping the camera in a fixed position, the object is translated so that overlapping images can be acquired in a two-dimensional grid. Merging the grid of overlapping images into a single, optimally focused image was carried out with the use of the Adobe Photoshop ™ program (version CC 2015 -16.0). 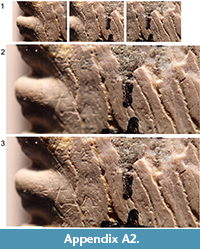 Figure A2.1-3 illustrates the method for a simple, one-dimensional case. Figure A2.1 shows three overlapping images of a part of TMM 40234-17 that were obtained by horizontally translating the tooth while keeping the position of the camera fixed. Figure A2.2 shows the three images overlaid by use of the Auto-Align Layers function. In order for this procedure to function properly, it is important that the object be translated but not rotated, as this function cannot compensate for a rotation. Figure A2.3 shows the result of applying the Auto-Blend Layers function to the aligned images. For every region of the combined image, this function selects the image with the clearest focus. This function is more often used to blend several images having the same field of view, but different focus settings, and is called “focus-stacking.” Figure A2.3 is a seamless, single image with improved overall focus.