Large, capsular fruits of Ericaceae have been identified from the Emerald Creek site of the Middle Miocene Clarkia flora of northern Idaho. We recognize the morphological similarity of these fossils to fruits of the subfamily Vaccinioideae, specifically to the extant genus Oxydendrum (sourwood), which has a single extant species that lives primarily in the southeastern US and with members of the Lyonieae and Gaultherieae. We present a new species of vaccinioid capsular fruit as Juddicarpon benewahensis Smith and Manchester gen. et sp. nov. from an infructescence. The new species has fruits that are twice the size of those in extant Oxydendrum and outside the modern size range of vaccinioids with capsular fruit. This fossil is significant as the first record of fossil vacciniod fruit from Western North America.

Copyright: October 2019 Paleontological Society.
This is an open access article distributed under the terms of Attribution-NonCommercial-ShareAlike 4.0 International (CC BY-NC-SA 4.0), which permits users to copy and redistribute the material in any medium or format, provided it is not used for commercial purposes and the original author and source are credited, with indications if any changes are made.
creativecommons.org/licenses/by-nc-sa/4.0/ 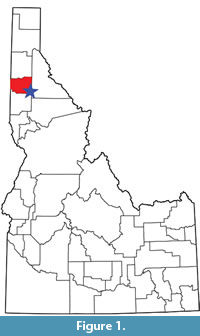 The oldest known fossil occurrence of Ericaceae is Paleoenkianthus sayrevillensis from the Turonian (ca. 90 Ma) of New Jersey (Nixon and Crepet, 1993). Today the family has a global distribution (Tucker, 2009) and about 124 genera and 4,250 species (Christenhusz and Byng, 2016). Fruit can be a capsule, berry or drupe (Tucker, 2009). The subfamily Vaccinioideae Arn. of the Ericaceae includes 46 genera that are distributed worldwide except for Antarctica and found in almost every biome (Tucker, 2009). Its fruit morphologies are highly diverse and vary in all of the forms mentioned for Ericeaceae (Tucker, 2009). Here, we describe an infructescence conforming morphologically to the Vacciniodeae from the Middle Miocene of Idaho. This represents the first report of a vaccinioid from North America and one of the few occurrences of Ericaceae known from fossil fruits.

The fossil was microCT scanned with a GE Phoenix V|tome|xm240 CT Scanner at the Nanoscale Research Center, University of Florida, Gainesville, Florida. The resulting stack of tiff files was then processed in Avizo 9.0 Lite (FEI Visualization Science Group, Bordeaux, France) to generate an isosurface rendering. Subsequent processing of the isosurface utilized MeshLab (ISTI - CNR, Italy) using the lattice and depth map shaders. The specimen and scans were then compared with modern specimens of Oxydendrum arboreum using UF0202 from western Tennessee and UF0203 from the Indiana University arboretum, Bloomington, Indiana, both housed in the modern fruit collection at the Florida Museum of Natural History Paleobotany Collection, Gainesville, Florida and FLAS 32600 L.E. Arnold s.n. from Bristol, Florida, housed in the University of Florida Herbarium (FLAS), Gainesville, Florida.

Generic and specific diagnosis. Infructescence is a terminal raceme at least 5.5 cm long with pedicelate fruits drooping to one side of a moderately thick (ca. 1.9 mm thick) axis (secund raceme) with 10, five-valved ovate-elongate capsular fruits (Figure 3.1). Pedicels are curved and about 0.6 cm long and just under 2 mm in diameter (Figure 3.1-3, Figure 4.1-2). Pedicels have one visible bracteole scar (Figure 4.1). Each fruit has five hypogynous persistent, elongate and pointed sepals (Figure 4.3). Fruits are between 0.8-1.1 cm tall and 0.2-0.6 cm wide (with the majority of fruit at the maximum end of the previous ranges) with long valves lacking thickened sutures (Figure 3.1-3, Figure 4.1-3) and a basal bulge between valves (Figure 4.1). One persistent style with truncated stigma is preserved and extends 6 mm beyond the fruit apex (Figure 3.1-2).

Etymology. The genus Juddicarpon honors Walter S. Judd, who shared his expertise on extant Ericaceae with us. The epithet benewahensis refers to Benewah County, Idaho, where the fossil was found.

Holotype. Specimen UI-P37-2019-1 housed with the herbarium paleobotanical collections at University of Idaho. 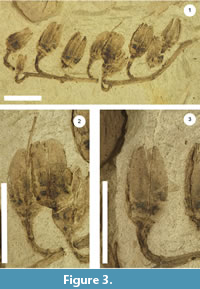 The specimen is broken in such a way as to reveal the fruits in longitudinal fracture. In most of the attached fruits only three valves can be counted, but five are inferred from the symmetry (Figure 3.1-3, Figure 4.1-4). Five-valved capsular fruits with persistent hypogynous sepals are present and relatively common within the Ericaceae (e.g., Enkianthus, Pieris and Lyonia), however, the Ericaceae are not the only plant family to have this combination of characters (e.g., other families in the Ericales such as Theaceae and tribe Hibisceae in the family Malvaceae) (Kron et al., 1999; Pfeil et al., 2002; Luna and Ochoterena, 2004). We distinguish this fossil from Theaceae because fruits of that family are generally borne solitary rather than in infructescences. We distinguish it from the Malvaceae based on the combination of features discussed below.

Within the Ericaceae, many members of Vacciniodeae have flowers and fruits borne mainly on one side of the axis, i.e., in secund arrangement (e.g., Oxydendrum, Pieris, Lyonia, Leucothoë and Eubotrys) (pers. obs.). Because the basal portion of the inflorescence was not collected, it is possible that instead of a raceme it could be one unit of a larger panicle. Among the extant genera of Vaccinioideae with secund infructesences, only the monotypic Oxydendrum arboreum (L.) DC has ovate to elongate fruits, non-thickened sutures, a terminal peduncle and occasional bulges at the base between the valves (Figure 4.5-8) (Kron et al., 1999; Kron et al., 2002). Even though septa were not preserved, we interpret the fruit to be loculicidal because the valves open through the basal bulges, a position which seems unlikely for a septum to run through. Loculicidal fruits are a consistent character in the dry-fruited genera of Vaccinioideae. We interpret the infructescence as being determinate because the pedicel of the terminal fruit does not seem to curve laterally. These combined characters also do not exist in the Theaceae or Malvaceae. Thus, we infer that the fossil is closely related to the extant genus Oxydendrum. 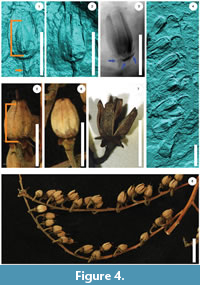 We extended our comparison to include other genera of the Vaccinioideae with capsular fruits such as Lyonia, Agarista, Pieris and Leucothoë. For phylogenetic context, an ericalean phylogeny by Schwery et al. (2015) shows Vaccinieae and Andromedeae (which includes Zenobia) as a clade with Gaultherieae (which includes Leucothoë) sister to it, Oxydendreae sister to that and Lyonieae (which includes Pieris and Lyonia) sister to that. It is possible for Lyonia to have secund racemes (e.g., Lyonia ligustrina var. ligustrina though capsules are globose) and to have elongated capsules (e.g., Lyonia mariana although it does not have a secund raceme). However, fruit size does not vary much within species for the dry fruit of Vaccinioideae. Only one specimen, a Lyonia (FLAS 53054) unidentified to species level, had varying fruit size on the same branch during our search. Because there is only one living species from which to infer useful characters for identification in the Oxydendreae and in view of the morphological variability within the rest of Vaccinioideae we feel that the combined traits warrant a new genus and species within the Vaccinioideae. It is noteworthy that these fossil fruits are larger than any we have observed among extant Vaccinioideae. Larger capsular fruits occur in other clades of Ericaceae, such as in Rhododendron, but the observed morphology fits better with the Vaccinioideae. It seems possible that this extinct genus corresponds to a lineage that combines features of more than one modern clade within Ericaceae. We suppose that the large fruit size may be a plesiomorphic condition within Vaccinioideae, but more fossils and a more comprehensive morphological phylogenetic analysis would be needed to test this.

There are no living vaccinioids in Idaho today with capsular fruit. Instead, the modern genera are located primarily in eastern North America and Asia. A notable exception is Leucothoë davisiae from California and Oregon (USDA, n.d.). It is possible that it went extinct due to the region drying and having no refugia to escape because of being surrounded by mountains.

We take this opportunity to comment on the fossils used for calibration of the phylogeny of Ericaceae. Schwery et al. (2015) used the fossil leaf, Vaccinium creedensis Axelrod (1987), as a dating calibration point for Vaccinium. However, this species was already transferred to Berberis by Wolfe and Schorn (1990) based on seven diagnostic characters and is thus inapplicable for calibrating ericalean phylogeny. In general, the assignment of fossil leaves to particular extant genera of Ericaceae should be accepted with caution because of the convergence of leaf architectural patterns both within and outside the family. Fossil fruits and flowers, when available, can provide greater systematic resolution within the Ericaceae.

Juddicarpon benewahensis is the first fossil vaccinioid fruit to be recognized from North America. Its unique combination of characters and large size make it difficult to place precisely within the Vaccinioideae, adding to the subfamily’s complex evolutionary history, but it helps explain the timing of how this successful group spread.

We thank Dr. W. Rember for making the specimen available for study, Dr. W. Judd for his help with the identification of this specimen and K. Perkins for his assistance at the University of Florida Herbarium. We thank T. Lott for his help in reviewing and editing the proofs.

Friis, E.M. 1985. Angiosperm fruits and seeds from the Middle Miocene of Jutland (Denmark). The Royal Danish Academy of Sciences and Letters, 24(3):3-165.

Mai, D.H. 1998. Contribution to the ﬂora of the middle Oligocene Calau Beds in Brandenburg, Germany. Review of Palaeobotany and Palynology, 101:43-70.