Injured trilobites in the TMP: Authors 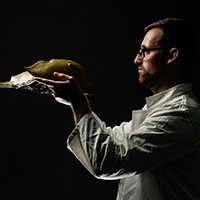 Russell D.C. Bicknell is a post-doctoral researcher at the University of New England, Australia. While interested in an array of palaeontological topics, he has dedicated a large portion of his research thus far to horseshoe crabs and related chelicerate groups. He is particularly passionate about combining traditional systematic palaeontology with geometric morphometric analyses to uncover evolutionary patterns. 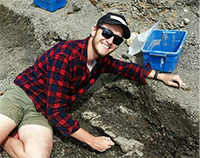 Brayden is a MSc student from the University of New England working on a juvenile hadrosaurid bonebed from the Wapiti Formation in central-west Alberta, Canada. Brayden’s main research interest is the palaeobiological information that can be obtained from bonebeds, particularly the ontogeny, inter and intraspecific behaviours, and life histories of dinosaurs. His current project is the description of an exclusively juvenile lambeosaurine (Hadrosauridae) bonebed, increasing our understanding of age segregation in dinosaurs, and a broad scale analysis of the patterns and distributions of hadrosaurid bonebeds. As part of his research, Brayden annually participates in fieldwork in Canada as part of the Boreal Alberta Dinosaur Project [BADP]. Brayden’s research interests expand beyond the scope of Mesozoic vertebrates, with interests in palaeobiology throughout geological time.