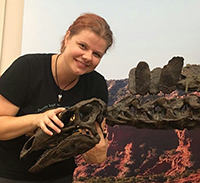 Kayleigh Wiersma-Weyand is a vertebrate paleontologist and PhD student in paleontology at the University of Bonn. She finished her B.Sc and M.Sc in Geosciences at the University of Bonn, with specializations in Sauropod Dentition and Histology. Her PhD Research focuses on the preservation of organic structures within fossilized bone, the chemical composition, and whether these structures represent original soft tissue or are instead biofilms. 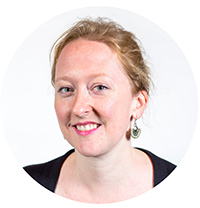 Aurore Canoville is a paleobiologist and a postdoctoral researcher at North Carolina State University in the United States. Her research focuses on drawing paleobiological inferences from the study of tetrapod biomineralized tissues. 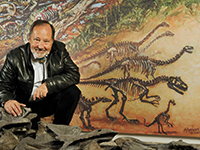 Hans-Jakob (Köbi) Siber studied Old Greek and Latin, went to the USA and took the subjects theater and film at Montana State University. He then turned to paleontology, studied literature on fossils and began his own excavations. In the 1980s, he excavated skeletons of fossil baleen whales in Peru. Later, in Wyoming (USA), he excavated the fossil remains of Morrison dinosaurs from the well-known Howe Ranch in North Central Wyoming for many years. He founded the Aathal Dinosaur Museum in a disused factory building in Aathal, Switzerland, which opened in 1992. Siber and his museum team work together with the University of Zurich and the Swiss Federal Institute of Technology Zurich (ETH Zurich), from which he received an honorary PhD. 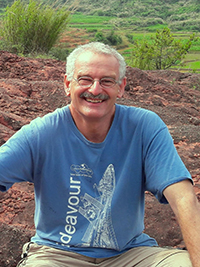 P. Martin Sander is professor of vertebrate paleontology at the Institute of Geosciences at the University of Bonn and previously had been the curator of its Goldfuß Museum for over 10 years. After his undergraduate work at the University of Freiburg in Germany, Dr. Sander obtained a Master's degree at the University of Texas at Austin in 1984 and a Ph.D. from the University of Zurich, Switzerland, in 1989. Since then, he has divided his research interests between the more traditional work in paleontology such as excavating and studying Triassic marine reptiles around the globe, and a more biological approach to extinct vertebrates, using the microstructure of fossil bone as a clue to life history and evolution. A spectacular application was the proof that dinosaurs were subject to island dwarfing. In 2004, Dr. Sander was able to obtain major funding from the German Research Foundation (DFG) for the study of dinosaur biology and headed DFG Research Unit 533 "Biology of the Sauropod Dinosaurs: The Evolution of Gigantism” until 2014. Since 1987, Dr. Sander has authored numerous scientifc papers and books on his research, and since 1995 has trained many graduate students at the University of Bonn.