FIGURE 1. Distribution of sites and geographical features mentioned in the text. Siberian localities are from Baranova and Biske (1979). Shaded areas are shown in greater detail in Figure 2 and Figure 4. Numbers refer to site codes used in Appendix 1 and throughout this paper. 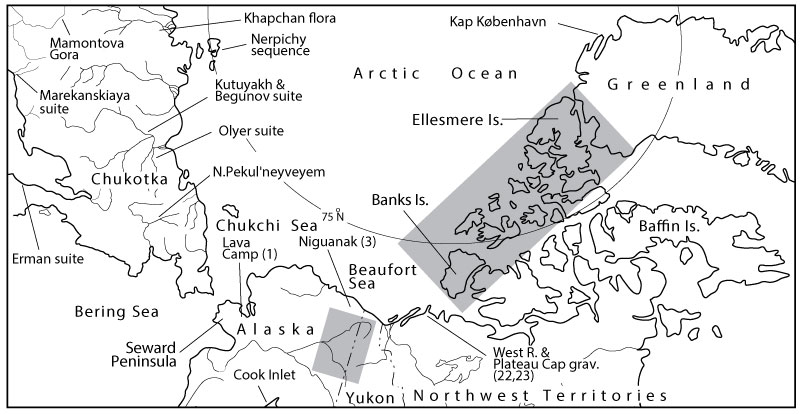 FIGURE 2. Detailed site location maps of sites from interior Alaska and the Yukon. Numbers beside sites refer to site codes used in Appendix 1 and throughout this paper. 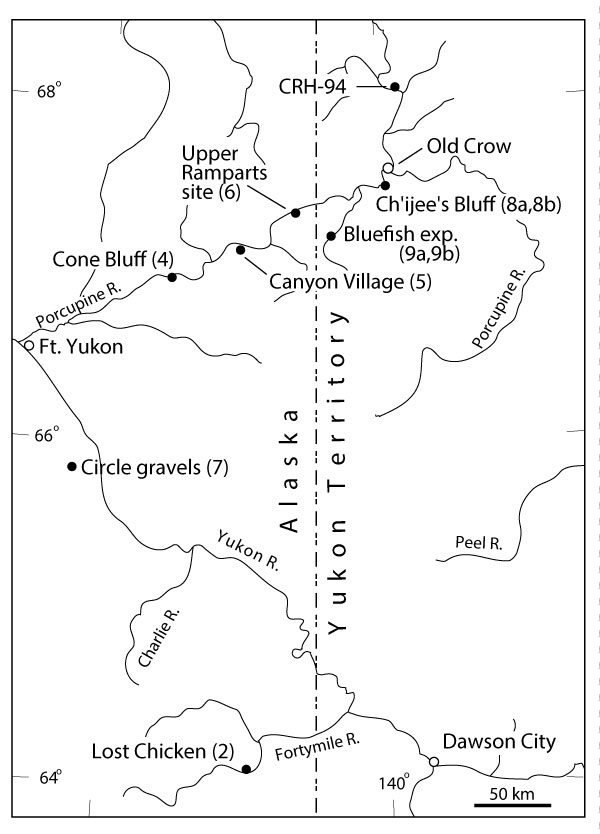 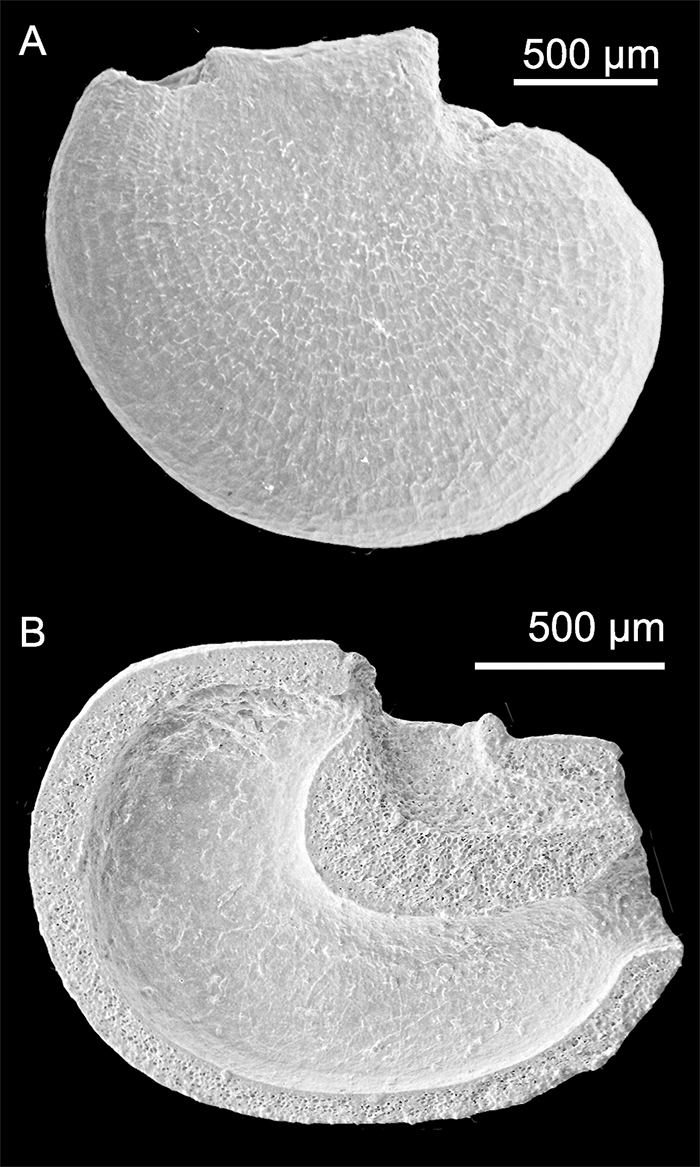 FIGURE 4. Detailed site location maps of sites from the western islands of the Canadian Arctic Archipelago, Canada. Shaded area on map at left indicates the region covered in the map at the right (note rotation). Numbers beside sites refer to site codes used in Appendix 1 and throughout this paper. Un-numbered circles represent Neogene to Early Quaternary sites from which plant and/or arthropod fossils have been isolated. 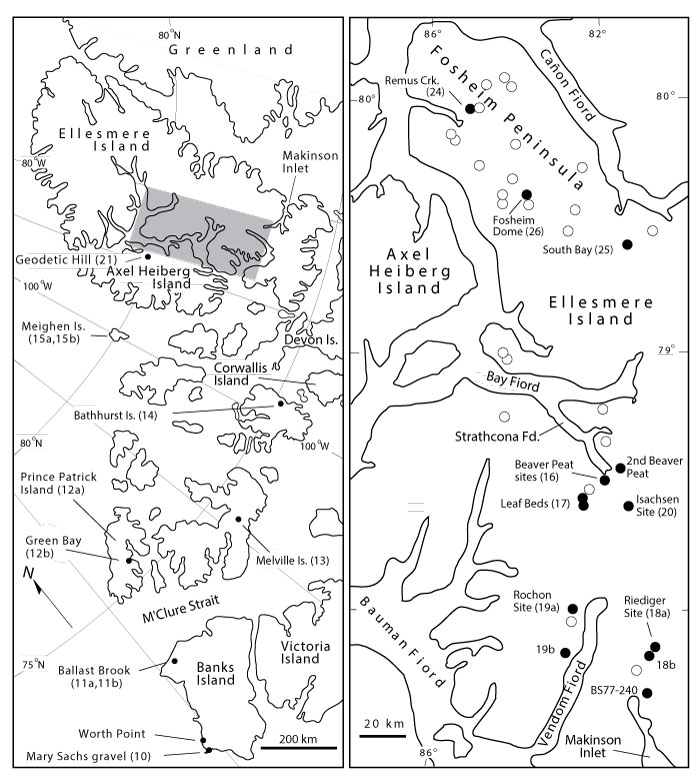 FIGURE 5. SEM micrographs of selected plant macrofossils from Mary Sachs gravel at Duck Hawk Bluffs, southern Banks Island. (A) Microdiptera/Mneme type (Lythraceae), seed, cross-section with germination valve to top, sample MRA 7-18-91-3, GSC 141399; note the absence of obvious dorsal furrows as seen on specimen from the Ballast Brook Formation (Fyles et al., 1994). Germination valve contains approximately ten rows of pits; (B) Parthenocissus? (Vitaceae), half of seed, ventral face showing one ventral infold, sample MRA 7-1-88-2, GSC 141400; (C) Microdiptera/Mneme type (Lythraceae), two joined seeds, ventral view with apex up, sample MRA 7-18-91-3, GSC 141401; note that the specimen on the right contains a fold on the wing, undoubtedly due to packing of the seeds in the capsule. This indicates how one of the characters used to distinguish Microdiptera from Mneme, relative development of the ‘wings’ is likely due to considerable variation even in seeds from the same plant and supports Tiffneyʼs (1981) conclusion about the dubious validity of the many named species; (D) Orchidaceae?, seed, sample FG 91-13a, GSC 141402; (E) Nigrella sp. (Melastomaceae), seed, from the site 3 type section of the Ballast Brook Formation (see Fyles et al. 1994), GSC 141421. 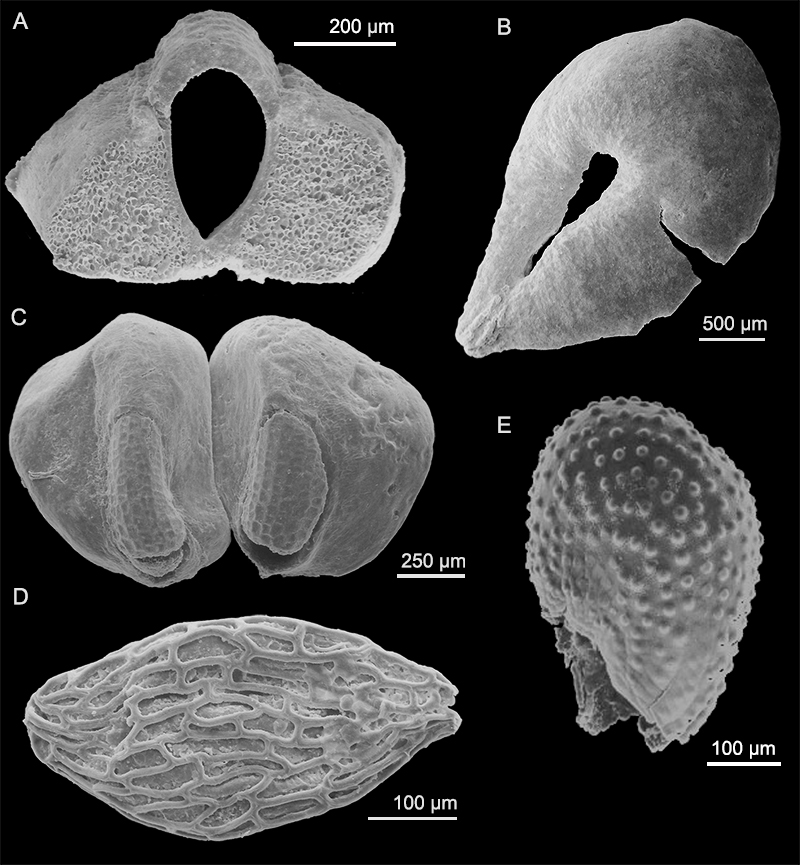 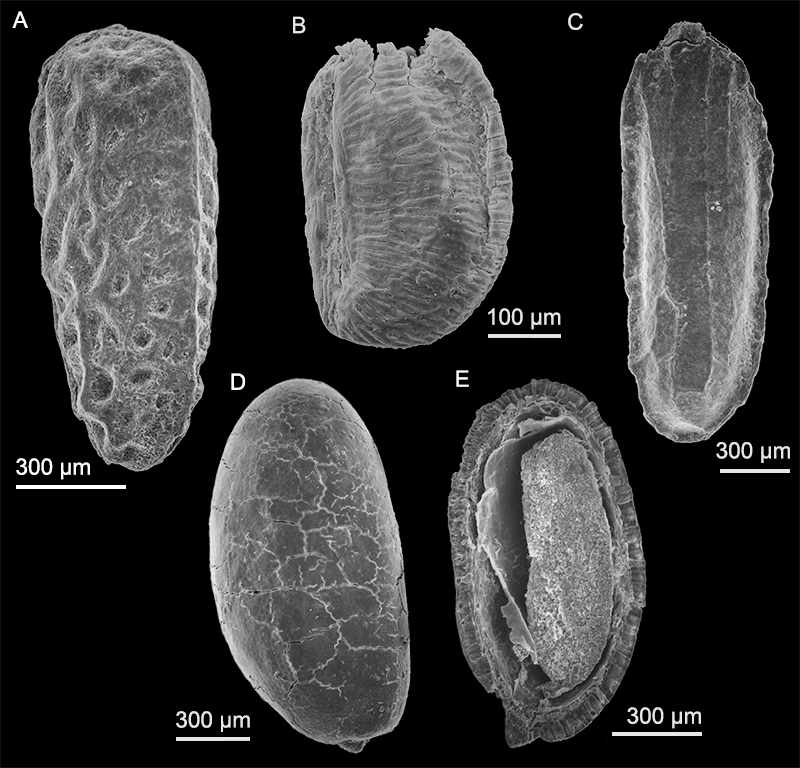 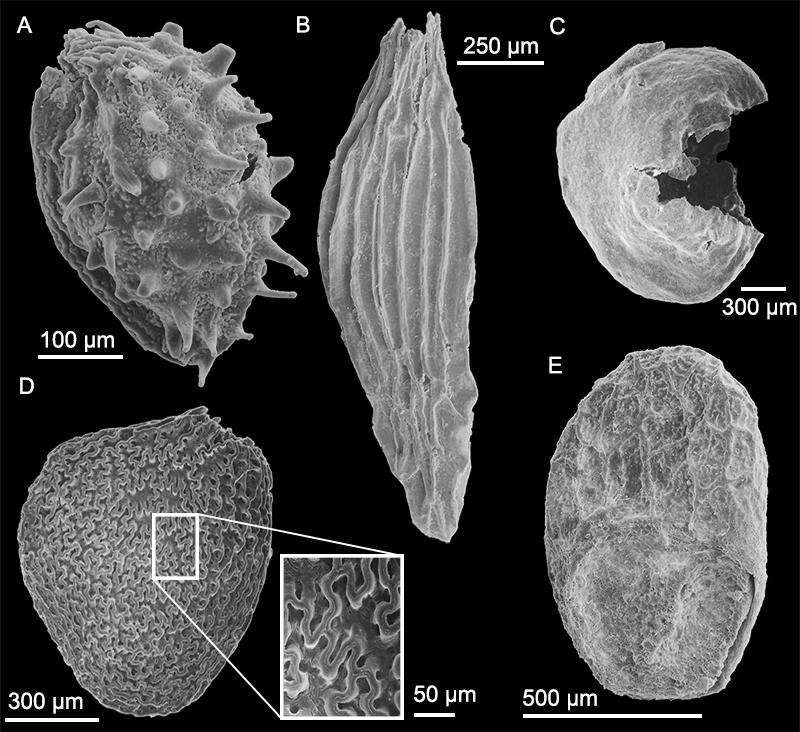 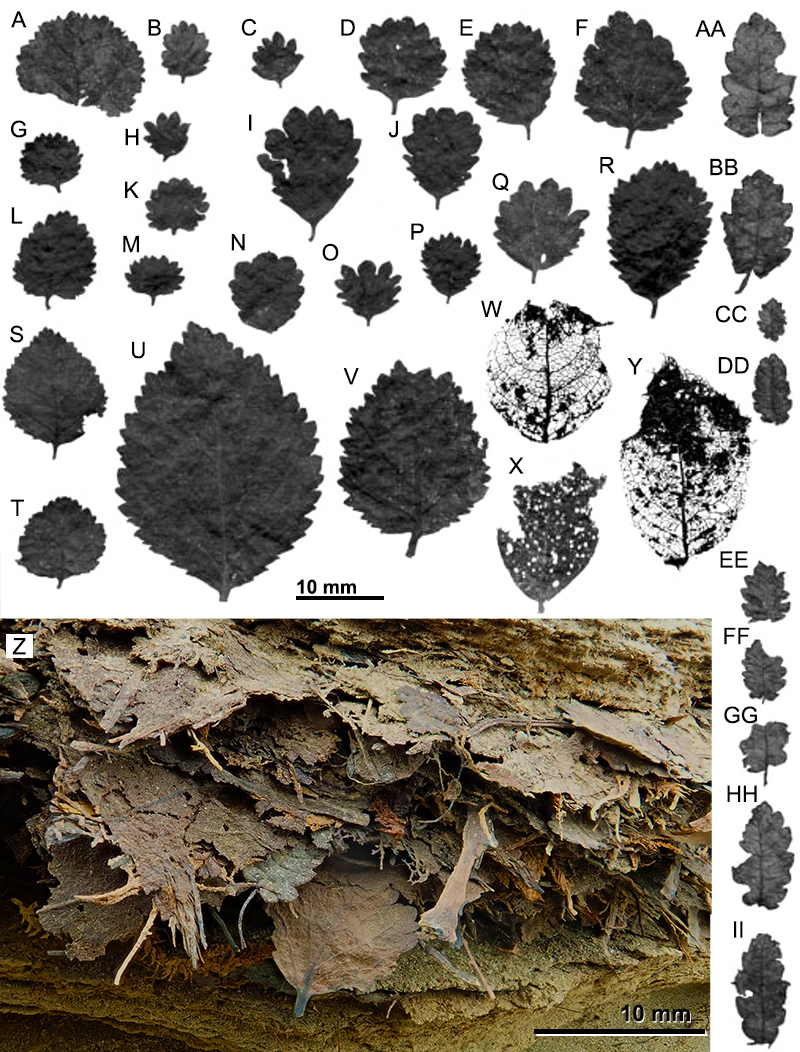 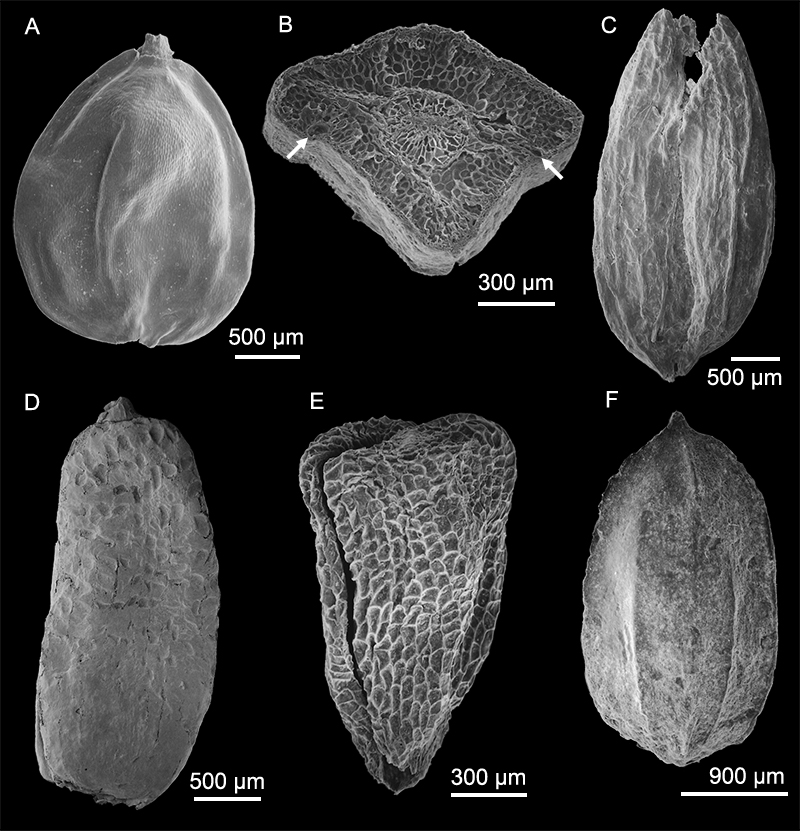 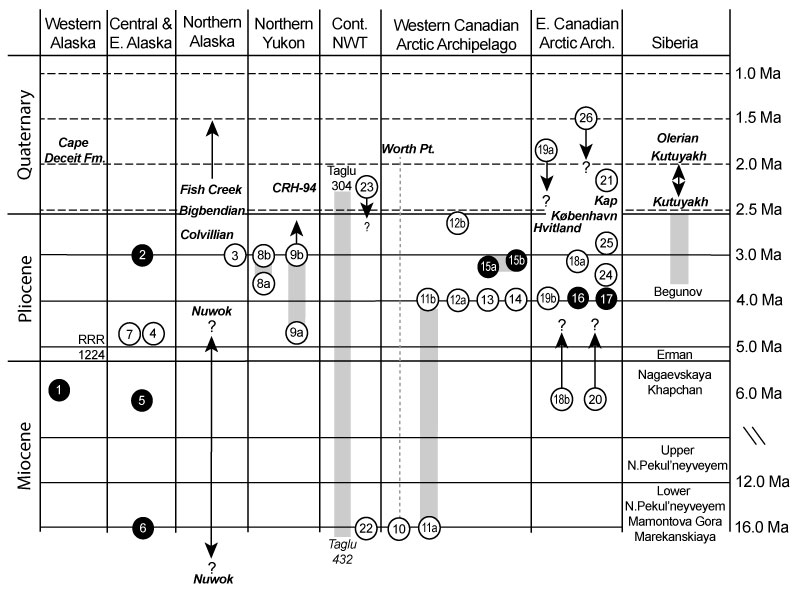 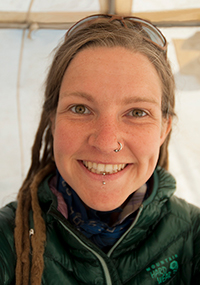 Tamara Fletcher is a postdoctoral researcher in palaeoecology and palaeoclimatology and a founding member of the international research group, PoLAR-FIT (Pliocene Landscapes and Arctic Remains—Frozen in Time). Tamara's primary research focus is investigating past environments using multiple proxies to understand what they can tell us about climate and ecological processes across grand timescales. 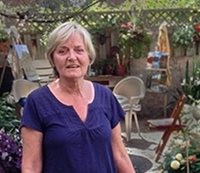 Alice Telka undertook her studies in biology at Carleton University. She spent the first half of her career working for the Geological Survey of Canada studying and dating plant and insect macrofossils. She founded Paleotec Services in 1998, where she continued her work running a successful palaeobiology consultancy. She also was a founding member of PoLAR-FIT.

Alice passed away in 2019, and is missed as a colleague, friend and mentor. 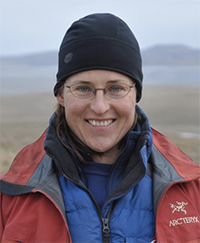 Natalia Rybczynski is a Research Associate in Palaeobiology, Canadian Museum of Nature and an Adjunct Research Professor in Earth Sciences, Carleton University. Her current research focuses on the Palaeobiology of the Neogene Arctic of Canada, and she is a founding member of PoLAR-FIT. 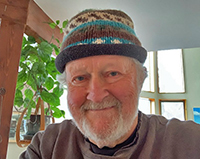 John Matthews worked for the Geological Survey of Canada from 1971 until he retired in 1998. John spent his time as a research scientist specializing in the study of late Tertiary and Quaternary environments using several types of fossils including fossil insects, pollen, and seeds and fruits. In 2015 he became a founding member of PoLAR-FIT.

John passed away in 2021, and is missed as a colleague, friend and mentor.

Sediments at many locations across the Canadian and Alaskan Arctic have preserved plant material from the period 16 million to 2 million years ago. This article presents extensive information on the plants that were present at these sites, it discusses how these plants allow us to estimate the time when they were growing, how they relate to North-East Asian plant communities, and what they mean for how the climate changed from much warmer than present, to similar to modern climate in some regions. We also suggest future studies that would take advantage of unique sites to answer outstanding research questions. 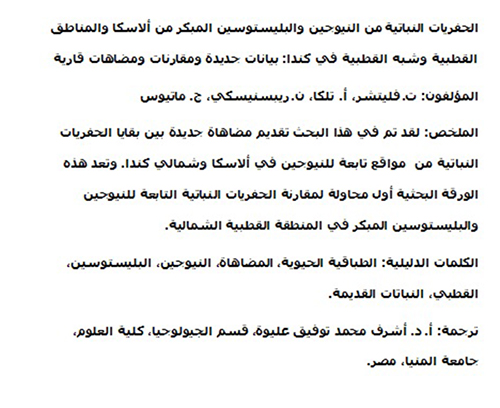 Plant macrofossils from various Alaskan and northern Canadian sites. Appendix 1 and 2 are included in a zipped file for download.

Appendix 1 and 2 are included in zipped file for download.

TABLE 5. Composition of Native, non-native and extinct genera of plants from selected sites in Siberia and North America.