The ecology of Spinosaurus: Authors 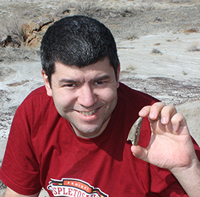 David Hone is a British palaeontologist specialising in the behaviour and ecology of the non-avian dinosaurs and also on the palaeobiology of the pterosaurs. He has have worked and studied in a variety of institutes in the UK, Ireland, Germany and China and is currently based at Queen Mary University of London. 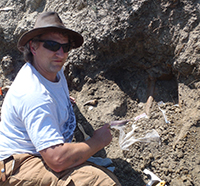 Thomas Holtz works primarily on the evolution and adaptations of theropod dinosaurs (with a particular focus on Tyrannosauroidea), but is interested more broadly in functional anatomy and macroevolutionary patterns. He got his bachelors at the Johns Hopkins University in 1987 and his PhD at Yale University in 1992. He worked on paleoclimate and marine micropaleontology for four years with the Department of Paleontology and Stratigraphy at the US Geological Survey in Reston, Virginia. Since 1994 he has been on the faculty of the Department of Geology at the University of Maryland in College Park, where he is currently Principal Lecturer in Vertebrate Paleontology. He is also a Research Associate in the Department of Paleobiology of the National Museum of Natural History, and serves on the Scientific Council of the Maryland Science Center.