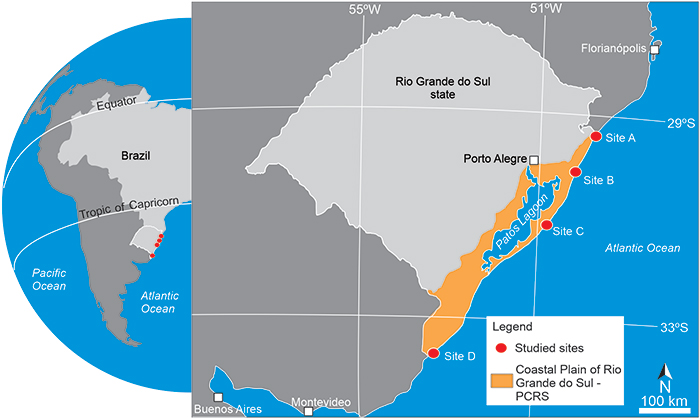 FIGURE 2. Termite nests from site A. General view of the nests close to the shoreline (a), with sparse vegetation of grasses and ferns around the mounds, and detail of external nest morphology with no open chimneys (b) (nest A.6). The hypogean portion of nest A.10 with bottom passages vertically oriented is shown in (c). The schematic disposition of termite nests in site A allow observing that the closest nest is less than 30 m from shoreline (d), and nest’s concentration in the flat areas of foredunes (e), almost 60 m far from shoreline. 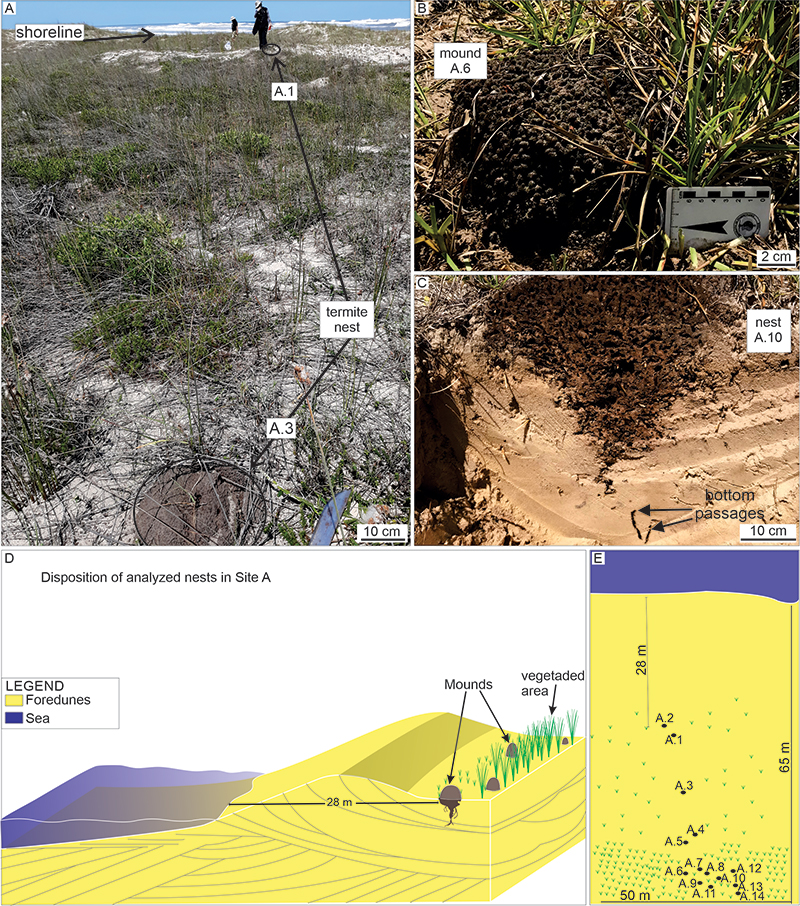 FIGURE 3. Detail of the internal chamber found in nest A.3 (a, b) and the rhizome of ferns used by termites (c). 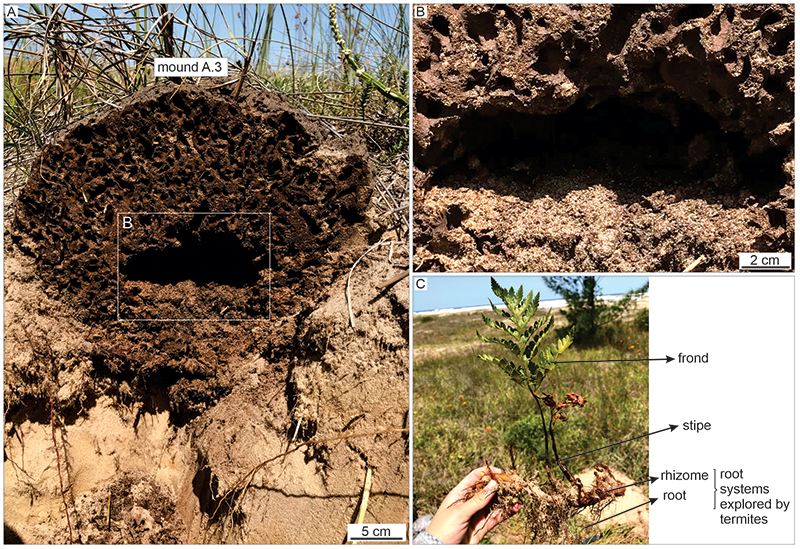 FIGURE 4. Termite nests from site B. General view of nest B.1 (a) and proximity to the shoreline; sparse vegetation of grasses and ferns around the mound. Detailed view of B.1 nest cast (b) and lateral projections mostly inside roots. Detail of the passages inside roots (c), cast by resin. Schematic disposition of termite nests in cross-section (d) and in plan view (e); closest nest is nearly 50 m from shoreline, where the nests are concentrated in interdune settings in the frontal dune zone. 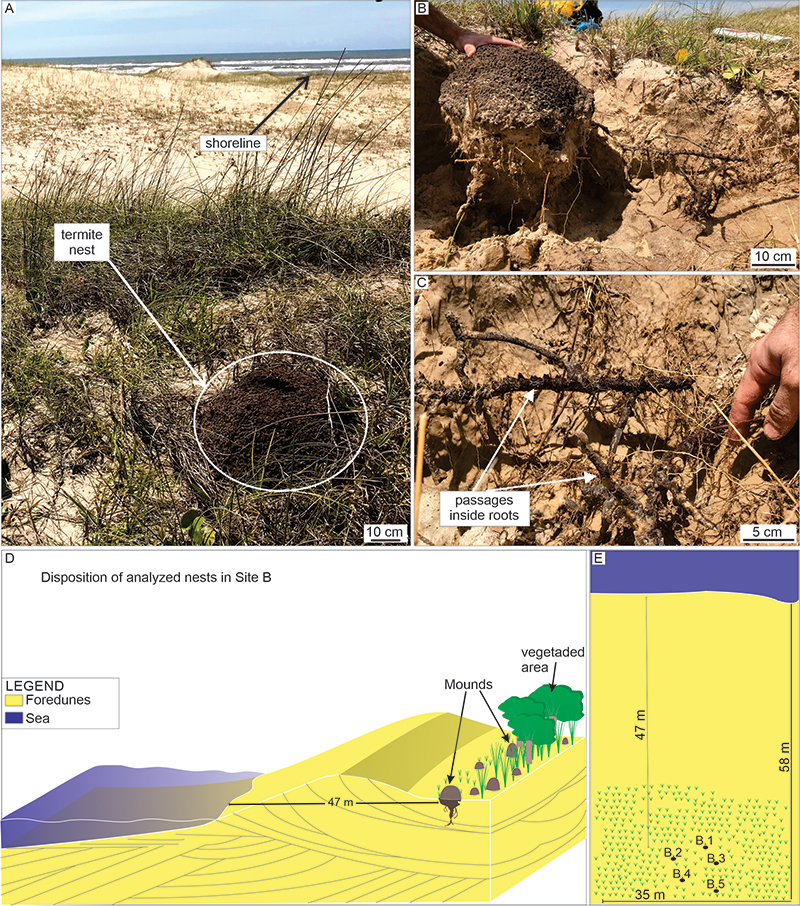 FIGURE 5. Termite nests from site C. General view of nest C.1, next to a stream (a); it is seem a diverse vegetation close to the permanent stream, but the termite nests are restrict to grass. Detail of nest C.1 surrounded by grass (b). Detail of the inner passages of nest C.2 surrounded by grass roots (c). Schematic disposition of the termite nests in cross-section (d) and plan view (e); closest nest is approximately 170 m from the shoreline, where the nests are concentrated in the wet interdune zone. 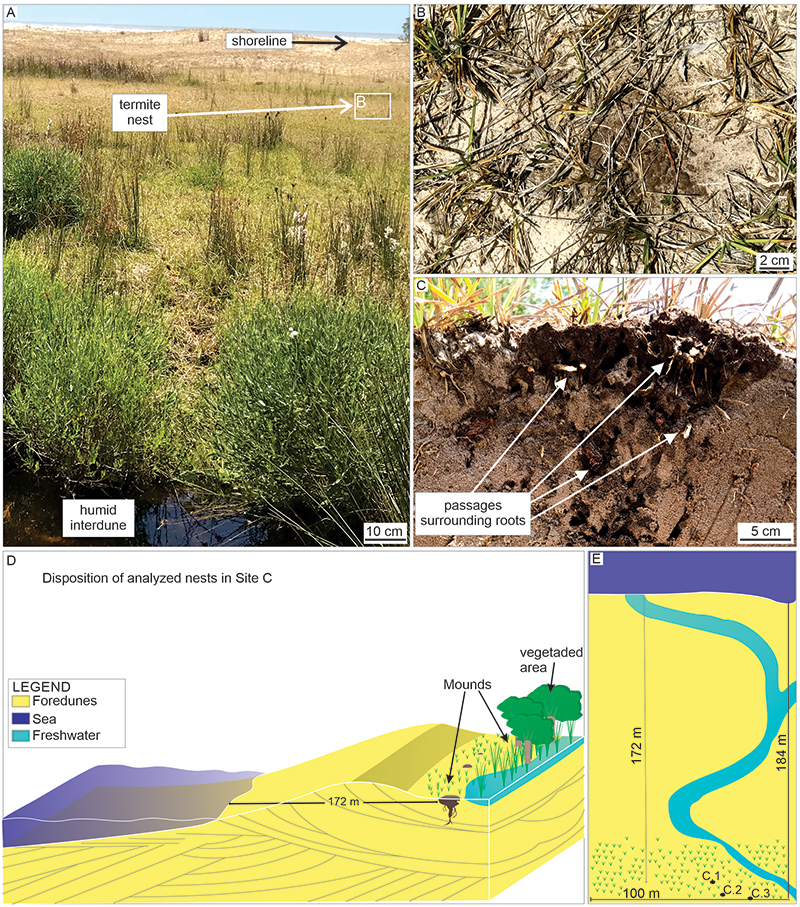 FIGURE 6. Successive cuts in nest C.2 (a-c). Observe a second enlargement below the general funnel in the central portion of the nest (c), while the margins present only a general downward reduction in size (a, b). 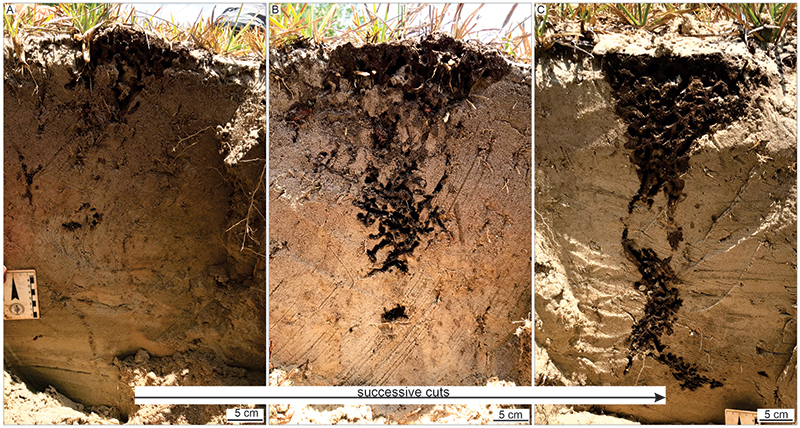 FIGURE 7. Termite nests from site D. General view of nests close to the shoreline (a); grass around the mounds. Detail of big epigeal portion in D.6 (b). Details of the cast nest D.4 (c). Detail of passages of epigeal portion and the surrounding roots in the bottom portion (d). Schematic disposition of termite nests in cross-section (e) and plan view (f); the closest nest is ca. 58 m from shoreline. 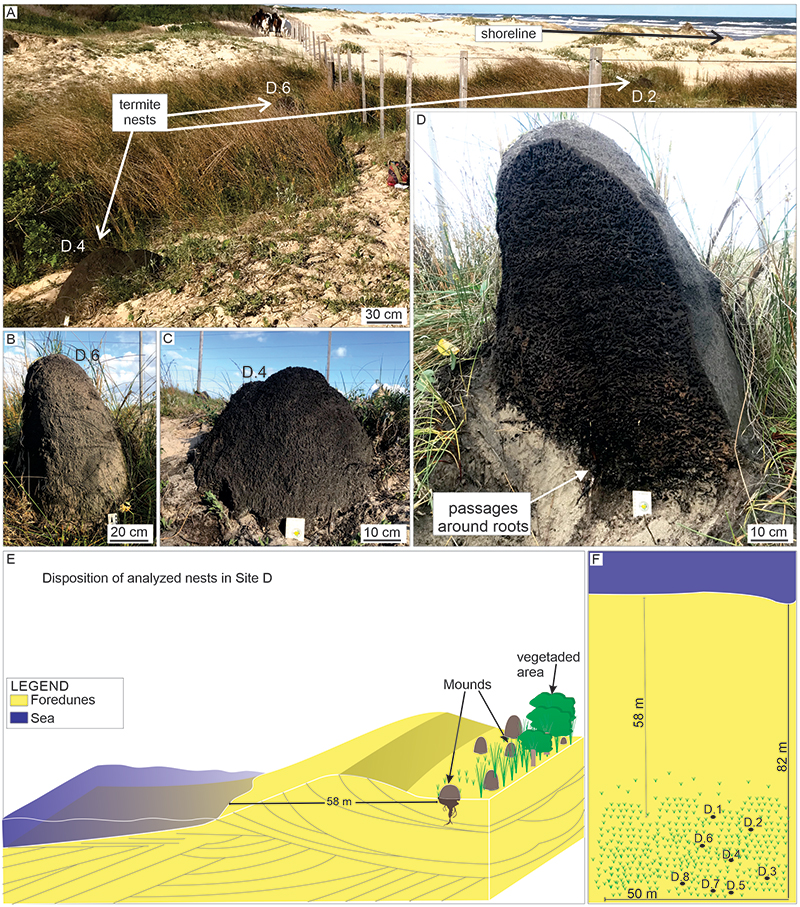 FIGURE 9. Features of the casted nests. A. Photomosaic evidencing the hypogean portion of nest D.4; observe that the structure present two main disposition of passages, with concentrated passages very similar to epigeal portion going up to ~70 deep, and elongated passages mostly vertically-oriented with lateral chambers occurring only in deeper part of the structure; horizontally-oriented passages are more common in the middle of the underground portion, with local globous chambers. Dotted lines colored in yellow represent inferred connections, lost during removal of the cast. B. Plan view of the bottom of epigeal portion, with concentrated pattern of passages (central chamber is absent). C. Casted concentrated passages evidencing a random distribution. D. Walls of passages in epigeal portion, showing high concentration of sand lined by organic matter in its interior (this sample was not casted). 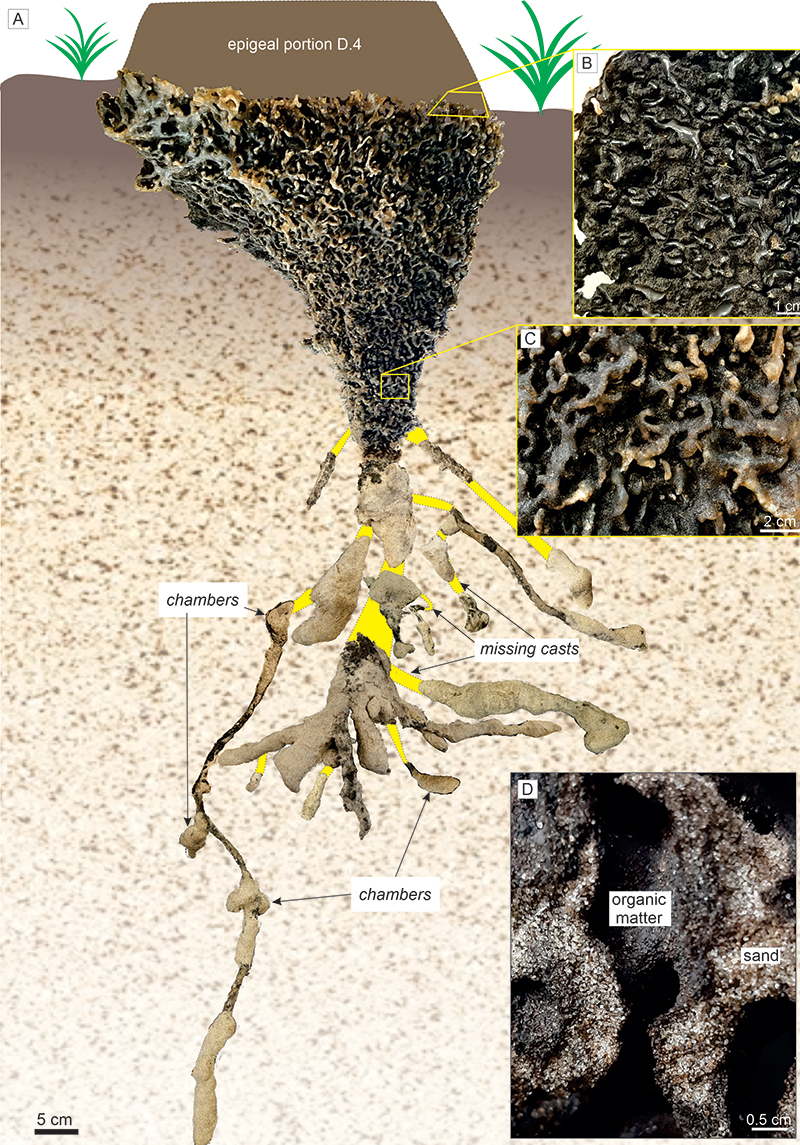 FIGURE 10. Termites collected in site A, identified as Termitidae. Other investigated sites are also represented by termitids. A. General view of an egg (below), a minor worker and a bigger worker (above). B. Detail of an egg with visible termite inside. C. General view of a Termitidae soldier. D. Detail of a soldier with rounded cephalic capsule bearing a conical frontal tube (nasus), with fine extremity. 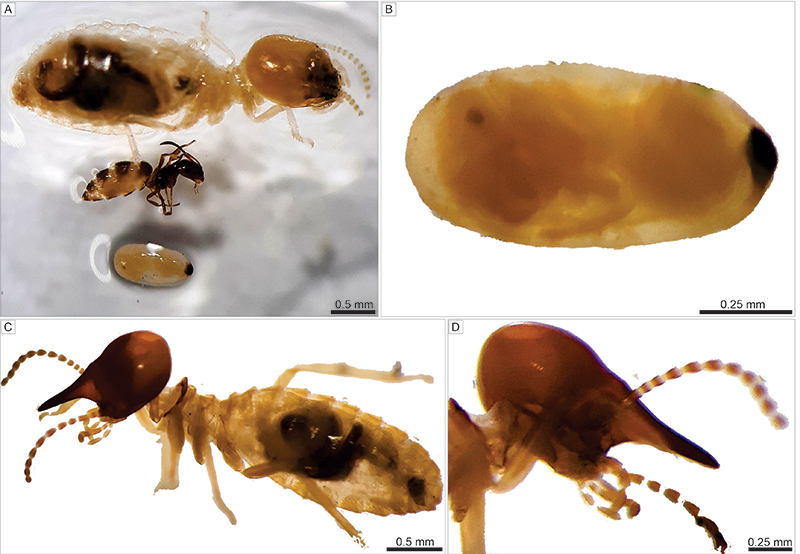