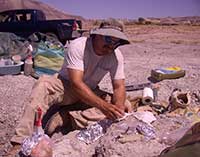 Heckert's research interests revolve around Late Triassic stratigraphic, biostratigraphic, and paleontologic issues, focusing primarily on microvertebrates, but he enjoys ranging up and down the section, and has collected vertebrates ranging in age from Devonian to Pleistocene from across North America. He continues to conduct field work across the American West and studies Triassic fossils from across Pangea.

Photo: A.B. Heckert working at the Krzyzanowski Bonebed in the Blue Hills of east-central Arizona, within a few miles, at most, of where the phytosaur described here was recovered. Photo by K. Cockerill. 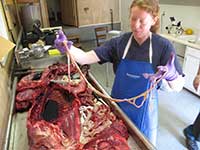 Dr. Viner has been at the National Fish and Wildlife Forensics Laboratory since 2010. She is part of the pathology section at the lab and works with other Fish and Wildlife Service scientists in the fields of genetics, morphology, and criminalistics on crimes involving birds and endangered species. Prior to her work in wildlife forensic pathology, she was a pathologist at the Smithsonian National Zoo in Washington DC, where she worked for 7 years as the associate pathologist. Her veterinary education took place at the Virginia-Maryland Regional College of Veterinary Medicine in Blacksburg, VA. A residency in pathology at the National Zoo and a fellowship at the Armed Forces Institute of Pathology at the Walter Reed Army Medical Center in Washington DC comprised her pathology training. Drs. Viner and Heckert first met as members of the Talawanda High School Marching Braves.

Dr. Viner’s current projects include the use of an alternate light source in the diagnosis of electrothermal injury, post-mortem computed tomography, and the effects of lead in raptors and other avian scavengers. She has served on the board of the International Veterinary Forensic Sciences Association since 2015.

Photo: Dr. Viner admires a tapeworm encountered during a necropsy of a cougar at the National Fish and Wildlife Forensics Laboratory.

Carrano’s recent research has focused on the paleoecology of dinosaur ecosystems, in particular using information from vertebrate microfossil bonebeds. He has also worked on the phylogeny and evolution of theropod dinosaurs, focusing on ceratosaurs and other groups outside Coelurosauria, and has spent 20 years building up the dinosaur-related content in the Paleobiology Database. His fieldwork has primarily been in Cretaceous strata of North America, but he has journeyed to Madagascar, Chile, and Zimbabwe as well.