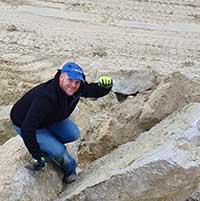 Barry van Bakel, palaeontologist and carcinologist with a track record of over 25 years, studies fossil crabs with the emphasis on primitive forms (Podotremata). He is associated researcher at the Oertijdmuseum (Boxtel, the Netherlands) and current PhD student at Utrecht University. Comparative morphology with extant congeners, palaeoecology and macroevolution are typical subjects of his ongoing work. 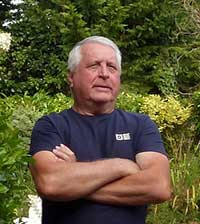 Lionel Maerten, amateur palaeontologist, has been specialising in Bajocian fossils from Normandy (northwest France) for 45 years. He is co-author of several scientific publications concerning ammonites of Bajocian age and discovered several new genera and species of ammonites of that stage, as well as small, co-occurring crabs that are now being written up by an international team of palaeocarcinologists. One of them has been named in Lionel’s honour. 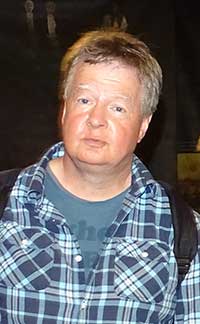 John Jagt has been a curator of palaeontology at the (municipal) museum since 1991, specialising in Late Cretaceous (Santonian-Maastrichtian) and earliest Paleogene (Paleocene) invertebrates such as echinoderms, decapod crustaceans, ammonoid and coleoid cephalopods and some other smaller groups. From time to time, he is also in charge of projects revolving around the excavation, transportation and subsequent preparation of skeletal remains of mosasauroid reptiles from the Maastrichtian type area. John also co-ordinates the activities of a team of 25 private collectors, in the area and serves on the editorial board of several scientific journals.

René Fraaije is a palaeontologist and geologist who specialises in fossil decapod crustaceans, and hermit crabs (Paguroidea) in particular, homing in on their taxonomy as well as their role in former ecosystems from the Early Jurassic onwards. Other ongoing research projects include cephalopod ecology, ichnology, bracket fungi, dinosaurs, cycloids, ostracods, plants and echinoderms. He collected his first fossil at the age of eleven, founded the Oertijdmuseum at Boxtel in 1983 and is a regular reviewer for a number of scientific journals.