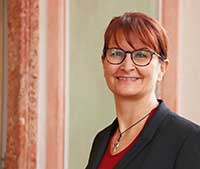 Christina Ifrim started her Post-Doc Phase in the Staatliche Museum für Naturkunde Karlsruhe. She changed to Ruprecht-Karls-Universität Heidelberg in 2008 where she habilitated in 2015. Her fields of research cover cephalopods, quantitative palaeontology, paleobiogeography, platy limestones, stratigraphy, environmental changes and the response of marine ecosystems, mainly but not exclusively in the Late Cretaceous of Mexico. In 2019 she became the head of science in the Jura-Museum Eichstätt. She curates the worlds largest collection of Solnhofen Platy limestone fossils, among them the Eichstätt specimen of Archaeoperyx. She is re-habilitated at the Ludwig-Maximilians-University Munich.

Wolfgang Stinnesbeck studied Geology and Paleontology at Bonn, Germany, and there received his PhD in 1986. For nearly ten years (1987-1996) he was a professor for paleontology at the Universidad Autónoma de Nuevo León (UANL), in Linares, Mexico, until he accepted, in 1996, a professorship at the University of Karlsruhe. In 2007, he changed to the University of Heidelberg where he was a professor for geology and paleontology until 2020. His main fields of interest include fossil assemblages, climatic and oceanographic changes as well as their causal relationship for evolution and mass extinctions, with a focus on Latin America, principally Mexico.