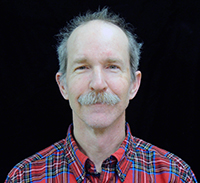 Stephen Godfrey was born and raised in the Province of Quebec, Canada. He has always been fascinated with nature and natural history museums. As an early teen, he began to collect fossils, seashells, pinecones, and skeletons for his own bedroom natural history museum!
He received his B.Sc. in biology from Bishop’s University and a Ph.D. in paleontology from McGill University. Following a two-year Postdoctoral Fellowship at the University of Toronto, he moved to Drumheller, Alberta, the “Dinosaur Capital of Canada,” where he became involved in paleontological exhibit work for museums around the world (Skullptures.com).

In 1998, Stephen became the Curator of Paleontology at the Calvert Marine Museum in Solomons, Maryland where his mandate is to collect, preserve, and interpret fossils from the famous Calvert Cliffs along the Chesapeake Bay. Most of the fossils that he quarries from the cliffs are of extinct whales and dolphins that lived between 8-18 million years ago. 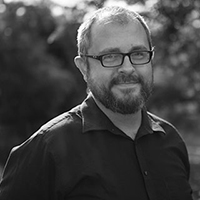 I am interested in the use and development of paleobiological methods, particularly when it comes to identifying ways by which we can learn about the structure and function of organisms from the past and present in terms of how microstructure is reflected in surfaces. The types of questions I tend to ask are open to a broad range of topics that can utilize these methods, including clinical anatomy and paleontology. I was trained as an evolutionary biologist, and many of the questions I ask tend to center of vertebrate evolution.

Evolution is the modification of development by ecology, which tends to aim my research towards questions of how vertebrate ecology and development intersect. Aquatic amniotes are terrific organisms to study these patterns with, as one can find examples of convergent and novel solutions to the same physiological problems. This has often led me to studies of the measurement of direct physical interactions of aquatic amniotes with their environment, specifically tooth wear and paleopathology.

Methodologically I try to answer some of these broader questions along these lines using comparative anatomy and histology, radiological methods, materials science, and comparative methods. I am especially interested in trying to teasing out causal relationships as much as I can, especially osteological correlates of soft tissues and the testing of paleobiological inferences. My focus has mainly been in questions related to the vertebrate transition from terrestrial to aquatic, particularly the mammalian orders Desmostylia, Sirenia, and Cetacea, though I have ongoing work on terrestrial mammals as well as non-mammalian aquatic amniotes. Anatomical regions of interest are especially the integument, sensory systems, and oral biology.